Lime on Papaya, and The Moran Doctrine

Quilter Freddy Moran  famously said that 100 colors work better than 10. The more colors in your quilt, she says, the less you have to worry about them playing nicely together. (Moran is known for her vivid, multicolored concoctions, punctuated by black and white intervals. Here's a Freddy-pattern quilt that my friend Sue and I made years ago, which raised a couple of thousand dollars for a good cause): 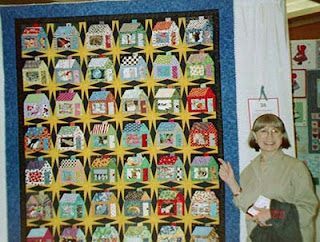 (We did get Freddy's permission to use it as a charity auction quilt. My beautiful non-quilting mother is pointing to it.)

I've certainly found Freddy's Doctrine to be true in my quilting life. And on my family's recent summer vacation, I also discovered that it works for other fibers, too.

Virtually all my quilts are done by machine, so I usually don't usually have  quilting handwork to bring on vacation. But I am capable of knitting a sort of rectangle. In preparation for our vacation, I bought, on sale, a kit from a local needlepoint/knitting store. This kit was a small plastic box packed with a huge skein of yarns - made up of dozens of approximately 15-foot long strands of yarn, every single strand different. A label proclaimed it a "Stash Scarf" and suggested I cast on 100 stitches, then knit each row with a different yarn. 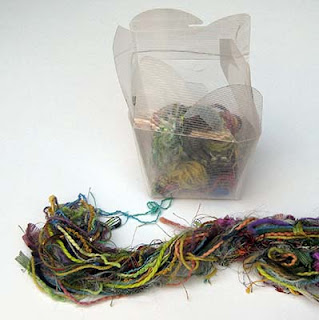 This turned out to be the BEST vacation project. It was so much fun to switch to a different yarn with each row (I'm easily entertained by color and texture). If I ever doubted the Moran Doctrine, this project more than proved it. Although I adored most of the yarns, with many jewel tones, there more than a few featuring  yellow/greens - ugh, my least favorite color. Worse, several of the yellow/greens were conspicuous novelty yarns, with bits that poked out. That made me so grumpy, that I ungenerously decided that the shop was trying to get rid of these unsellable yarns. I seriously considered leaving them out of my scarf.

But, on the other hand, I'm open to surprises. So I  decided to just go with it and see what happens.

So  here's what happened: 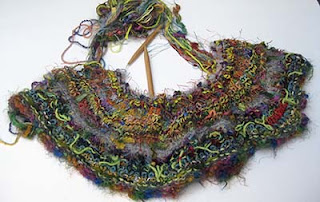 I'm almost done. And it's really not that bad at all! See those fluorescent green strands about an inch up on the project? They're interesting! Small amounts of hideous colors can act like lime on a papaya-- they can give a project zing.

Now, back to the quilt world, and speaking of multiple colors....I'm currently working on a commissioned pillbox hat, (based on one of  the yarmulke patterns I sell),  which is made, mosaic style, from batik scraps. The top will look something like this (here's an earlier version): 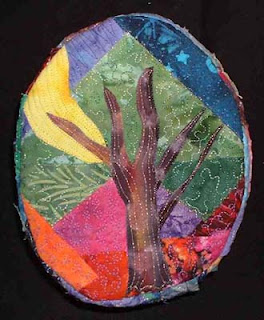 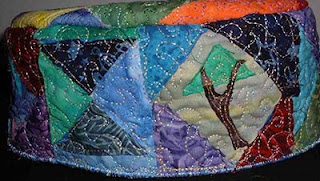 So I had my batik scrap bag out and on my sewing table. Even without any yellow-green scraps, this bag is terrifying. 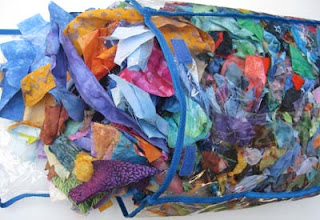 It's about 3 feet long, a foot high, 2 feet wide, and those scraps are really smashed in there, so it's heavy, a multicolored black hole for batik scraps. As I selected fabrics for my hat, I moved the scraps from this  bag, where they reside permanently, into a large Trader Joe's paper bag. The scraps topped out the TJ bag and spilled onto the floor.

I know, I know, THROW THEM OUT! But doctor (I say to my imaginary hoarding-specialized  psychotherapist), I can't throw out batiks, not even teeny tiny pieces!! First of all, they were $10 a yard long before all the other cotton quilters fabric reached that level! So they're expensive AND they have seniority! Third, each is a dab of glorious color! Even a small scrap of batik can contain light, variety and the remembrance of human hands. So NO, my kids are going to have to throw them out after I'm gone. Sorry, kids.

The 'stash scarf' project makes me think: Maybe everything in this not-so-black hole goes together! If I can take the smaller scraps, pile them on to a base, and stitch, stitch, stitch them down, I could wind up with a fabric sister to my knitted scarf! Although it might be rather thick. How about a rug? What would Freddy do?
Posted by Cathy Perlmutter at 7:34 PM