And speaking of healthful quilts....

Did you catch the recent spate of  medical studies which show that sitting is killing us? Long hours in a chair are linked to increased risk of diabetes, cancer and plain old death . (If you want to make a quilt about the dangers of sitting, inspiring yet sobering infographics are here.)

I recently finished A.J. Jacobs' recent bestseller, Drop Dead Healthy, in which the humorist addressed the sitting problem by buying himself a 'treaddesk' - I don't recall the brand, but something like this: 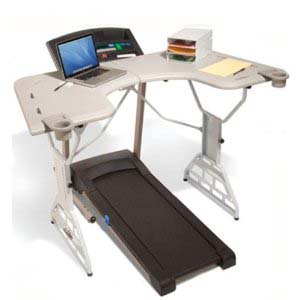 The idea is to walk veeeeeeeeery slowly, while working on a laptop. It's not nearly as difficult or distracting as it sounds, Jacobs says. By the time he finished writing the book, he had clocked 1100 miles and lost an impressive amount of weight.

Two more testimonials are on this video. Summary: Two lovely ladies who work in hotel reservations switched from regular to treadmill desks, over their boss' doubts. They  lost 35 pounds each, and continued to do an excellent job booking rooms. They look incredibly fit and happy - you'd think they were park rangers who spent their days hiking through beautiful wilderness. Even the boss is thrilled!

The scary studies, glowy women and anecdotal evidence set my friends and me abuzz. Should we buy, or even build, a treaddesk? How about a cycle desk ?  (Same idea, but on an exercycle). 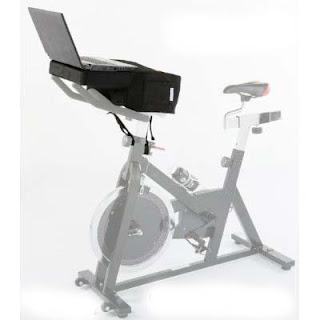 Or maybe a  wee under-the-desk stepping machine, like this and this (one of many brands, not an endorsement). Could they possibly work? 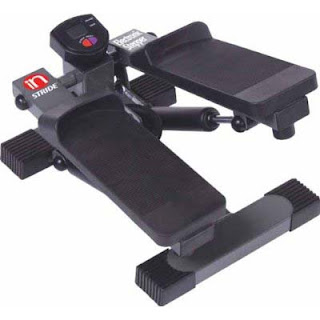 That, naturally made me think about how to get more exercise while quilting. After a few moments of thought, it struck me that sewing machine designers invented treaddesks more than a 100 years ago... 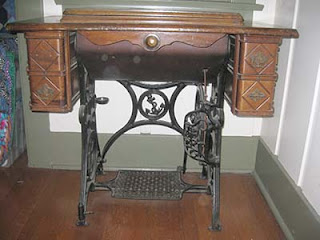 I'm not much of an oracle, but now I'm ready to predict that handcrank and treadle sewing machines are going to make a huge comeback. Not only do they provide exercise, but they're also about as "green" as you can get. (Plus, they have really cool bobbins.)

The antique treadle above is from Germany, with nautical detailing, and it has served for years as a  tchotchke-display dust-catcher in my house. The ironwork underneath features several elaborate, hard-to-dust anchors and chains. (Why would a 19th century German sewing machine have a nautical theme? Was this machine intended for use on boats?) 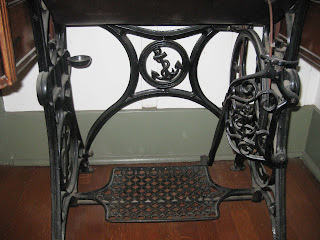 .
The goldwork on the machine itself is glorious. There's a Botticelli-esque long-haired woman holding an anchor on the top right of the machine - sorry I couldn't quite capture it with the photo. The ellipticals at my gym don't have anything like it. 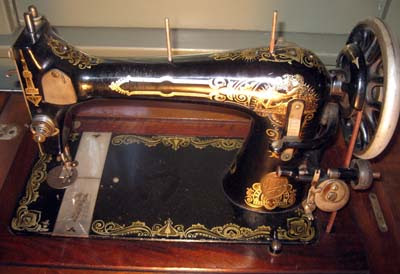 While I'm in a prophecizing mood, I'm also seeing a day, in the not too distant future, when antique treadle sewing machine bases will be added to ordinary desks and tables for a shabby chic, vintage approach to exercise. At the dinner table of the future, everyone will treadle as they eat. Even La-Z-Boy recliners will bow to the overwhelming medical evidence, and install pedals in its reclining foot rest. People will be able to watch tv, recline AND exercise, all at the same time.

Research about the hazards of sitting suggests another important health strategy for quilters. Quilters should squat, lift, carry to the garage, and toss in the trash barrel all those lovely magazines and books about making our sewing space more efficient. Next,  rearrange everything in the sewing room in the least efficient manner possible. That ironing surface that you strategically placed right next to your machine? Set it as far away as possible. Your rotary cutting setup should, of course, be in another distant corner - better yet, of another room. If your sewing area is in the basement, store your fabric in the attic, and vice versa.

OK, so you'll be perpetually annoyed, and get less done, but you'll also become more fit! The energy and the years you add to your life will doubtless outweigh the extra time it takes to finish anything!

Posted by Cathy Perlmutter at 7:35 AM