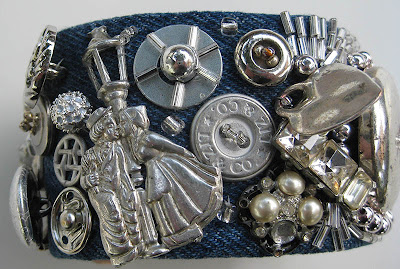 I wore this bracelet yesterday to a crochet gathering. It was my first visit to the group, and this bracelet, though not crocheted, is a can't-miss conversation piece. One person who examined it proclaimed, "Now that's a charm bracelet!"

Before her declaration I would have described it as an extreme embellishment quilting project. I became fascinated by 'encrustation' four years ago after reading an article by quilter Frances Holliday Alford titled 'Outrageous Embellishment,' in the 12/07/1/08 issue of Quilting Arts magazine. (That article is now in a free e-booklet that you can pick up here.)

Alford piles objects on top of objects - charms, toys, buttons - in strange and fascinating ways. You can't stop looking. She lays them down so close that it's difficult to see the background. Compared to her encrustation, my project is restrained!

As a base, I used a strip of aged denim, starting at about 4" wide by about 11" long. It's folded the long way in thirds, so it's only about  2" wide finished, and there's a 2" strip of interfacing inserted inside. All the pieces are stitched on with grey pre-waxed Silamide (size A), through a layer of denim and interfacing, before the sides and ends were folded in to the middle back.

I added not just beads, buttons and sequins, but also snap halves, hardware washers and nuts, a ball chain lamp pull, single earrings, broken vintage rhinestone shoe buckles, and, of course, a piece of a bobbin [bobbins = best embellishments ever]. Old and new, as long as it was mostly silver in color, it qualified. 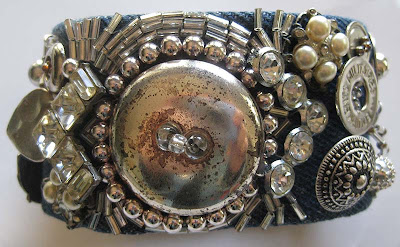 (Come to think of it, the silveryness gives it a shot of steampunk). That sandal in the center of the shot below is a scrapbooking tchotchke. The oval above it is a sew-on beveled mirror. There's an alphabet cube bead next to the sandal. 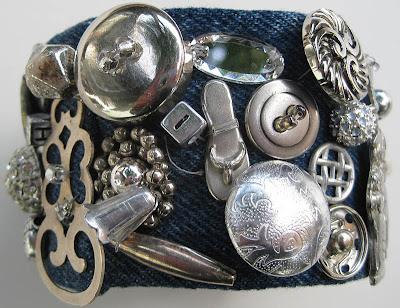 In keeping with the upcycling theme, I finished the inside with a strip from a blue patterned men's necktie, fused in place. It covers the seams. 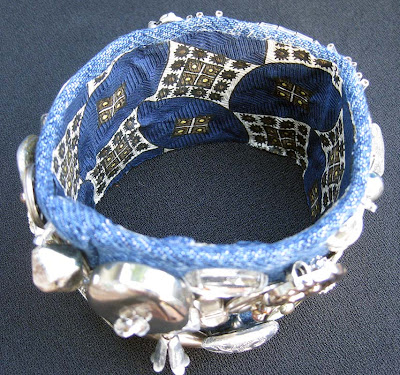 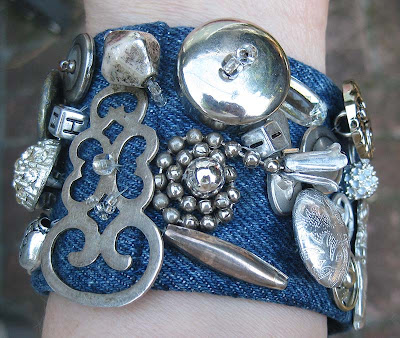 As I was working on it, I thought not only about Alford's work, but also about  folk art memory vessels.  (I promise you will thank me if you visit the latter link.) I saw one of these in person a decade ago at a flea market, and still haven't recovered from its greatness.

So try some extreme embellishment! You'll not only have a ton of fun, but it will take a significant bite out of your hoard!

Update: An astute reader also pointed me to a memory jar quilt made by quilt artist Terrie Mangat. It's in the ninth row from the bottom, on this page. I admired Terrie's fabric in an earlier post.
Update II: Shared on Nina Marie Sayre's Off the Wall Friday. Check it out for creative quilt art!
Posted by Cathy Perlmutter at 10:02 AM