While on my denim vessel kick (which lasted for 1, 2 weeks), and my tote bag kick (always), I also made this. 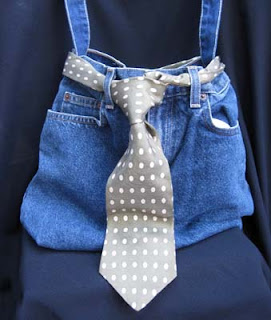 It's a vessel in a way - a  hobo-style bag cut from one pair of jeans. This is an incredibly quick project - cut off the legs, sew across the bottom a couple of times for strength, stitch in the strap ends (in this case, a denim belt from a long-gone dress), and you're basically done. Neckties and other embellishments are gravy.
The hardest part for me was determining the correct way to tie the necktie. I assigned Local Teen to figure it out with the help of the Internets. So blame cyberspace for that lump on the right. 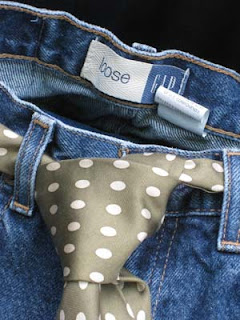 Lump notwithstanding, I'm proud to say that Local Teen said she would be seen in public with this purse! (Wearing something Mom made! Huge!)

But then we showed it to Local Husband, who took one look at it and began giggling uncontrollably. Is your mind also in the gutter? I decided that perhaps he was right - the dangling  phallic symbol tie ends were not ideal. I certainly did not want Local Teen carrying a Weiner-Filner Memorial Bag. So I untied our hard-won knot, and retied the tie into a one-loop bow. It's still got a slightly dangling end, but it's less of a protruding phallic symbol better than before. 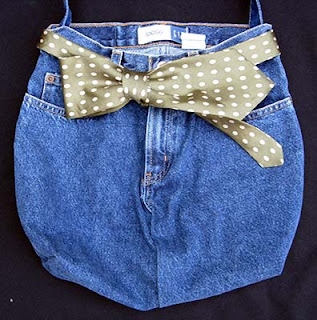 I made it up as I went along. When I was done, I thought about writing up a tutorial for this blog, but, being lazy, checked Youtube first. Good thing I did. There are approximately one half-zillion how-to videos for this jeans-top-to-hobo-handbag concept. Here's a really detailed one: Part One; Part Two. (Although the music is too loud in parts, you can easily figure it out.) Part Two shows how to measure for and install a lining, which I haven't done.

If, like me, you have a vast stash of neckties, and don't know which one to  choose, remember that polka dots make everything better!

P.S. Here's an interesting variation, using a different fabric for the base and handles.

Posted by Cathy Perlmutter at 10:16 AM