The Hills Are Alive, With Awkward Freemotion Quilting

In February, my daughter was a singing nun in her school's production of The Sound of Music, and as a result, I've got the tunes seriously stuck in my head, If you continue reading, you will too.

Humming led to drawing, and if you're over 40, and/or a Lady Gaga fan, you'll know exactly what I'm humming here:

I even stitched it out, just to prove it's possible:

Yes, it's raindrops on roses, whiskers on kittens, bright copper kettles, warm woolen mittens, brown paper packages tied up with string (Theseareafewofmyfavoritethings, phew.) All easy to draw and connect, with only a little backtracking. But suddenly, the song's mood turns dark:

When the dog bites, when the bee stings, when I'm feeling sad, I think about all the stuff I've hoarded, and a great big smile comes to my very simple face. Freemotion fans, I discovered that if you run facial features into the side of the head, you won't have to lift your needle or cut the thread. It takes practice and you may wind up with disturbing skull shapes.

The next verse was much more challenging:

Here's a  closeup of my sketch for the last two, schnitzel w/noodles and wild-geese-that-fly-with-the-moon-on-their-wing (I ran out of paper on the right side, that's why the goose is so stumpy): 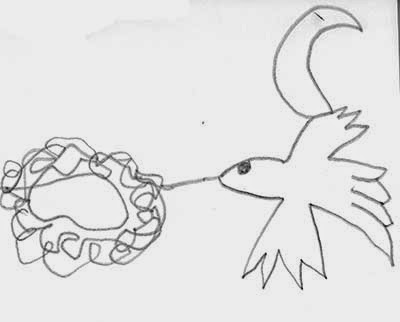 Now  you are saying to me, "OMG, Cathy, that schnitzel is a hot mess, even by your low standards!" You are right! But look at this actual Internet photo of schnitzel with noodles! The stuff is literally a hot mess!

The final lyric of the song was the hardest:


Girls in white dresses with blue satin sashes,
Snowflakes that stay on my nose and eyelashes
Silver white winters that melt into spring.

The sashed dress wasn't bad. Freehanding a snowflake,without marking or tracing, turned out to be murder. It has to have six points, and they should be more or less equidistant? After numerous disasters, I started with an asterisk in the middle, then backtracked to add points, eyelashes, and the bottom of a nose.

OK, so it's not "snowflakes," it's one giant suffocating killer snowflake. Why wouldn't that be someone's favorite thing? The last line, I interpreted as a snow-covered tree struck by sun on the right side until leaves emerge. Admittedly, it's a stretch.


At our non-schnitzel dinner a few days later, my family test-sang other showtunes for freemotion quilting potential. One idea - speaking of hoarding - was the Little Mermaid song - "Part of That World" - but when we looked up the lyrics on our dinner smartphones, we discovered they are stunningly vague:


I've got gadgets and gizmos a-plenty
I've got whozits and whatzits galore
You want thingamabobs?
I've got twenty!
But who cares?
No big deal
I want more

So back to Sound of Music. it occurred to me a few days later that it has another noun-strewn song: Climb Every Mountain, Ford Every Stream...

The streams, in the middle above, could alternatively be interpreted as: Eat Every Bacon. Then comes Follow Every Rainbow (or Enter Every Igloo).... 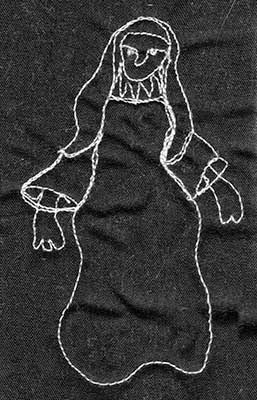 (That's my daughter, the singing nun with transparent wrists. She sang so beautifully, I'm kvelling. She deserves a freemotioned wholecloth Sound of Music quilt, no?)

PS: There's nothing new about quilts inspired by Broadway musicals. To see recent quilts based on Wicked, go to this page.
Posted by Cathy Perlmutter at 8:42 AM