You know those famous newsmen who got into trouble recently for claiming they were in combat, when they actually weren't?

Well, I sympathize, because I thought I was selling this quilt as a pattern, and just discovered that I'm not: 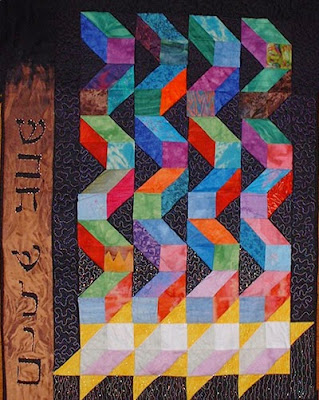 From the sublime to the ridiculous, I interpreted it visually this way: Six days a week we run back and forth, from right to left, like abstract rectangular cubic chickens. On the seventh, as the sun  sets, we  stop, take a deep breath, and look at a candle flame and think deeper.

The blocks are all paper foundation pieced. For the lettering, I cut Hebrew letters from freezer paper, and ironed them to a black fabric strip. Then I painted the strip with dishwasher gel. (These days, you're better off using Decoulerant - much less toxic). In five minute increments, I washed more and more of the gel off the strip. Yes, it was a mess! But it worked, with a nice gradated result.

I liked this quilt so much that I drafted an 8-page single spaced pattern for this quilt. I churned out 10 dense, single-spaced pages of directions, including this map: 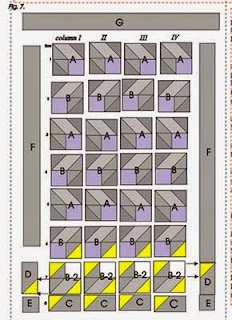 And paper-piecing patterns for the blocks: 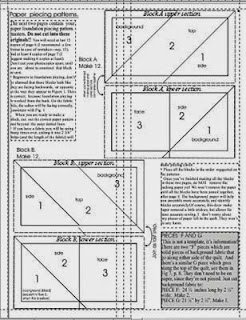 A wonderful quilter named Joan Garland of Georgia, even tested it for me! 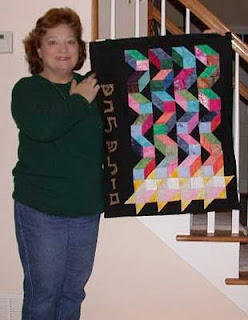 She found some errors, which I am pretty sure I corrected. Thank you Joan!

I hadn't thought much about this quilt for a long time, but quite by accident this week, I came across photos. My first thought was, "Didn't I make a pattern from this quilt?" My second thought was, "I don't think it's been selling very well." So I checked my my pattern page to see if it's for sale - but it wasn't! Hmmm, that probably explains why sales have been so slow.

A dozen years later, I know I will never wring profit from this pattern. So I think I'll donate it to the archives of the Pomegranate Guild of Judaic Needlework (pomegranateguild.org. Unpaid endorsement!)  But in order to do that, it needs many hours of fixing up. Are enough people interested? Is it worth my time?
Posted by Cathy Perlmutter at 7:46 AM