I felt both excitement and fear when a California family contacted me with a request for a tallit, a prayer shawl, that would be used in a bat mitzvah held at the Western Wall - in a month.  I had other commitments, and couldn't start working on it for a week. Three weeks is not a lot of time.

They wanted a tallit that would reflect their daughter's interests. They also wanted it to illustrate the theme of "journey."

I immediately thought of flying geese, a traditional patchwork pattern:

( I have used them in matzoh covers to represent Exodus/ 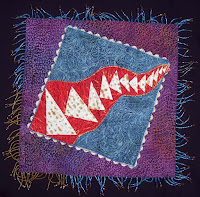 )
For tallit purposes, they could also represent a trip to Jerusalem. So I sent the client some quick sketches:
Meh. They weren't impressed. I had to up my game.

I decided to look up maps of Jerusalem.  I found this wonderful 1660 map on the Library of Congress website. 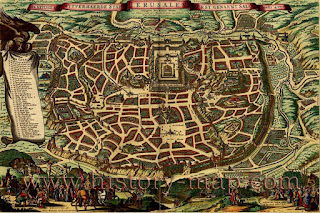 At the time, I was also working on the quilt I described two weeks ago, and last week, inspired by Caitlyn Jenner and vintage phrenology charts... 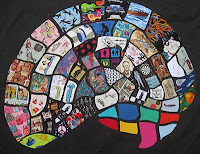 It immediately hit me that the Jerusalem map bears an eerie resemblance to my appiqué brain, upside down. I thought the map would make a similar abstract design, with similar construction methods. I did some quick computer drawings, showing the client how I might trace and abstract the map shapes: 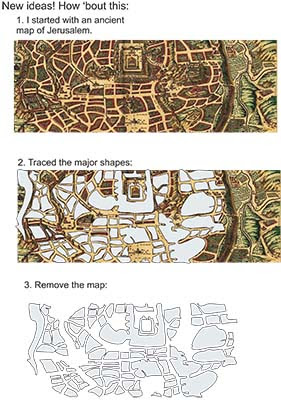 The clients wanted magenta, lime green, and a little gold, thus these colors:

They loved the idea! The next question was whether they wanted the map in two segments (one at the bottom of each tallit end), or one piece (across the back) I did two more computer-sketches: 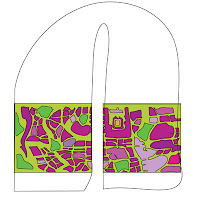 \
They picked the first above. And they also wanted dupioni silk.

Three seconds after I said "yes," I realized I was in trouble.

The brain quilt was relatively quick and easy because I used well-behaved cottons, raw edge appliqué, and fusible web. But for the tallit, all the edges of all those pieces would have to be turned over, because dupioni frays when you glare at it, which you will.  Turning and stitching so many pieces was going to take a very long time. (If only I'd consulted quilter Cheryl Lynch's blog, I would have learned about a fusible that works well with dupioni!)

But I didn't, the clock was ticking, the contract was signed, and there was nothing to do but.... 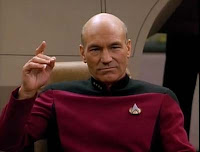 I began by importing the map into my favorite art program (CorelDraw). I printed it out to legal size, then brought it to a copy shop, where they upsized it to 50". (for stripes that wind up about 24" wide, the width specified by the client.)

I taped it to my patio doors, and then taped freezer paper, waxy side down, over it. (the freezer paper is not really brown - it's white.) 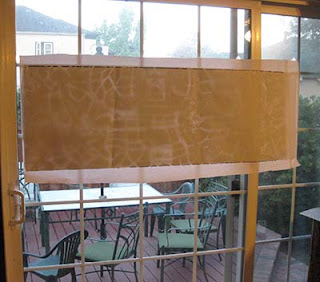 I traced all the pieces. If they were tiny, I combined them. I wound up with over 100 pieces. I combined some of the tiniest pieces, to bring it into the realm of feasability. 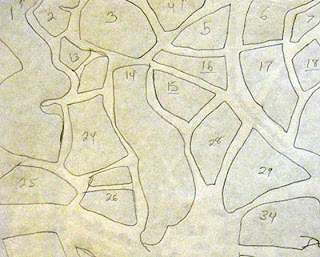 To save shipping time and maximize certainty, I shopped for the fabrics in person rather than ordering online. My friend Linda and I spent an afternoon in downtown Los Angeles, which is a joyful adventure if you're not working on deadline, but can be stressful if you are. We found a shop with a fantastic assortment of dupioni colors. After hours of juggling and comparing, here's the palette we purchased: 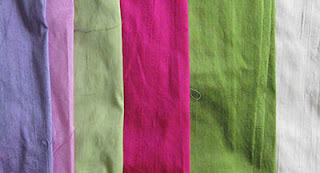 The photo doesn't do these fabrics justice. They have a gorgeous luster. I specifically asked the shopkeeper if the colors were colorfast. he asserted they were. (He lied: See Dupioni Near-Dyeing, below). Linda and I added shades that we felt toned down the deeper colors. The white is more like vanilla, to echo Jerusalem stone.

The first step was to cut the green fabric to 18" x 50",  and lay the freezer paper pattern on top. Then came the meditative process of cutting each paper piece, one by one.  I used an xacto knife, and slid cardboard between the freezer paper and tallit front. 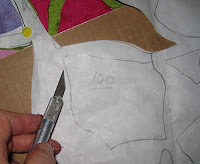 Once each piece was cut out, I brought it to the ironing board and pressed it to the dupioni: 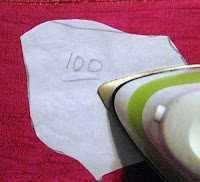 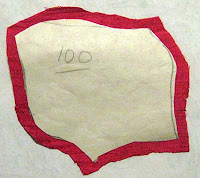 Clip concave curves. Working from the back, add dabs of  school glue (It dries clear). 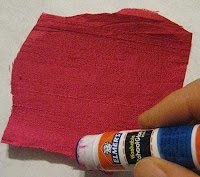 Keeping the paper on, working from the back, turn under and press all the edges. Then slide the piece back in position. (It was here I realized I had a dupioni dye problem*. See below. Once I'd resolved that problem, I continued.) 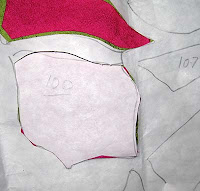 Peel away the top freezer paper. Glue edges, one by one, in position onto the green background. 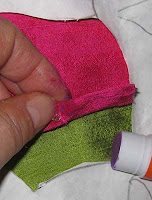 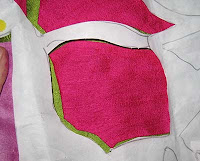 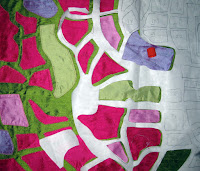 Every foot or so, I placed tearaway stabilizer behind the segment. Then, I rolled the sides, inward, incorporating the stabilizer and the freezer paper (and smushing it. It's sturdy and didn't tear). 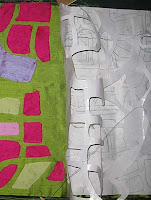 Next, I carefully manipulated the mass/mess under the machine's presser feet. It's awkward, especially in the beginning. The more you do, however,  the more freezer paper you can remove from the completed side, so  it gets easier. I surrounded each piece with a zigzag stitches, using metallic gold thread and a Microtex needle. 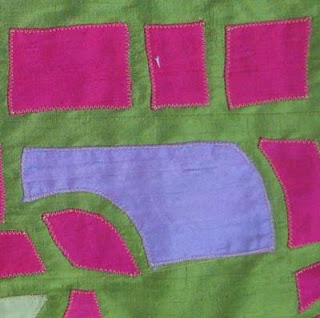 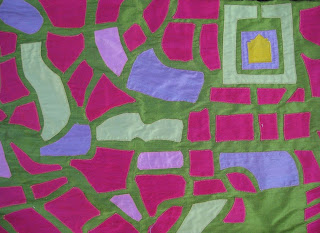 Once stitched, the backing stabilizer must be torn carefully away.

(See any resemblance to the original map?!)

It gave me spilkes to cut that thing in half. I stitched the pieces to a 25"x 72" piece of vanilla fabric.

When the tallit is shut, the map is complete. 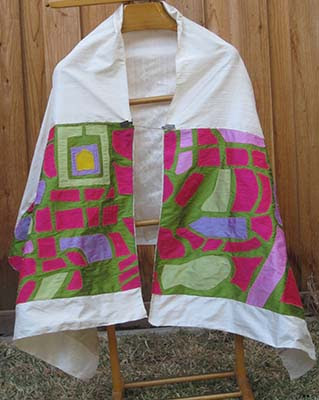 As  you can see above, there are no corners or fringe yet. This was the point at which I had to send it off. The client wanted machine embroidery galore - a Hebrew-embroidered collar strip, plus their daughter's name, plus personal symbols in the four corners, plus a statement about journeys - 7 embroideries in all. I don't have an embroidery machine. The family had found someone near them to do it in their time frame.

I also made them a reversible kippah, from the pattern in my handy-dandy yarmulke book, with green on one side.... 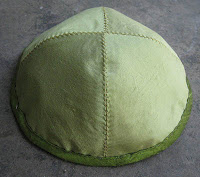 ...and light magenta/pink on the other. 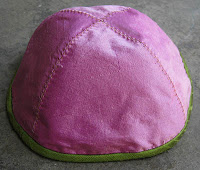 The case is heavily quilted with the same gold metallic thread used on the map pieces. 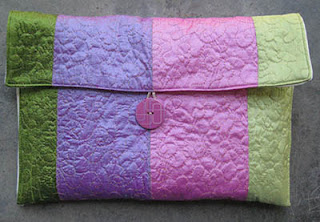 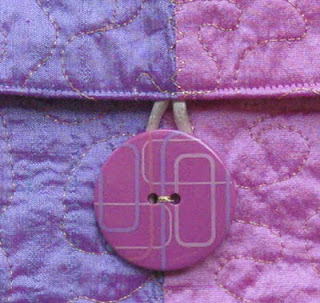 That divine button had been looking for a good home for years! Yay! 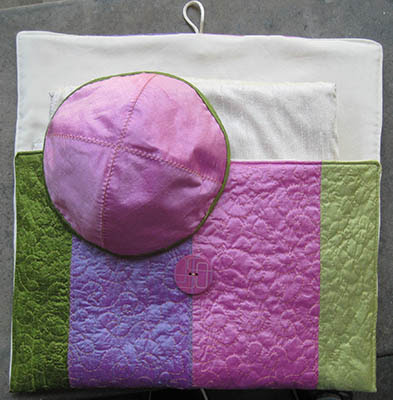 Ta daaa! Done with a few days to spare!

One more tip: If you are interested in creating a mappliqué of your favorite town, be sure to check the copyright restrictions. The Jerusalem map I used did not appear to have any, judging from the Library of Congress information that came with it.
+++++++++++++++++++++++++++++++++++++++++++++++
*A Dupioni Near-Dyeing Experience
Silk dupioni comes in luscious colors and has a beautiful shine. It can also be very challenging to work with.

When I started turning under the edges of the first or second map piece, as described above, I realized to my horror that the spray starch I was using to harden the turned edges was causing the dark magenta fabric to leach. My fingers were turning deep pink.

Horrified, I cut a small piece of the magenta dupioni, soaked it in water, and placed it on a white paper towel. The latter quickly turned dark pink, confirming that I was in big trouble.

I called the store where I had bought the silk. The person who answered the phone spoke only one word: "No", including, when I asked why yesterday's clerk yesterday had promised me that the fabric was colorfast: "No;" When the shop's owner might return?"No;" "Later today? "No;" Tomorrow? "No." etc.

That was hopeless, so I called a reputable online store that sold dupioni silk for premium prices and asked them if their magenta was colorfast, thinking that if it was, I would order an overnight delivery. They told me that they did not guarantee color fastness for any their dupioni. They recommended dry cleaning only. I checked around with a bunch more online vendors - and they all said the same thing.

Google offered astonishingly little in the way of answers to: "How do you make commercial dupioni silk colorfast?" Online friends made very helpful suggestions, including steaming, boiling, rinsing with vinegar, and more. But no one had completely set leaching dyes in commercial dupioni.

I called Dharmatrading.com, a wonderful fiber art supply company. The customer advisor was herself a dyer, which brought my blood pressure down a few notches. She told me her procedure for making home-dyed dupioni colorfast: She simmers it on the stove in a gallon or so of water, adding a fourth cup of vinegar every 10 minutes. Then she rinses out the vinegar, and washes the fabric with synthrapol.

True, her home dye's chemistry was probably completely different from the commercial dye in my fabric. But hers was the most specific action plan that I had heard, and it incorporated elements that many people had mentioned.

I already had some Dharma Trading synthrapol from previous dye-running disaster; I ran to the supermarket for white vinegar, and set to boiling, stirring, vinagering, rinsing, synthrapoling, rinsing, rinsing more, drying, pressing and testing. I did all this on the magenta fabric only - thank heavens the other colors did not run.

The procedure didn't halt the dye release, but it brought the amount waaayyyy down. Fortunately, it didn't change the luster or the hand (which washing dupioni, especially in hot water, can do, so always test a sample first!)

The finished tallit was sent off with an explanatory letter specifying that they should strive to keep it dry, take it off if there's a miraculous July rain in Jerusalem, and dry clean it only. I purposely left the magenta out of the kippah and the carrying case, to minimize the danger.

While writing this up, I found some helpful resources in stitching and laundering dupioni (though none of them would have solved the violent running problem). Don't make anything from dupioni silk (or any other silk), until you read these:

As for me, I'm going to think twice (and charge double) before I make another dupioni tallit - especially if it has any deep red/magenta in it.

I'd love to hear about your adventures with dupioni dyes.
Posted by Cathy Perlmutter at 8:27 AM