Batik Scraps Yearning to be Used

I am such a lucky person, because I have wonderful friends, and sometimes they bring me their scraps - their tired, their poor, their huddled/smushed masses of fabrics and unwearable garments, yearning to breathe free, to leave their teeming homes, where they are neglected, to be brought into my teeming home, where they are admired and then neglected, but if they're lucky, they get cut up and put into a quilt.

One of my all time favorite donations was this green chicken fabric (originally on burgundy - I think it's from Africa). How do you begin to thank someone for a thing like this? 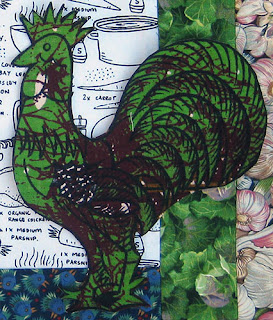 Thanks, Alex. My other favorites are batik scraps. Giving a quilter assorted batik scraps is like giving a musician new notes, or an artist new colors. It opens up new universes!? Three quilty friends have been especially generous with their batik scraps, including Saraj, Kay (yes, the famous appliqué queen), and Jeri. Thanks to all three of you! I can't remember which one of you gave me the pile with numerous premade components, like these: 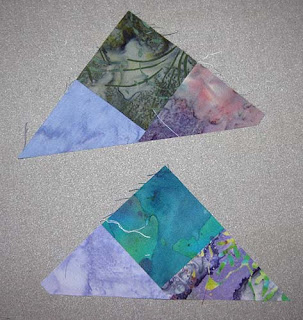 I wanted to make a gift for another dear quilting friend, so I decided to see if I could make a small wallhanging/table runner.  I joined them with dark blue batik triangles, plus a few red triangles. Then I played on my design wall. Play along with me! Experiment 1:

Meh. Experiment 2: This would be a very tricky table runner with those concave angles. 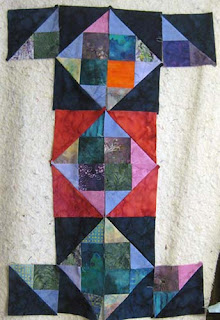 It also works as the letter "I". And if you turn it sideways,,,, 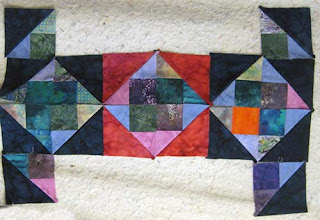 ...it's a lightweight set of barbells!? Keep moving. 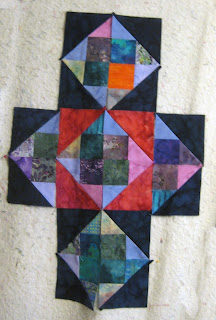 Nice, but a bit of a crucifix look, not my forte, plus the inner angles will be challenging to bind. 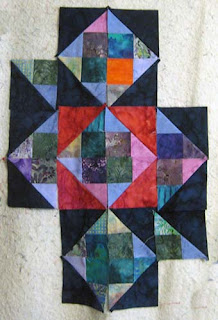 Hmm, its like a pinup person with one hand on her/his waist, one on her/his head. (Update: My friend Ellie says it looks like a person in a kimono, waving.) It's a maybe.

Experiment 5: A stairwell, with a capital "S" 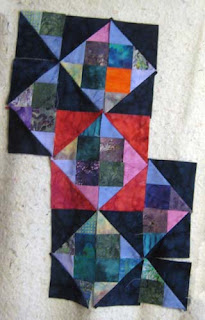 Experiment 7: For someone whose initials are M or W. 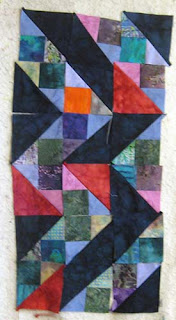 And so on. Which would you pick? I went with the last one, even though I'm making it for someone whose name doesn't begin with M or W.

Now it's all pin-basted, and awaiting the return of my 80s-era Bernina sewing machine  - my only machine capable of freemotion quilting. The poor machine is enduring an extended stay with an OSMG (old sewing machine guy/gal), where it (the machine, not the person) awaits a lifesaving gear transplant. Here's how the piece looked in this morning's sunshine, awaiting the final steps! 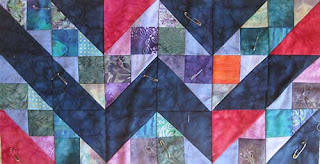 Disclaimer: Please do not send me your scraps, even if they're batiks. I have no more room for them. OK, if it involves an unusually-colored chicken, you can send me that one, but nothing else. I mean it. Maybe.

Posted by Cathy Perlmutter at 4:14 PM