The Secret in My Stash: Warning: Adult Content, with Brief Mention of Childish Presidential Politics

Warning: If you're sick of presidential politics, are squeamish about anatomy, and/or you're under 18, don't read this.

These days, I look at my teenage daughter with awe. At 17, too young to read this, she is teetering ever closer to adulthood; so innocent, so wise, so funny, and so eager to leave the nest.

I always assumed she would learn My Secret after my demise, clearing out my sewing room, when she's a world-weary middle-aged person. But recent events forced my hand.

It was at dinnertime Friday, the night after the March 3 Republican presidential candidate debate, My husband was out of town, so it was just the three of us at the table: me, my daughter, and her phone.

"Honey," I said, "there's something I've been hiding from you for many years. It's something even your father doesn't know."

She looked worried. "What is it, dear mother?" (In my ideal world, family members converse like Little Women. In reality, she slowed down her texting hand and said "Huh.")

Fortunately, she burst into laughter and made me prove it.

Sometimes you struggle to bring forth a quilt; and sometimes a quilt thrusts itself upon you, just comes to you, propels itself into the world. I started this quilt the next morning, and finished it that night. I'm thinking of calling it "Banner for the March 3, 2016 Presidential Debates". 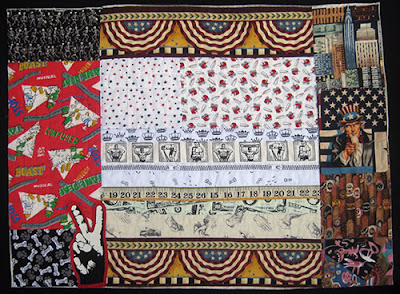 Below is the central portion. I bought the controversial fourth fabric up  from the bottom (above the measuring tape) in the 1990s, when 'controversial fabric' was an oxymoron. 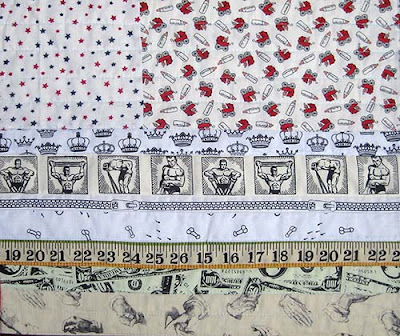 It was made by Rainbow Resource Co., which vended at the Glendale Quilt Show in Burbank, California. The company creates overdyed and silkscreened fabrics, including novelty fabric with funky objects strewn about, like chickens and shopping carts. Their G-rated fabrics can be found on their website, here.

In a discreet lower shelf of their booth, I found the box with the fabric in question. It was fun just hanging out in that booth, ogling the unique wares, and listening to the giggles and screams when customers came across the adult-rated pieces.

At the time, I was youngish, and rarely asked myself, "What  are you going to DO with that fabric?" I bought it because It Was There. The Internet was just a fetus seed baby dot; one-of-a-kind fabric had to be seized lustfully purchased immediately.

Once the fat-quarter was in my stash, of course, I realized that I could not conceive fantasize think of a use for it. Also, I would have a difficult time explaining it to my children, who were way too young to appreciate anatomical irony. So I smushed it way in the back of a fabric shelf, and there it sat, lo these many years, uncircumcised uncut.

Until Thursday's childish Presidential debate called it forth from my own childish depths.

The quilt also included this entertaining fabric from a shirt: 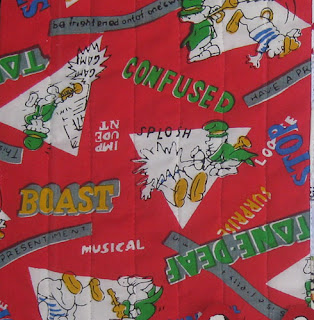 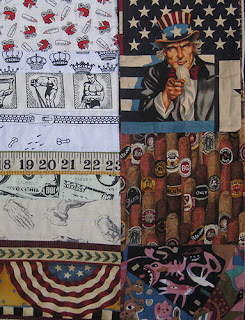 Plus skeleton fabric to remind us that while it's electoral stupid season, what's at stake in the upcoming elections is a matter of life and death for billions of people. 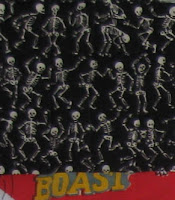 Lest anyone think I am picking on the GOP, I also threw on some former Presidents who had an assortment of well-publicized organ containment challenges. All three are Democrats. 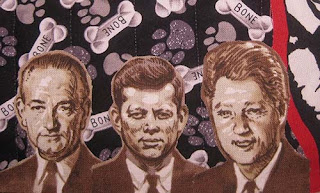 Here's a New Republic article which provides historical perspective: "The Presidential Penis: A Short History." Author Jeet Heer points out notes that every US President so far has borne this particular organ. Controversy about its dimensions and doings have long been part of our politics. "The only way to stop American presidents from alluding to their penises," Heer writes, "is to elect a woman."

It could happen. Does anyone happen to have any extra ovarian fabric smushed in the back of their stash?

UPDATE: 3/17/16. I am amazed by the number of people who have written to ask me how they can get their hands on buy that manly fabric. I wrote to Rainbow Resource, and they still have it!  Owner Charlene Younker wrote:

"Yes, I still sell my hand silkscreened pieces of penis fabric. I currently have it printed on solid red or natural Kona cotton, also a yellow tape measure cotton print that I have overprinted it on, and a few other colors are available. The pieces are about 14x18 inches and sell for $4.50 or $5.50 each depending on fabric chosen. Interested readers of your blog can call me at
707-937-0431 between 10a.m.-5p.m. Pacific time zone to order, or check my schedule and find my vendor booth at a quilt show near them."

No financial affiliation! There's another option -  I just went over the custom fabric printer Spoonflower.com - typed "penis" in their search window, and up came several possibilities, from the anatomically correct to the highly stylized. Pricey, but they may have just what you are longing for want!
Posted by Cathy Perlmutter at 6:05 PM