Nature put on two high-altitude shows last week, one astronomically stupendous, and the other meteorologically harrowing. We are all worried about people in the path of devastating tropical storm Harvey - they don't need quilts, but we can donate funds to a variety of helpful agencies.

For those of you in need of a distraction from the storm news, let's discuss the eclipse. How was yours?  Here in Los Angeles, I felt a bit let down. At 62% coverage, the world didn't look any darker. Birds didn't flock, dogs didn't bark, everything seemed normal.

But as an opportunity to commune with humanity, it was a blast! I rendezvoused with my DH at Cal Tech in Pasadena, where he works. This campus is normally so quiet that you rarely see more than one person at a time walking its shady paths. But on eclipse morning, it was thronged with joyful crowds. I had to park a half mile away, and hike in. The event sponsors ran out of viewing glasses long before I arrived. Fortunately, my DH had obtained some in advance.

Gazing through the glasses, I kept thinking: A little smiley face in heaven!

More thrilling were contraptions people made or enlisted into the effort to watch safely. There were welding helmets, and cereal boxes with aluminum foil patches. And I especially loved these two physics students' clever colander contraption: 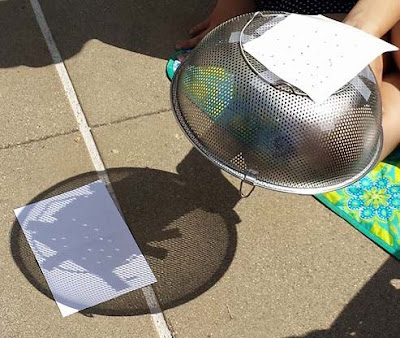 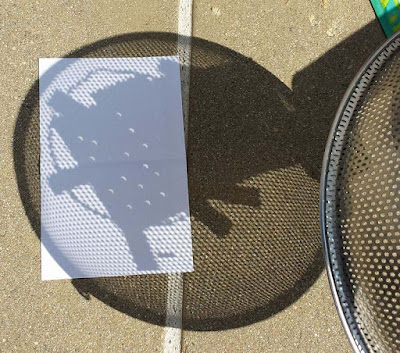 Now I am trying to figure out what kind of fabric art piece this inspires. NASA people to share their eclipse-inspired art, as I explained in my blog post last week. The deadline is September 15, and the rules are at go.nasa.gov/2qoqTis. (I am assuming that an art quilt fits into their "mixed media" category.)

My friend Anne Finkleman witnessed the eclipse from Atlanta, where they had 98% totality. Here are some pictures she took outside of her office building of the eclipse's shadows coming through tree leaves, which act like a giant colander. I think I'm going to base my NASA quilt on her very cool images (I have her permission!) That brick pattern is so similar to log cabin piecing. 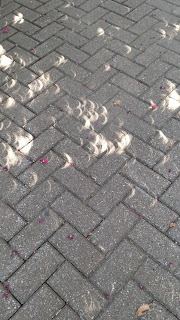 Here's another image she took of a different sidewalk. This sidewalk has squares on point. 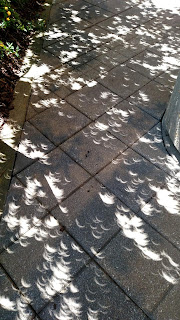 That is a lot of smiles. Which brings us to the question: how to render this kind of image effectively. Applique? Thread painting? Last week, I mentioned bleach discharge as a way to get a spacey effect.

Since then, I dug out and photographed this experimental piece made a decade ago, as a failed attempt at an astronomy-themed prayer shawl for my son's bar mitzvah. I ended up going in a different direction, but I still have it, made with Decoularant on black fabric (safer than bleach, no toxic fumes, no financial affiliation). It's over 2 yards long:

It's based on this famous NASA photo of a spiral galaxy: 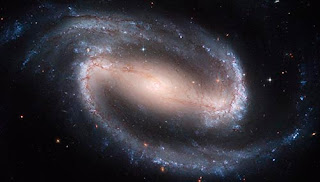 I just painted on the Decoularant, did a little overspraying with more from a spray bottle, ironed and washed, and the results were pretty cool. Here's the front, center. 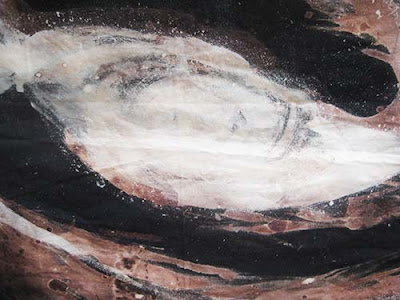 And the back, center: 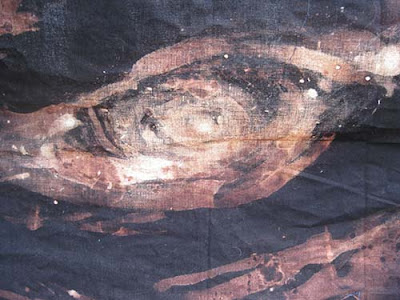 The back is even better, right? Below, the back, from a distance....

Some cool blobs from the front: 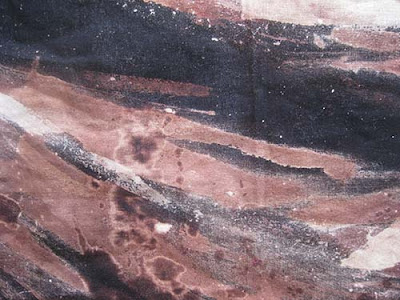 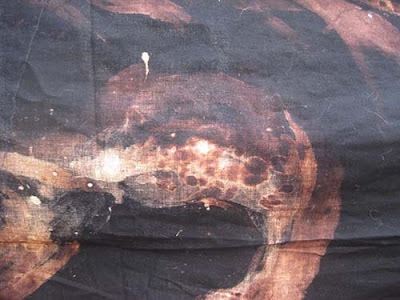 So you can see where discharge has potential for eclipse art! As does paint. Here's a Rosh Hashana postcard I made years ago with rubber stamps and white acrylic paint. 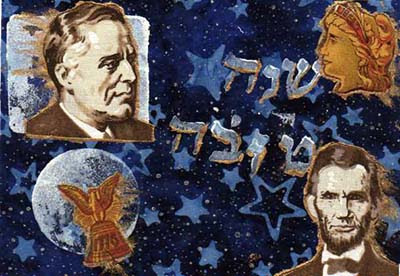 That planet on the lower left? It's stamped with a foam circle in white paint.   Here are a couple more experimental foam circles made with paint for a different postcard (Just don't ask me why I put mah jongg tiles in space. I was young.) 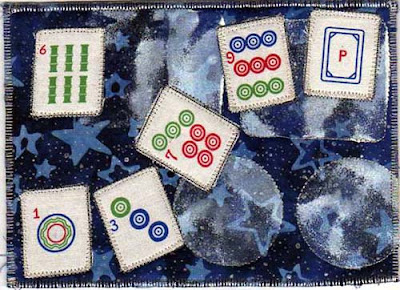 More eclipse art: Oregon State University held a quilt show in honor of the event. The Quilt Show showed off some great images of art made BEFORE the big event, here.

If you need more inspiration for eclipse art, photos collected from private citizens as well as NASA scientists are on Flickr, here. If the photo is taken by a private citizen, you will need their permission to use it. If you want to view (and possibly use) NASA photos only, there's a wealth of images starting on this page. For example, here's a wonderful time lapse image taken for NASA by Aubrey Gemignani:

And below is another NASA image taken over Madras, Oregon. 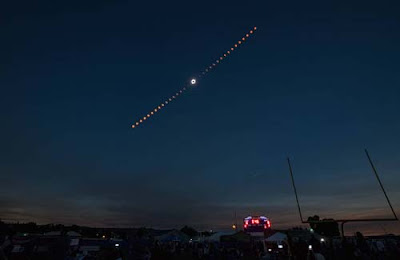 NASA's generous image terms of use are explained here.
Finally, don't throw away your eclipse glasses. Donate them to Astronomers without Borders so needy young people can use them in the future!  Find the information here.
For those of you in Harvey territory: Stay safe.

Posted by Cathy Perlmutter at 11:19 AM