Stuffed fish, high in fiber, yum! Here are a couple of whoppers (11" x 5"), made from blue jeans, though you can use any fabric. They serve as pillows and/or toys. This fun and forgiving method makes two at the same time, stacking and switching pieces. It can also be used to create four applique fish, if you're making an underwater quilt! My pair: Fish 1, 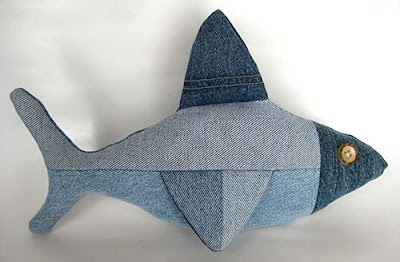 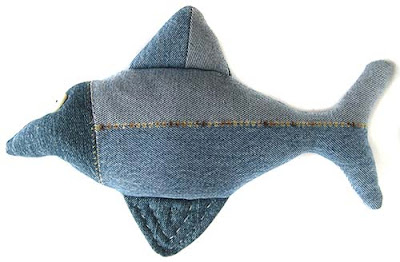 With minimal embellishment, they exude serenity. One has a coconut shell button eye. 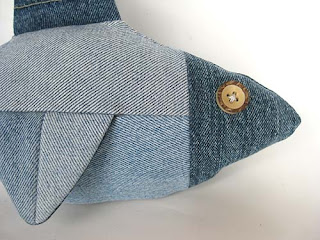 Its partner started out with two vintage mother-of-pearl button eyes, and decorative stitching on the seams. 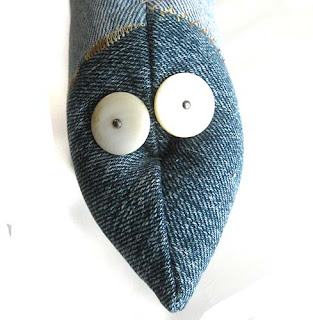 Later, I added buttons and brooches, to turn it into a sensory and memory toy for my elderly aunt. (Details here). 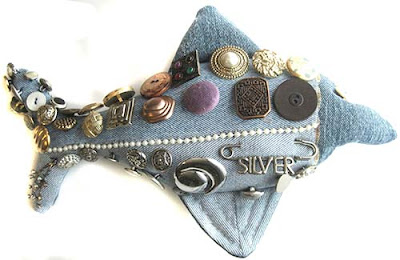 Ready to make your own? You'll need (at least) two pairs of old jeans. Chose two values - one noticeably darker than the other. Turn the jeans inside out.

Draw a fish on a large piece of paper (packing paper, newspaper, anything). My shape started at 15" long by 7" high. (It wound up a few inches smaller, due to the piecing.) Make the body plump, because cutting is going to narrow it.

Turn one of your jeans pairs wrong side out. Smooth one leg,  and put a few pins in the center to hold the two layers together. Place your paper pattern on top and trace all the way around it. (I used an air erasable marker). 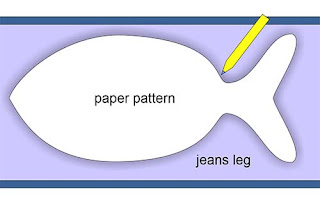 Cut about a half inch out from your drawn line, all the way around. 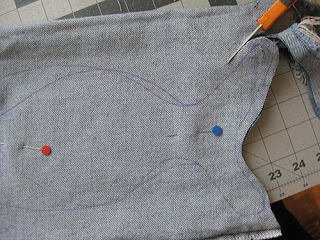 Cut out, it looks something like this.
Use the paper pattern, or one side of the fish, as a pattern to trace and cut two more pieces from the second pair of inside-out jeans. 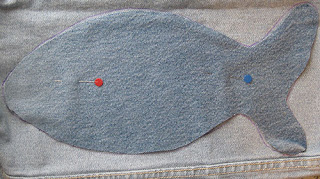 Now you've got two pairs, one lighter and one darker, with wrong sides out. 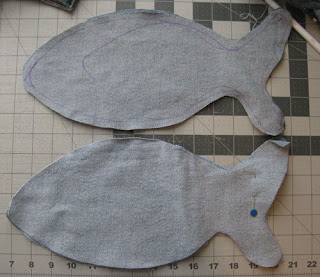 Cut each in half the long way. 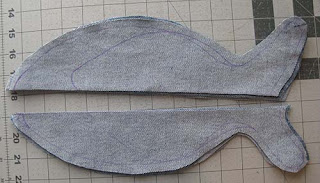 Lay all the pieces right side up, so you can see them. Swap pieces so each side has contrasting pieces. 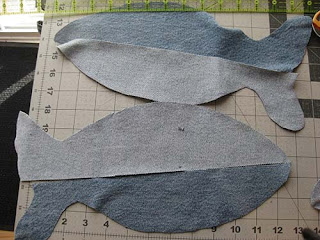 Sew each side together along the horizontal seam. Option: Leave about 3" unstitched in the middle of one seam, if you want to insert a fin in there. Press seam open.

Mark off the heads about 3" from the tip of the snout. (Do fish have snouts?) 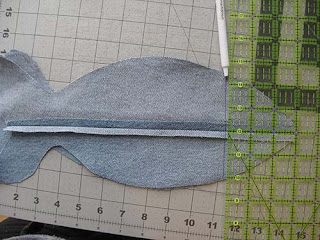 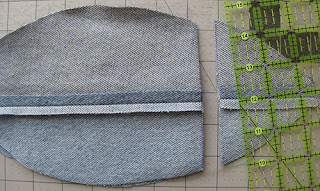 Surprise - we're not going to swap the heads (unless you want to!). We're going to turn them into fins!

But first, borrow one to serve as a pattern for new, single color heads: Place the head on a different shade of denim (consider using different jeans; the reverse side of a pair of jeans; or the back fabric from inside one of the pockets - it's often much darker than the outer fabric.). Trace and cut out. Repeat. 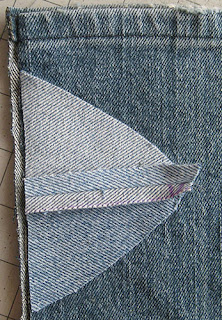 Sew the new heads onto each fish. 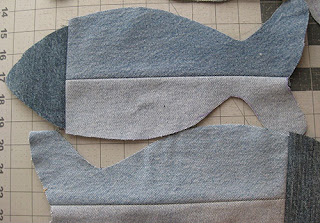 If you won't be adding a fin to the center seam, now is a good time to add decorative stitching.

Below are the four former heads. We could turn them into two fins if we sew them to each other - but to reduce bulk, I sewed each to an unseamed piece of denim. 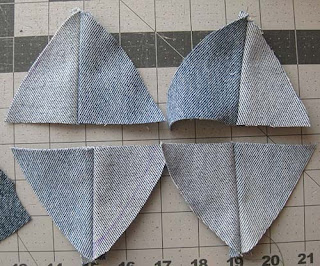 Here you see two of the fins, pinned to denim in a different shade than the fish bodies. (I used the same shade as the head). 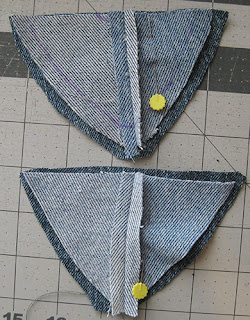 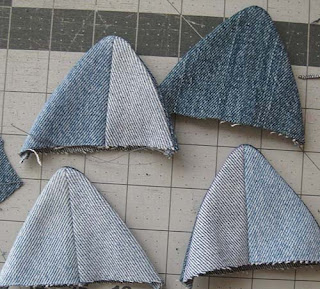 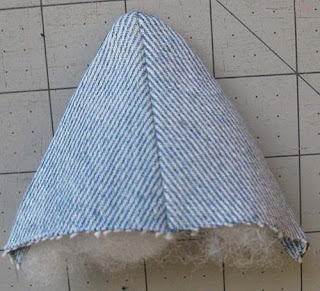 The photo above - that's too much stuffing. I took some out.  A little goes a long way. Option: Quilt the fin, by hand or machine: 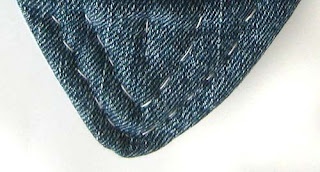 If you left a gap in the central seam, insert the end of a fin in there, and sew in position, closing the gap.

Now place the fins along the top and/or bottom. Pin and/or baste in position. 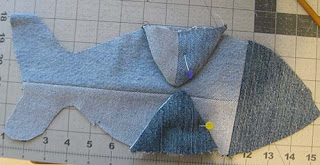 If you want a top fin as well as a central fin, you're going to have to stack them a bit, like this. 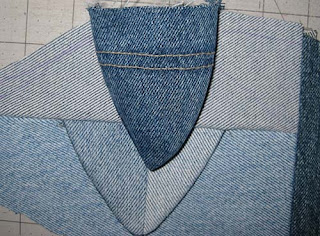 Place another half of the fish on top, right sides together, and pin all the way around. You will probably need to do a little trimming and redrawing of the overall shape to get the sides to line up (because of the piecing.)

Stitch all the way around, 1/2" in, more or less on your drawn line, sealing in the fins. Leave a 2-3" gap. My gap is along the lower left part of the body, before the tail curve starts. Trim seams down to 1/4", except at the gap - leave it longer there. Clip inward curves almost to the seams, especially the curves between the tail and body, and on back of the tail. 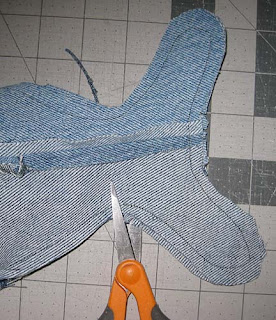 Turn good side out. 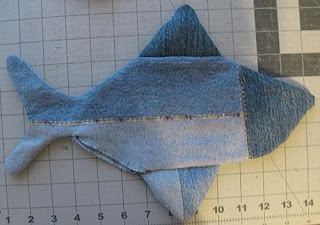 Posted by Cathy Perlmutter at 8:24 AM