(In  Part I, we embarked on a  quilt-making adventure that morphed into an episode of reality TV's 'Say Yes to the Dress.' Here we find more eerie parallels.)

4. Count on the bride's taste being different from  yours. On The Show, the salesperson quickly learns to subsume her or his tastes to the bride's. Similarly, for quilters, taste in fonts. The Hebrew quotation that the couple wanted, from the Song of Songs, means ' This is my lover, this my friend, O daughters of Jerusalem.' I have dozens of Hebrew fonts, many of which came installed with my computer, some of which I bought from a font company (Davka.com). I sent my bride four typeface alternatives, two curvy and traditional #1 and #4), two cleaner, and more linear (#2 and #3). I chose only chunky fonts, with no skinny bits, since I was planning to machine applique each letter. 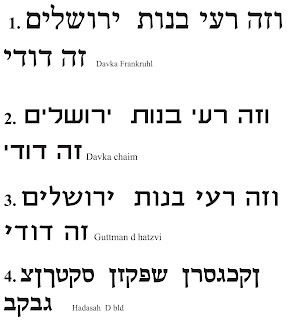 5. Let her wear cowboy boots. Some brides on The Show are quirky. At their weddings, they plan to wear a red petticoat, a turtleneck collar, or in several cases, cowboy boots. The sales associate might raise an eyebrow, but she keeps her mouth shut.

My bride was actually not asking for anything wacky. But I wanted her to, in the sense that I wanted her to be personally invested in this chuppah. She had asked for collaboration, and that’s what I hoped to achieve. She’s an architect, so I asked her if she would be willing to design the central Jerusalem scene. In fact, I hired her to do it - I told her I’d reduce the price if she designed it. Urban landscapes aren’t my forte, and heck, as an architect, I knew she had to be a lot more building-sensitive than me. She accepted the challenge, and did a beautiful job, as I had suspected she would. 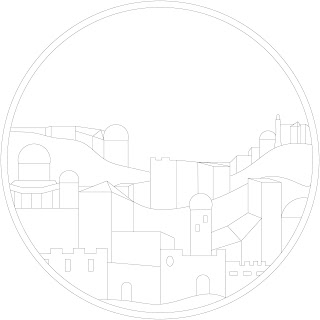 6. Jack things up. On The Show, when the bride likes a dress a lot, but isn’t quite ready to seal the deal, the sales associate will “jack her up” (!) with a jeweled belt, “hair jewelry”(never heard that term before), chandelier earrings, and, of course, a tiara and veil. Everyone is blown away, waterworks ensue, and the dress is sold! Similarly, I decided to jack up the Jerusalem scene. I added a ray of light, with lighter-value fabrics in a swath that goes diagonally across the medallion, to correspond with the ray of light going through two corners of the quilt. It gave the scene a lot more drama. 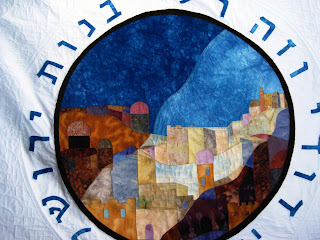 7.  If there are no blood spots and everyone cries (with happiness), you've done your job. This quilt took four months of hard work, and I loved nearly every single minute of it. My bride was a joy - encouraging, helpful, and appreciative at every turn. She was truly a dream client, and I felt honored to work with her.

The only thing I didn’t love was my ever-mounting terror that I might somehow stain the bright white expanses. I became afraid to bring coffee or chocolate into the same room as it – quel sacrifice! While hand-sewing the binding, I actually did poke myself with a pin and shed a drop of blood on it, but managed to wash it out immediately. (And guess what? The same exact thing once happened in The Show, except worse, when the alterations lady poked the poor bride’s ribcage with pins, leaving several bloodspots down the sides of the dress. They got ‘em out, though, regrettably, they didn’t show us how…. did they hold the dress under a bathroom faucet, like I did with the quilt? But I digress.)

When it was done, I took a picture. 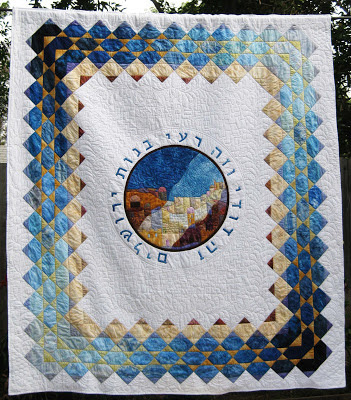 Next, I brought the quilt to the mailing center, and watched with mixed emotions as the clerk carefully packed it up. I wanted to cry. It was like sending a puppy to a shelter. On the upside, I wouldn’t have to worry about drinking coffee or eating dark chocolate in my sewing room, anymore.

When the bride’s family received it, she, her groom, and her family, opened the box together. And, they told me later, they were overjoyed, and tears were shed. In a good  way. I was ecstatic.  I was even happier when they sent me pictures of the chuppah in action, during the wedding ceremony. 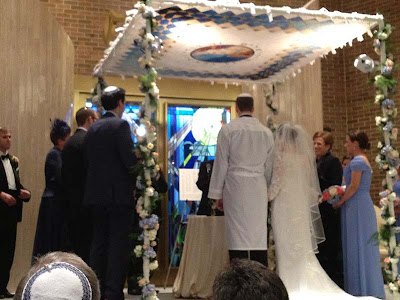 I had had no idea that they'd be standing in front of a stained glass window with similar colors - and, what's really eerie, a ray of light coming from the upper right, just like my chuppah's central design.

Hang on a second! I’m hearing a voice! Who’s talking?

CONFIDENT-AND HAPPY-SOUNDING MALE VOICE:  “When a bride gets the dream wedding quilt that she helped design, the bride, groom, and quiltmaker will all feel fine.”

(For a discussion of the feather quilting on this quilt, go here: http://gefiltequilt.blogspot.com/search/label/feathers.)
Posted by Cathy Perlmutter at 8:42 AM