My #1 secret career fantasy is to be Bruce Springsteen (not to meet him - to BE him), and another one is to be a calligrapher. Unfortunately, I can't sing or play guitar, and my handwriting has always been appalling My glorious calligraphy career began and ended with addressing my wedding invitations.

A sub-secret fantasy, within my calligraphy fantasy, is to be a Torah scribe, someone who sat quietly all day writing out the elegant Hebrew letters on parchment.

So when I first heard of Canadian fiber artist Temma Gentles' international project to cross-stitch out an entire Torah, I got pretty excited and signed up for a portion immediately. (It's here.) That's despite the fact that I haven't done cross stitch since I was about 11.

My excitement waned when I received the kit and realized that, unlike my wedding guest addresses, there was no wiggle room here: The spacing, as well as the lettering, had to be dead accurate. It came with a terrifyingly  blank piece of special cross-stitch cloth which has teeny, tiny squares that I could only count with my handy magnifying glasses.

So I was insanely relieved when Saraj, a cyberfriend from the opposite corner of California volunteered to share the portion with me. She let me send it to her immediately,  and boy, was she good. She laid out all the spacing, PLUS she stitched the first six lines of text PLUS the exquisite twined border. Overall, she did the heavy lifting, putting 40 hours into this sampler, compared to my 20. I simply couldn't have done it without her.

Here's Saraj working on the top: 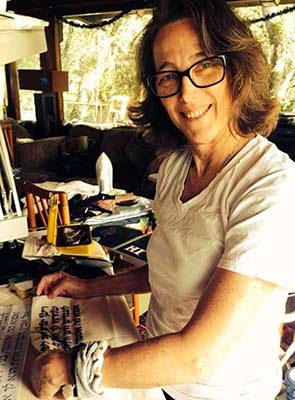 Once she finished her share, she sent it to me, a couple of months ago. So for the past two months, I stitched out the last five lines of text, plus the illustrations along the bottom. Here's the almost finished piece (some of my letters still needed crowns): 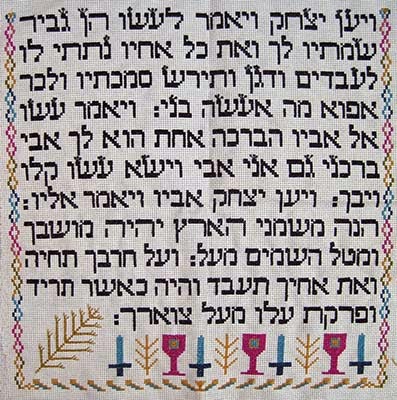 In case your Hebrew has lapsed, it's Genesis 27:37-40, in which Esau begs his father Isaac for a blessing. Isaac at first tells him he's too late, because he's already given his #1 blessing to his Jacob, who will therefore have plenty of wine (thus the pink cups) and grain (the golden wheat/grain) and rule over Esau. But then Isaac decides to bless Esau with the ability to make his living as a hunter (the sword) and eventually rid himself of his brother's yoke. (Find a variety of translations here.) Here is the completely finished piece. 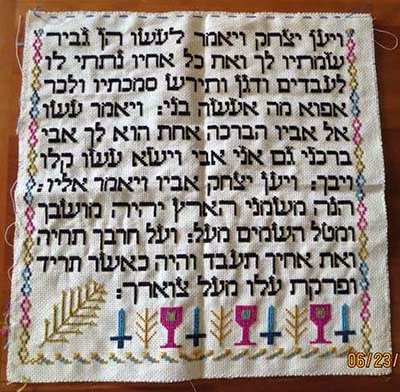 People always think that quilters have a lot of patience, but I don't see my quilting that way - lemme tell you, quilters, CROSS STITCH requires a lot of patience. For example, let's take the following word, from the next to last line, which, like all Hebrew, reads from right to left, (and means "which."). It's about an inch and a quarter long.

The first letter, furthest to the right, is a pretty simple letter, 'kaf', (looks like a backwards C). It probably took me about 7 minutes to stitch. The second and third letters are brutal - first the 'aleph' (second from the right), followed by the 'shin' (third from the right). I'm counting 28 cross-stitches in the aleph, and 36 in the shin. Each took about 15 minutes. The final letter is a simple resh, let's say 5 minutes. So this entire word would have been about 45 minutes.

At first, moving so slowly - along with stitching, there's checking, double-checking, and triple-checking - drove me bonkers.  But as I sank deeper into it, I began to find it almost relaxing! I could almost imagine doing another cross stitch project. Almost. But not for a long time.

Want to see more? Temma's Torah Stitch-by-Stitch project has has enlisted more than 700 stitchers in 13 countries. Check out some of their fabulous illustrations here.

If you're tempted to sign up, just make sure that you're the kind of person who is very diligent and patient - or that you have a stitching partner who is! Thank you, Saraj, and Temma, for making my scribal dreams come true in such a meaningful way!
Posted by Cathy Perlmutter at 11:15 AM