Sewing Therapy: Can This Scrap Project Be Saved?

Warning: This post contains the opposite of eye candy. Eye-liverwurst? Eye-Cheez Whiz?

Like most quilters, I quilt as much for the process as outcome. I have a great time making it, but the results, ugh. C'est la vie. It was still deeply therapeutic. This is especially likely with scrap projects. I hate to say it but sometimes: Garbage in, garbage out.

Lately, I've been playing with silk dupioni, the fabric I hate to love, and vice versa. On the down side, dupioni frays like mad, and some colors run. (Long story here). On the upside, the shine! the texture! the hues! Even the ravellings glow: 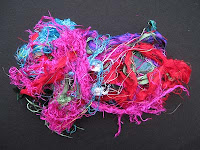 I used dupioni scraps a couple of weeks ago to make a quilted  wedding wallhanging, but I still had plenty of leftovers. So I cut a wonky piece of white muslin and started covering it. It looked terrible, so I cross-hatch freemotion quilted it with Sulky holographic thread (sewing veeeeery slowly so the presser foot didn't catch under the lightly glue-sticked pieces). 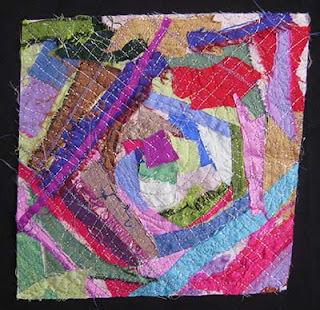 Still bad. The back - well, you can imagine - but I fused on a piece of pink silk to cover my tracks: 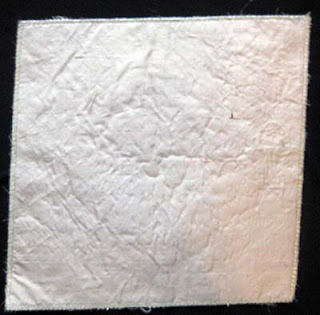 Can this project be rescued? If I folded it, less would show!  It could be a coin purse or a phone case - what about adding a zipper? Speaking of cheez, I experimented with the orange zipper because it was on the top of my zipper drawer. Ouch, my eyes? 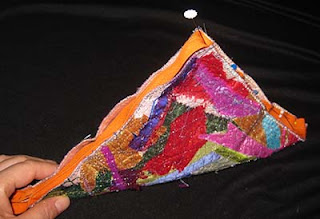 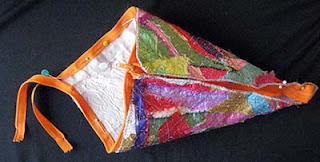 Nope. I dug up a gorgeous book, Silk Unraveled, by Lorna Moffat, who somehow makes ravelly silk scraps magnificent. I decided that one of her many secrets was placing cutouts over the silk scraps:

So I quickly cut an instant snowflake and placed it on top, just to get the idea: 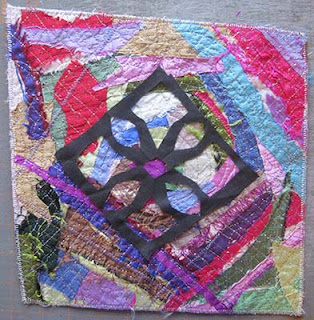 Meh! By coincidence, a new book had just arrived: Exploring Dimensional Quilt Art: Stitch, Fold, Embellish, by C. June Barnes. Ms. Barnes gave me permission to not only stitch, fold and embellish, but also bend, spindle, and mutilate. Inspired, I took little tucks midway along each side, and stitched each one in place with a pair of vintage white buttons, back and front. 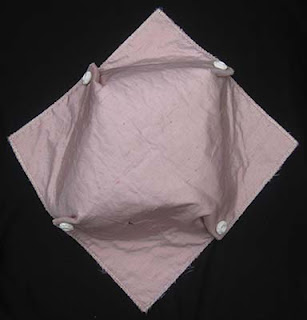 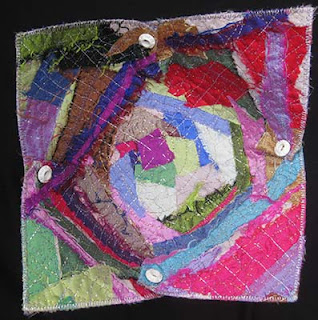 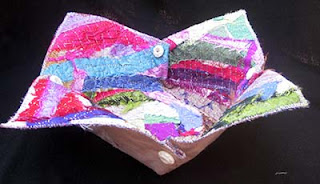 Not great, but better than flat. Then I discovered that you can push the whole thing inside out, putting the scrappy side to the outside. Here's what happens inside: A vast improvement! 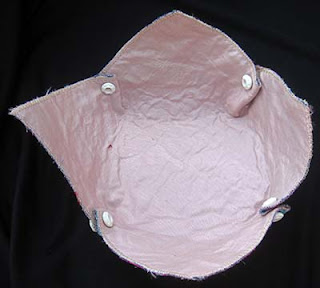 OK, maybe that's a little too plain. I bent the petals in: 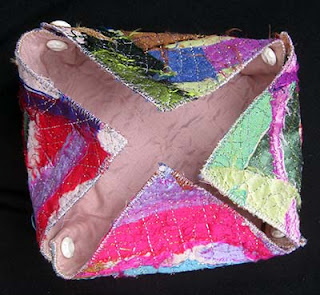 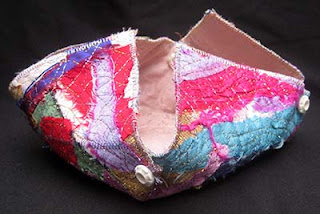 Could be a gift box if I brought the top corners together with a pin, button or snap.
Or, smush the petals downward: 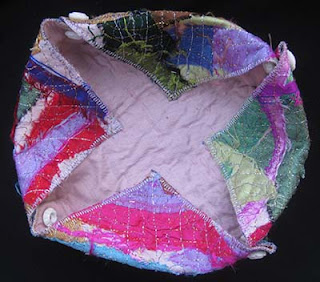 Secure the flaps with buttons (or not): 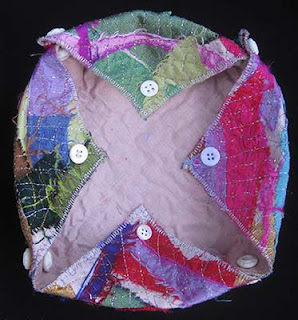 Stitch inchies on top. I happened to have made a bunch of these inchies made with other leftover silk scraps, yarn, and tulle: 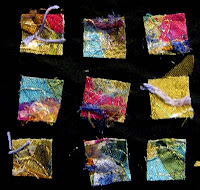 I lay five of them in the middle: 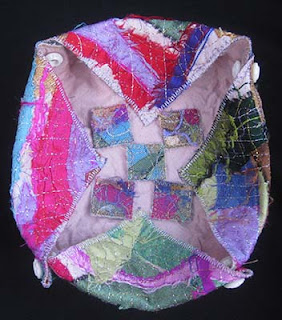 A little better! The awful epicenter of the scrap area is now hidden on the bottom! Below is  my final piece. I stitched the five inchies down with mother-of-pearl buttons, and the flap tips slip under them. Like a visually quirky yet sweet stray pug/bassett hound/coyote mutt, I think it will make the perfect pet for someone who can appreciate its unique appearance more than I do?! 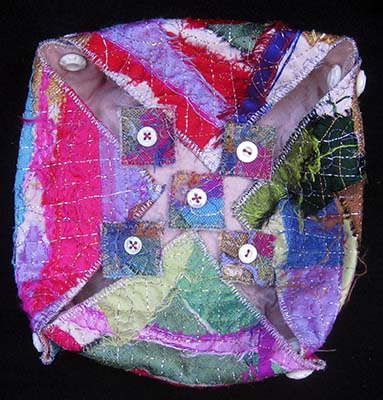 And that, my friends, is how I turned a silk ear into a sow's purse. This idea has great potential and soon you'll see how I played with it more, starting with flat pieces that I like a lot better than the one above. Sneak preview: 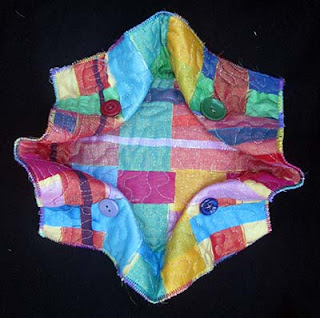 Want to know the basics of stitching down scraps? The results can be gorgeous. Someone just sent me Vicki Smith Hammons' terrific tutorial on making scrappy jewelry from quilter's cottons. Very inspiring! A couple of years ago, I wrote up a tutorial on playing with scrap strips here.
Posted by Cathy Perlmutter at 8:38 AM