I've been playing with denim from jeans, and one of the ideas that jumped into my head was to cut leaves from folded fabric.

For this small batch, I folded the fabric in half and cut the half-stem and -half-leaf, like making Valentine's in 2nd grade, and just as relaxing. Sharp scissors are crucial. Here's the first piece; it's small, at about 11" x 13". 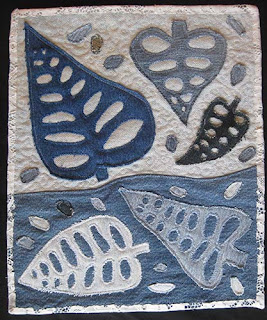 I stitched down the holes with an almost-satin zig-zag stitch. 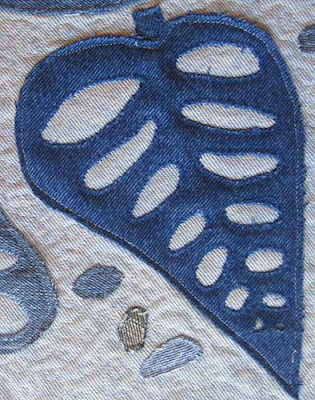 To maintain the "holey" theme, I added lace binding.

Emboldened, I played around with other shapes. I googled "interesting leaves" and made some quick sketches: 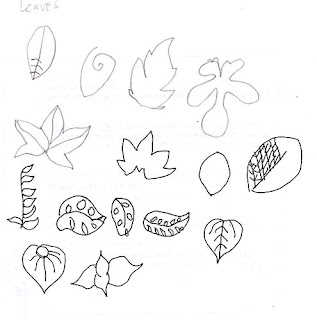 I created a background of raw-edge denim pieces, on top of a batting and backing fabric, then quilted it with a diagonal grid. Mostly ignoring my Google findings, I freehand cut imaginary leaves to fill the squares and rectangles. 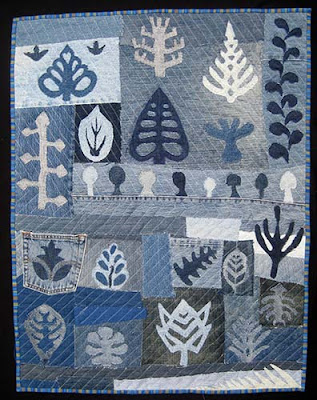 The fantasy plant on the middle right  (below) looks more like a squid than a leaf.

The piece I cut it away from became a reverse squid. 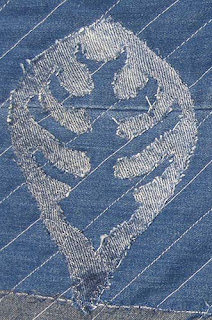 And the vine on the upper right, below, looks like a bunch of apostrophes: 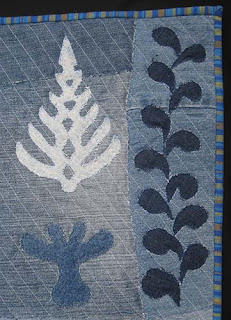 (Apostrophes happen when you've spend too much time trying to freemotion quilt feathers.) Next, a Batmanesque leaf. 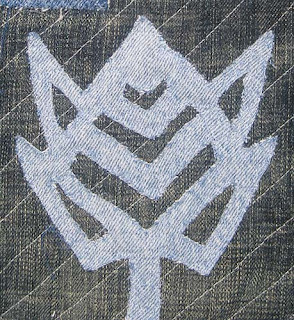 The gold stitching on a jeans pocket shaped the next plant: 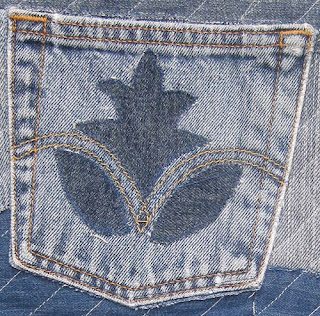 Below, those are supposed to be tiny plants in the upper right and left corners, but they somehow look more like doves. Also suitable for Valentine's Day. 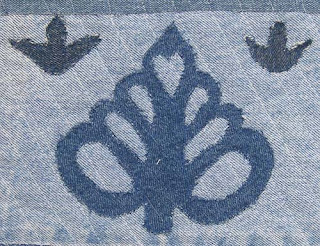 Some of my shapes started out way too complicated. They would have taken forever to stitch down. 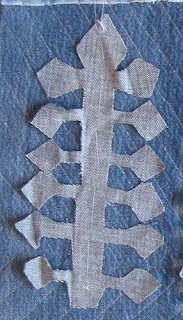 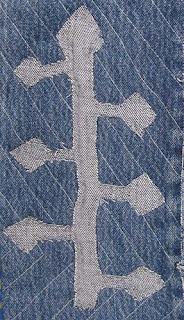 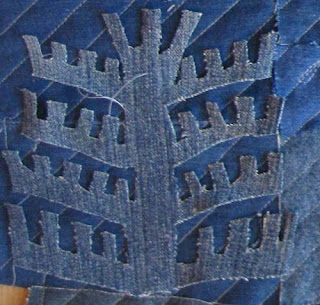 After clipping, I flipped it to its reverse side so it would show against a medium background: 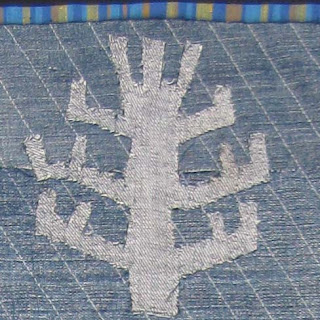 I eventually tired of leaves, so I made a forest.

These could arguably also be called roundish leaves, or human heads, and/or mushrooms.

Once I liked the placement, I glued each plant in position with smears of Elmer's white school glue, a cheap but abundant resource is all the rage in the quilt world these days. (Discussed extensively two weeks ago.)

Once dry, I put a darning foot/aka freemotion quilting foot on my machine, set the machine to a straight stitch, then zoomed back and forth over the edges. all the way around, stitching down with what is effectively a multi-stitch zigzag, but which can be done from any angle. With matching thread, the stitching essentially vanished. But it also contributed to a bit of fraying around the edges. Can you see the light blue thread on the darker blue applique? 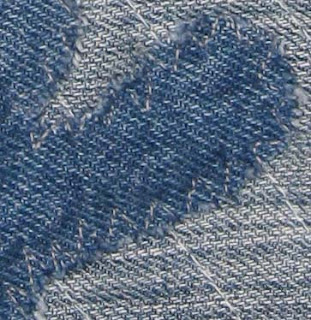 Neatness doesn't count if you use a color that blends. Since making this piece, I have switched over to doing denim applique with a regular zigzag, which causes less fraying than the multi-step variety.

Posted by Cathy Perlmutter at 10:06 AM