Quilts, Etc., Made So Long Ago, I Almost Forgot About Them

I love it when people send unexpectedly me pictures of quilts I gave them. Especially when it's something I made long ago (= more than a month) and pretty much forgot about.

A couple of weeks ago, my cousins in Arizona, sent me a bunch of photos like this: 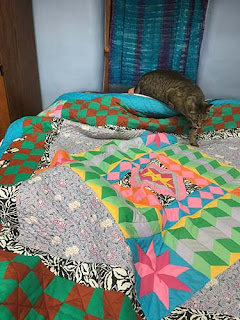 They're time lapse photos of their cat emerging from underneath a quilt. It's one of the first quilts I ever made, more than two decades ago, which I hadn't thought about in a long time. Here it is flat: 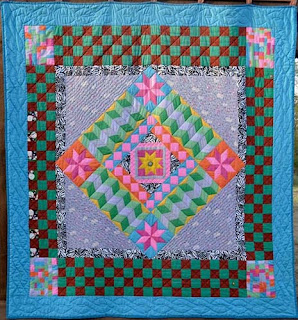 Thank you, I know it looks okay from a distance, but let me assure you I had no flipping idea of what I was doing. Solids and prints were combined with reckless abandon. The pink and lavender fabrics came from the bargain bin, so cheap you could see through them. The black-and-white inner border print was scratchy and therefore likely - horrors! - polyester! I used a classic book on Seminole piecing to create the effective 3-D folded ribbon effect, so I take comfort in that. But the muddy brown and green squares. contrasting with pastel cornerstones, makes me want to weep, and not from happiness.

Poor decisions notwithstanding, the cat photos convinced me that the quilt survived more than two decades of happy marriage and lively pets. The fact that the bargain fabric is intact is a miracle. Maybe the Arizona air mummified it.

And speaking of mummies, a couple of weeks ago, I received two more photos of something wrapped: 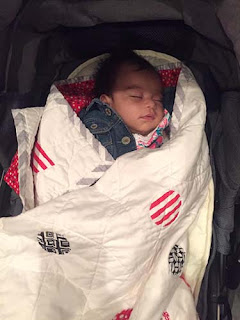 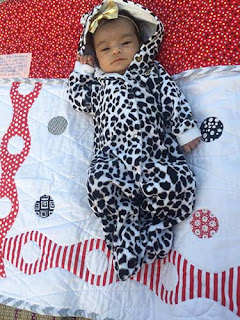 Not a mummy - that's my yummy new grand-niece Skyler, the best dressed baby ever, whose mum is a fabric industry fashionista! I knew this baby would need a stylish quilt, so I sent her the minimalist black-and-red-and-white baby quilt I made using Cheryl Lynch's brilliant Curvalicious ruler (no financial affiliation). 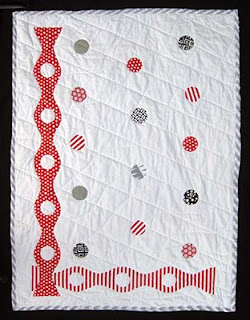 It's so much happier to see it wrapped around a baby! And speaking of wrapping girls, another project I showed while back was an appliqued silk dupioni prayer shawl, a commission for a bat mitzvah, based on a vintage map of Jerusalem. (Tutorial here.) 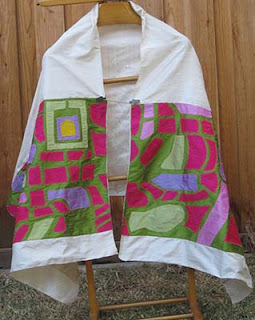 What I couldn't do for this commission was embroider the biblical quotation that the family wanted on the shawl's collar, because I don't own an embroidery machine. They found someone local to embroider it, plus a date along the bottom. 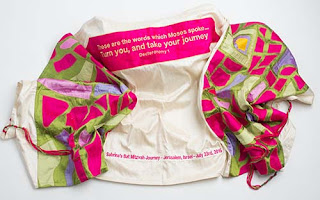 And who wouldn't love getting a picture like this after the happy occasion? 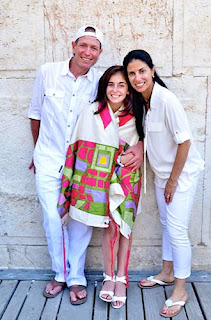 While we're discussing Judaica, here's a challah (bread) cover I designed and started selling as a pattern in 2010. 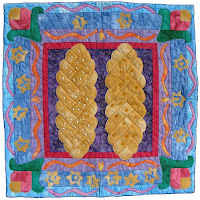 In recent months, two people who bought it (it's in my Etsy shop), sent me images of the covers they made based on it. Jan wrote to me that she is not Jewish, but she made a simplified version for her Jewish daughter-in-law and grandkids. This was her first experience with machine applique, and it went well. 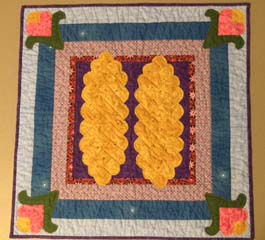 Another correspondent, Orit,  made a more detailed version: 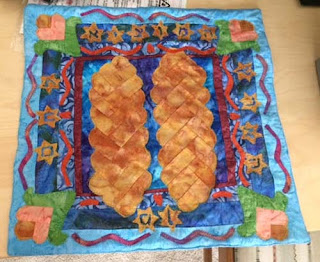 Like all pattern designers, I get a huge kick out of seeing what people do to make them their own!

And moving from Judaica to crosses....many months ago, I sent a picture of my "Blue Cross Blue Shield" all-jeans upcycled quilt to the Studio Art Quilters' Association, as part of their "Cross Purposes" member exhibit. I was beyond thrilled when the photo came back to me in their magazine. 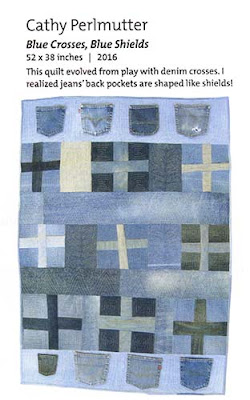 A tutorial for making a quilt like this starts here. (Those are non-denominational crosses.)

Moral of the story: If you're the recipient of a quilt, it's never too late to snap a picture of it and send it to the maker. If you're a quilter, don't be above asking your giftees for pictures of your quilts in action (even if they're just hanging on a wall.) And if you make a quilt from a pattern, the pattern designer would LOVE to see it!
Posted by Cathy Perlmutter at 1:27 PM