On my planet, there are two types of freemotion quilting (FMQ).

The trick with both is to "draw" (stitch) a continuous line with the sewing machine, avoiding thread-cutting and ends-hiding. It often involves stitching accurately and repeatedly over the same lines. All this strengthens the quilt, and lets you finish faster,

Respectable FMQ takes a great deal of practice. Drawing ability helps. It's tasteful, often stupendous, and might win a ribbon at the quilt show.

Awkward freemotion quilting requires no knack for drawing and no practice. A sewing machine is optional. It's a fun way to doodle with a pencil on paper, improves hand-eye coordination and deepens understanding of how to connect FMQ motifs. Done well, you should make yourself laugh.

My latest awkward episode was inspired by the prospect of a new Star Wars movie, coming out in December.  I discovered by accident that if you make 8 loops, you've got Princess Leia's head: 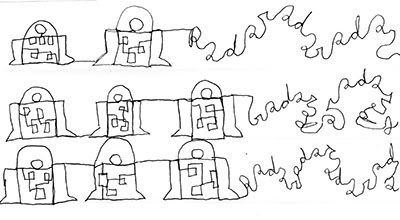 ...but it's even easier to just spell him out in cursive.

Darth Vader is waaayyy  more challenging. As you can see, his helmet was dehydrating and shrinking by the end.

And speaking of hair, I happened to go to the hairdresser last weekend, and made the mistake of asking for curls with my longish trim. For the rest of the day, I looked like a mature person with a 5-year-old Shirley Temple coif.

(Drawing George is like drawing Leia, but the loops pile up vertically.)

And speaking of Presidential hair, on the Democratic side, candidate Bernie' Sanders' hair is a Thing. ("Bernie Hair! Don't Care!" tee shirts here. No financial affiliation) My interpretation:

Glasses are an important vehicle for travelling from one side of a design to the other.

Joe Biden, and most of the Republican candidates, mostly have unobtrusive hair. I was left with Rand Paul...

(His curls remind me of my son as a toddler. Awww!)

...And You-Know-Who. I drew this page while gazing at his hair in a variety of Google images. 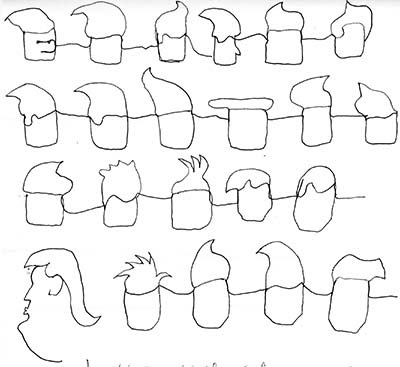 Call this design (a) Donald Trump, (b) Softserve Ice Cream Training Session 1, or (c) Santa Claus, elves, and Bart Simpson flying in the sky. UPDATE: A reader saw Elvis in these figures. That's cool with me.

And speaking of male do's, have you noticed lately the plethora of young men with man-buns and beards?

I've barely scratched the surface of  coiffure-related freemotion quilting possibilities!  Run with it! Send pictures! (But no head lice designs - I must draw the line somewhere.)

PPS Speaking of trivial Presidential issues, my friends just told me that you can #Trumpyourcat! No animals were harmed in the making of this strange new hobby.

PPSS: This just in: President Coolidge was a quilter!

Posted by Cathy Perlmutter at 2:50 PM