In last week's episode, the name of a health insurance company got stuck in my head, so I was compelled to make a quilt out of it. The name, of course, is "Blue Cross, Blue Shield." The tutorial  shows how I pieced the blocks and attached the pockets.

When you last saw it, it wasn't quilted. But now it is: 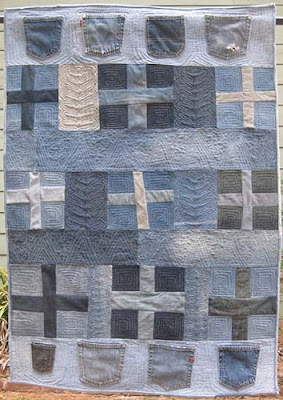 I like the way the white thread comes into and out of view, depending on the shade of denim. Blue and white is so soothing. 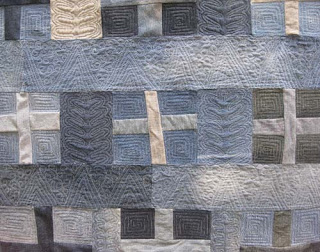 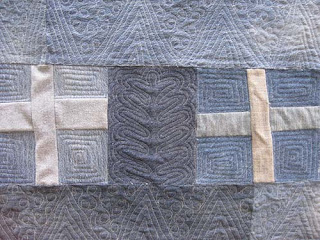 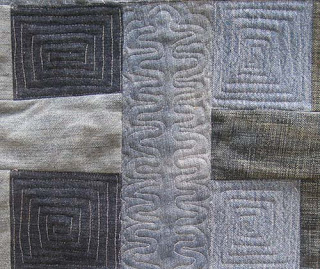 This was a historic quilt for me, because it's the first largish quilt (37" x 57") that I've done on my new baby, ie, my Babylock Tiara III (which, incidentally, is the same as the Handi Quilter Sweet Sixteen). When I  my DH bought it a couple of months ago for my birthday, and the nice people from Kingdom Sewing set it up, it looked like this: 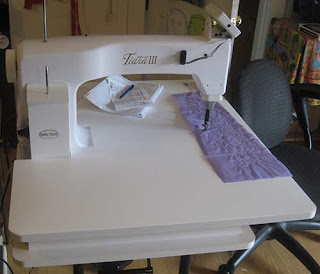 While quilting the Blue Cross quilt, it looked like this: 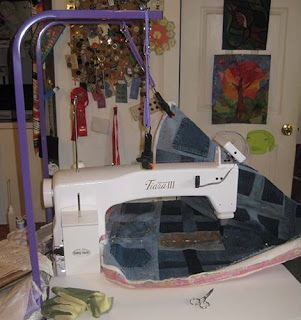 You may be asking: What the (bleep) are those purple poles? Aha! I deduce that you don't show dogs or cats! Neither do I! But those, I learned, are pet grooming arms. I bought them because - one never knows - I might someday adopt a pair of fluffy pets which - one never knows -  I might wish to blow-dry while freemotion quilting!

Just kidding! I added the grooming arms because Katie of Katie's Quilting Corner wrote a persuasive blog post stating that they could be used to reduce the weight of the quilt while freemotion quilting!

In fact, overhead suspenders of some kind are all the rage in the quilt world, I learned from my new Handi Quilter Sweet Sixteen Yahoo discussion group.

I'm pretty sure that quilting legend Caryl Bryer Fallert-Gentry is responsible for this trend - she has a fascinating DIY system hanging from her ceiling - her instructions (in PDF form) are here. More suspension ideas include:
We are not so hardware-handy in our home, so I sprung for the grooming arms (about $36 each). Although I was a skeptical, they worked beautifully. Clipping and unclipping the quilt for major position changes turns out to be MUCH easier than shlepping around the dead weight of a quilt on a table. Suspension also eliminated the need for me to surround my sewing table with vast mesas of similar-height tables.

If you don't have a mid arm like my new baby, you can still benefit from suspension. The systems work equally well with regular (aka 'domestic') sewing machines. If you have a different approach to suspension, I'd love to hear about it. And most importantly, if you use the same brand of dog arms that I did (from Master Aluminum, no financial affiliation), you can choose hot pink instead of purple. Hey, I didn't think of it til just now - I could have bought one in each color!

Back to the quilting details:  I cut the vines out of folded kraft paper, then adjusted them to fit the available spaces.... 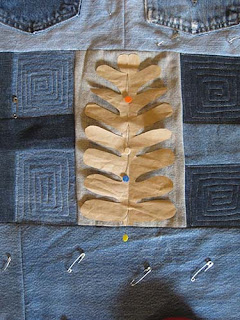 Once pinned in place, just because I'm lazy, I tried freemotion quilting around one - but, of course, the brown paper lifted up when the foot hit it. So I traced around the vine onto three more sheets of freezer paper - then cut out the shape, ironed those into position, and stitched around. 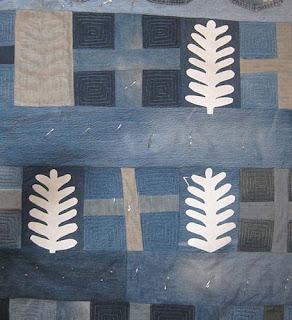 I would have much preferred to mark the quilt, but I have yet to find a marking pencils that shows up on denim. The blue washout pens are virtually invisible on denim, and my half-dozen motley crew of white marking pencils don't make a strong enough line. (Suggestions welcomed!)

For the back, I used a cotton sarong purchased in Thailand in the 1980s. . 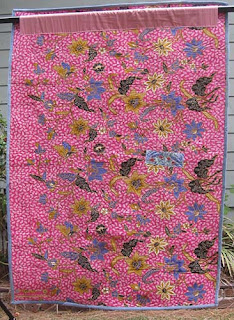 I hated to trim off its lovely selvege, but it was too big for the back. So I  appliquéd a piece with identifying information to a lower corner. Thai is such a beautiful language! (Does anyone know if Emchit is the name of the company?) 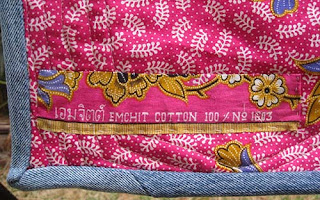 Disregard the sausagey binding. Argh! Doubled denim, I learned, is heavy, thick, and hard like concrete, 2 1/2"  was not wide enough, and the handstiching was a lack of fun. I used strong buttonhole thread, but it may well break over time, given how ferociously it's straining towards freedom. In hindsight I should have bound the quilt with a regular quilters' cotton, or maybe just one layer of denim.

Although I love to kvetch, by the time I finished my quilt, I was counting my blessings. First, that I now have a mid arm - a luxury item for sure. Second, that I found lots of information about suspension systems. I think the suspension  made as much or even more of a difference in ease of quilting than the new machine (at a tiny fraction of the cost of a mid arm.)  And finally, gratitude to whoever invented pet grooming arms. Now all I need a pair of smallish fluffy pets who don't mind being groomed practically on top of a sewing machine.

The piecing and appliqué tutorial for this quilt, in Part I, is here.

UPDATE: My quilting friend Roz in Montreal just told me about a friend who quilts next to a set of bunk beds. When quilting a heavy quilt, she suspends bungee cords from the top bed's coils to hold up the quilt! Gotta love it!


Posted by Cathy Perlmutter at 7:51 AM