Over Japan, Quilts 3 and 4: Definitely My Fave, Maybe

In recent posts, I showed off two large quilts I made from my collection of Japanese textiles. (One, two). Here's the third, which may be my favorite: 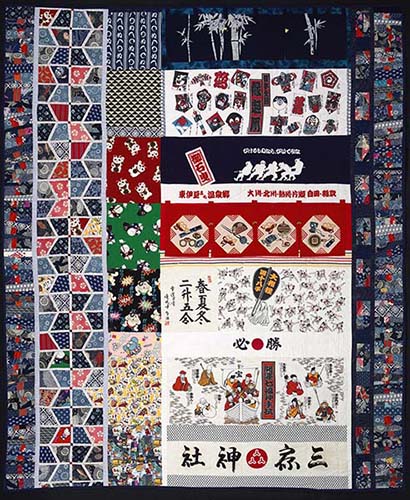 It measures 96" x 75". I pieced the vertical side borders from scraps - I especially like the quarter-hexagon design on the left in the photo above, a closeup of which is on the right side of the photo below. I found this quarter-hexagon concept in a book by the brilliant Sara Nephew: 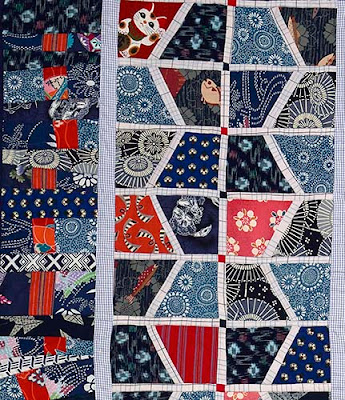 The white sashing above, which looks like graph paper, was from my husband's old shirts. Below is the right border, where I'm fond of the pieced diamonds inside rectangles.

The quilt contains all kinds of Japanese textiles. The red door curtain below has  girly stuff: hair and kimono accessories, and - in the first panel on the left, I'm not sure what the two linked circles are - opera glasses? Handcuffs? I'm pretty sure this piece is Bingata, colorful Okinawan fabric stenciling.

It was purchased in Tokyo in the nineties, as were the next two prints,

The third, the sumo cat fabric directly above was bought in an all-American quilt shop.
A striking group of horizontal textiles on this quilt were purchased by my friend Debbie at a yard sale (in California). They're all made from thin cotton, and appear to be wall banners. I am looking for someone to translate them for me, but my best guess is that this first one depicts gods.... 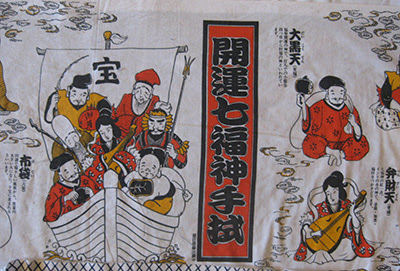 [UPDATE: I found this image online - they are indeed lucky gods. Find the match here.]
The next one is a guide to traditional kites.... 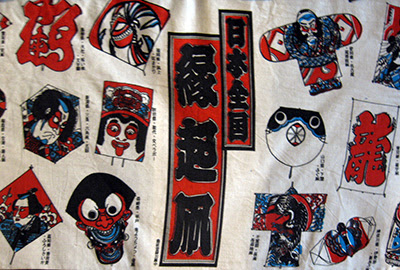 Best of all is this sumo banner.... 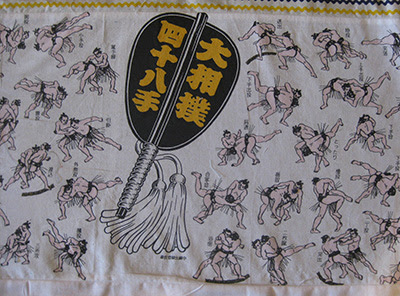 Next, my friend Mika has informed that this banner advertised a late fall festival in Izu that celebrates the history of stone tugging to build the Edo Castle. It says, in part, "Tug it if you can!"

The next strip may be a motivational headband.

And there's this calligraphy wallhanging. (I recognize the numbers, but not much else.) 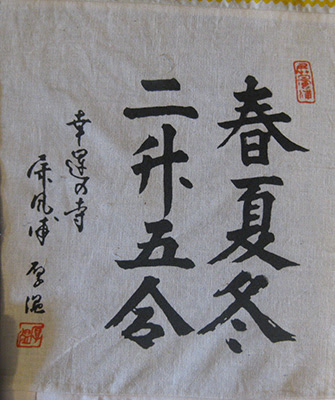 This was a washcloth. 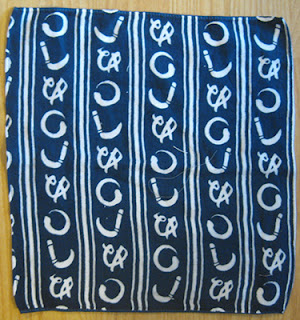 You'd think after making three massive Japanese fabric quilts, my collection would be exhausted. But it wasn't! So I used some of the leftovers to make this 42" x 42" piece. 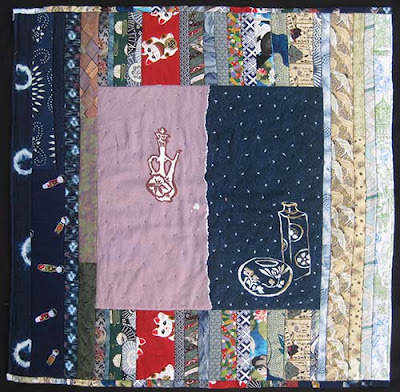 The large two-tone square in the center, (dark blue and light plum) is a furoshiki, a carrying cloth, decorated with beautifully 'sketched' pottery. Scraps are in the borders. And I still have some Japanese fabrics left over!
Posted by Cathy Perlmutter at 1:40 PM