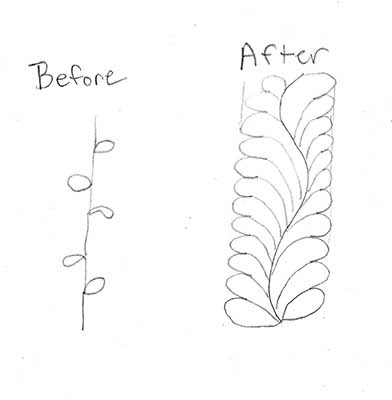 I recently finished a commissioned chuppah, (a wedding canopy). For this project, a medallion quilt surrounded by a large expanse of white,  I envisioned lots of spectacular quilting. And to me, the ultimate in spectacular quilting is feathers. You know, those long vines with leaves coming off them, which nest against each other, and gloriously twist and turn. (Sometimes I call them feathers, sometimes vines, excuse my inconsistency).

I knew this leafy vision would be a challenge: In my many years of quilting, I've made wonky, fun, and weird vines, like on the left side of the drawing above, and the corner of a 2010 scrap quilt below (can you see the uneven vine, diagonally crossing the blue and white squares?). (More of this quilt in an earlier post). 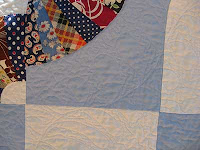 But nothing I sewed looked anything like the lush quilter's feathers I wanted for the formal  chuppah.
Somewhere in my house, there was a 15-year-old magazine with an article about drawing feathers using quarters (25 cent coins, that is, not fat quarters); but I couldn’t find the magazine, plus I wanted feathers  larger than a coin.

I looked through my box of quilting stencils, and found one sad foot-long plastic vine stencil. All feathers were identical and the effect was totally blah.

Fortunately, my quest coincided with a big local quilt show. I hustled from booth to booth, asking the proprietors whether they had a feather stencil, template or book. One offered a unique acrylic template, but when they tried to explain how to angle and trace it, it seemed even trickier than the spare change method! Plus, it  too, could only make feathers in one size.

Finally, in a book booth, I found a new AQS book called Create Your Own Dream Feathers, by Peggy Holt.  (You can peek inside it at the AQS site.)  Along with plentiful illustrations, there are doable  exercises and lots of explanations and arrows to show stitching order. So I bought it. Wow, was that a good move! Living up to its name, it turned out to be the feather method of my dreams.
Freemotion quilting of feathers on a sewing machine (or longarm) is all about muscle memory, hand-eye coordination, and, especially, backtracking. For most designs, the lines must be travelled more than once. I had been stuck in one particular backtracking route, but this book offered several more.


I did the exercises, studied the examples, and before long, I started drawing well-fed feathers...everywhere.  Surrounding to-do lists, in corners of newspapers and magazines, backs of envelopes, restaurant placemats, and any other papers that crossed my path. It's a fun and satisfying way to doodle. (There are also sketching apps for tablets, if you’ve moved beyond pencil and paper in your techno-life! I haven’t.)

Here's how my vines came out on the wedding quilt:  (just above the brown triangle points) 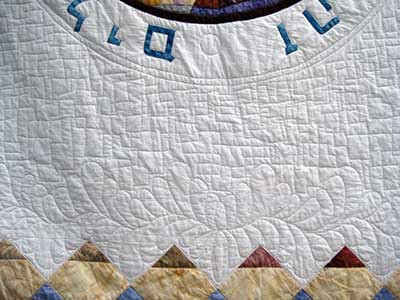 And here's where I improvised some feathery pomegranates on the side edges: 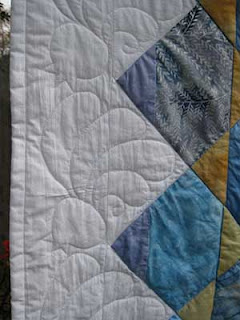 OK, so the pomegranates are a little lopsided, but the feathers are plump and juicy! Bethany Pease's book gave me the inspiration to use a little spiral as the smallest feather.
Like everything in freemotion quilting, doing feathers well is a matter of practice, practice, practice. 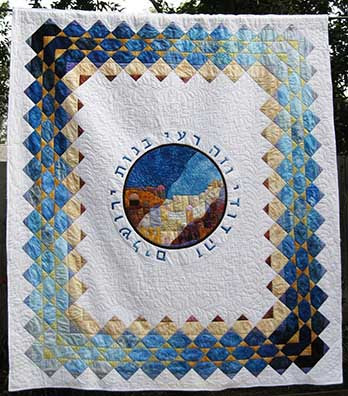 BTW, here's a picture of the overall wedding quilt. You'll be seeing more pictures of it shortly - it was a learning experience in many ways!
Posted by Cathy Perlmutter at 11:48 AM No comments: