Another Week, Another "Everything in the World" Baby Quilt!

I have a theory that Covid and/or the vaccine got a lot of people pregnant - I can hardly keep up with the baby onslaught! The last two posts showed some of my recent baby quilts, and here's the front of my newest: 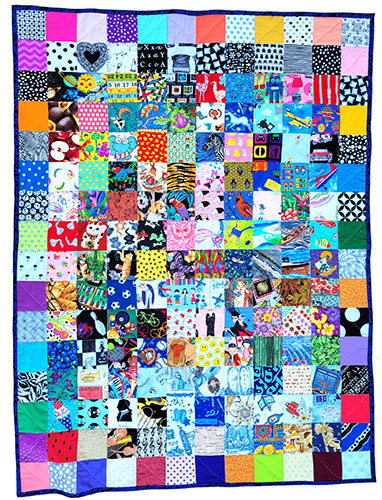 Long before "gender-fluid" was a common phrase, I debated with myself about how girly or (why isn't boyly a word?) to make a baby quilt when the biologial sex was known.
And nowadays, of course, I'm even more conscious of stereotyping. There's a whole lot more girly fabric in the quilt world, than the boyish kind, and I'd like to use it! My solution for this particular quilt - knowing the baby is a biological girl - was to make the front as gender-balanced as I could.
And then I threw a Kaffe Fasset pink party on the back! (Kaffe's a guy, so that balances it out.) 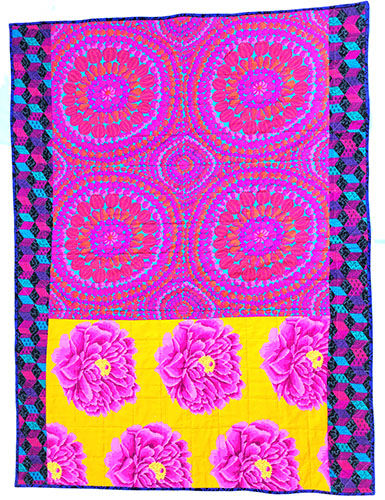 The front is built from 4" blocks, 12 across by 16 high - which adds up to a staggering 192 different fabrics. How do you acquire 192 fabrics? See the end of this post. How do you organize and sew them? I always start by creating thematically-linked 9-patches.

Can you see RGB and Harry Potter? There are also some child Olympians and an Egyptian princess. The nature includes a cactus, pansies, and autumn leaves.

Here's part of two 9-patches with some of my favorite creature fabrics. (I don't happen to own any Mickey Mouse fabric, but I do own Minnie). 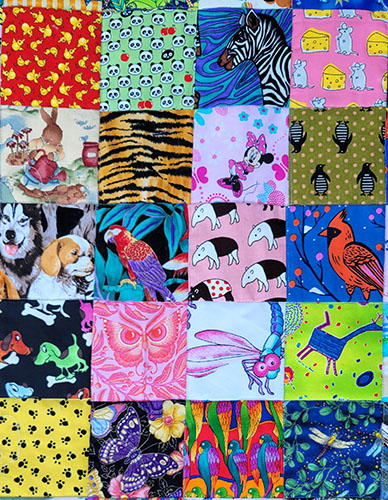 Next, below, a sports-and-games block, plus the 2nd vertical column on the left, which is all food (and not in 9-patch form).  I scored that woman golfer fabric on the upper right 200 years ago, at Michael Levine's in downtown Los Angeles. The bicycle fabric was bought in the last couple of weeks from Remainders in Pasadena CA, a wonderful arts-and-crafts community upcycling shop. The row across the bottom shows part of the music-themed 9-patch. 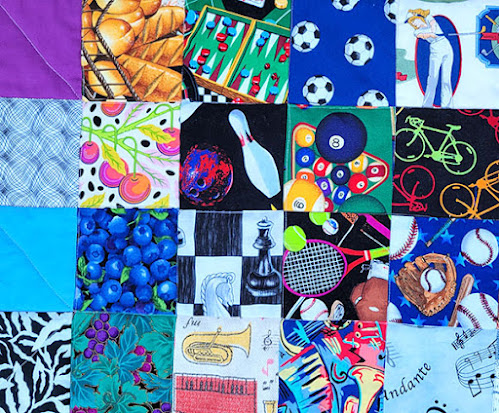 And speaking of games, in the outer rounds, I played completely different games. The second horizontal row across is all black-and-white images. I am on a personal mission to teach babies about typewriters. This one looks like the one my Dad used.
To the right of the typewriter, there are keyboard letters (to help the kid figure it out), and punctuation next to that. On the typewriter's left, there's an alphabet block, and  then hands spelling out sign language letters.

In the outermost border round, mostly solid color blocks alternate with additional black-and-white prints.
If you want to make a quilt like this, with just 4" blocks, it's extremely simple.
1. Spend 30 years as a fabriholic with a driver's license. Ideally some of those years should be pre-1998, before you could order fabric online, when you had to go to every quilt shop you could whenever possible, and buy virtually everything, because you knew you would never see that fabric again.

2. When you're creatively blocked or need a little exercise, cut all your family-friendly fabrics (and solid colors, and black-and-white fabrics) into 4" squares. Let these pile up.

3. When anyone declares a pregnancy, sew your squares together into 9-patches, and then join those into a quilt.

So easy! (Except maybe the time travel!)

First, in case you are as confused as I was, a "Tumbler" quilt is  completely different from a "Tumbling Blocks" quilt!

"Tumbling Blocks" are made from 60 degree triangles and diamonds, and wind up with a 3D effect. They're great fun to look at, but technically can be a bear to make. I don't even remember how I pulled off the blocks below, from a Tokyo-themed quilt I made in the 90s, called "Sushi in the Sky with Diamonds." 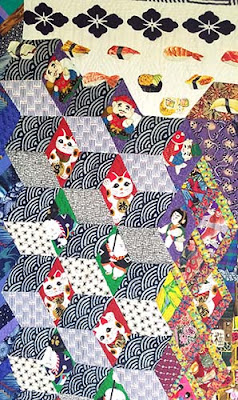 I must have had a much higher tolerance for mitering in those days. On that same quilt, I also threw on some hollow tumbling blocks, carrying little passengers cut from Japanese fabric. 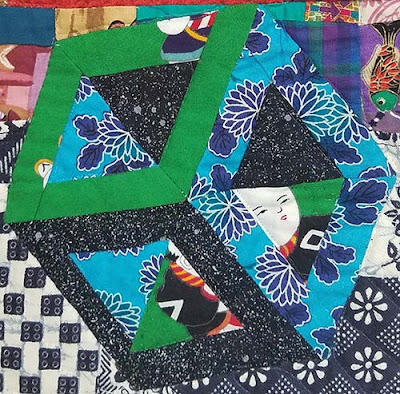 But in three decades of quilting I never made a much easier-looking "Tumbler" quilt, whose patches are shaped like - guess what kind of glassware?

Until now! Here it is. Made as part of my emergency response to the massive baby tsunami happening among my family and friends since the Covid era began. 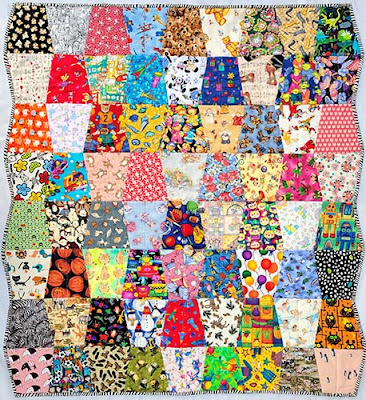 What made this quilt possible was a wonderful craft thrift shop, Remainders, in Pasadena, California, which has every kind of fiber art notion from the past 50 years. Remainders sells them at such reasonable prices that if I don't like it, I just donate it back to them to sell again! It's like a lending library of sewing stuff!

Specifically, I found this: 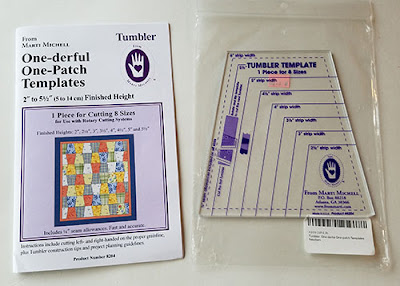 It's Marti Michell's "One-derful One-Patch Templates" They're $23 new at Joanns, but half that price at other retailers (which makes the price only a few dollars more than I paid at Remainders.)

You may ask, "Why would I need to buy a Tumbler template when I can perfectly well cut a tumbler shape out of a Cheerios Box?" And I asked myself the same question. Then I tried it, and my newly-educated answer is, "This template rocks!"

First, it's thick acrylic, so unlike a cereal box, you won't trim it with each piece you cut. Second and more mysteriously compelling: The template has these two little jogs in the lower outer corners, on the wider end. Look closely at that bottom right edge in the photo above - the template is not quite straight there.

When you cut the shape with these slight extra angles, they piece together much more cleanly than if they didn't have the extra angles. If you understand why, please explain it to me!

UPDATE! Several alert readers have explained it to me - Tumblers have strange little dog ears. Reader mary greene (who doesn't capitalize her name) sent me to this tutorial by Nancy Zieman. If you scroll down to the section titled "Construction," the third photo below that subtitle, you see the tiny dog ear on the bottom right that's created if you don't have a shaped template. Because Michell's template has you trim that first, the pieces' alignment is less confusing! By the way, mary has a hilarious blog, where her favorite post is "Two Dog Shirts for 50 Cents," here.

I also found many of the fabrics for this quilt from Remainders,  of course supplemented them with pieces from my own exhaustive, exhausting, library of novelty prints. 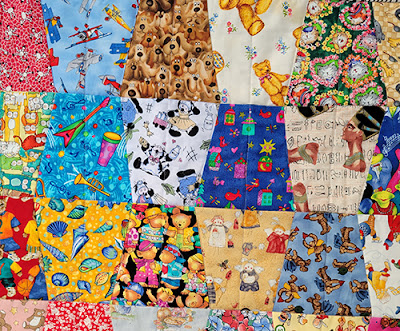 I debated whether to include popcorn (upper left in photo below), since it's a baby choking hazard, but hopefully by the time the baby is old enough to comprehend a picture of popcorn, they will be old enough to safely eat some. Also, the parents could lie and claim they're floating yellow teddy bears. 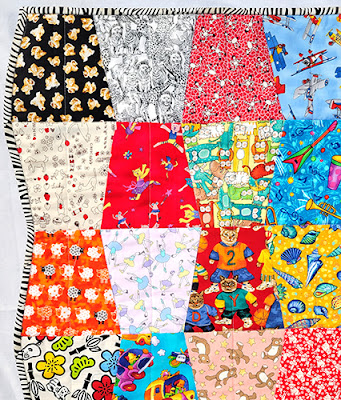 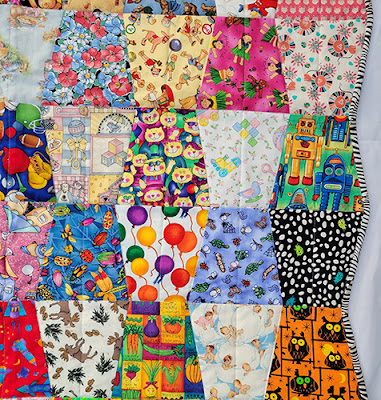 Every baby quilt should include mooses (above left).
Below, the back. I like putting fabrics that I don't have the heart to cut up into small pieces on the back. 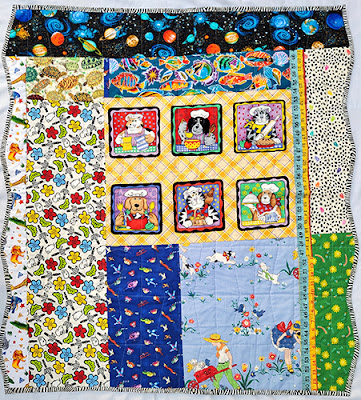 I decided to give the back an astrophysics, fish and pet theme. 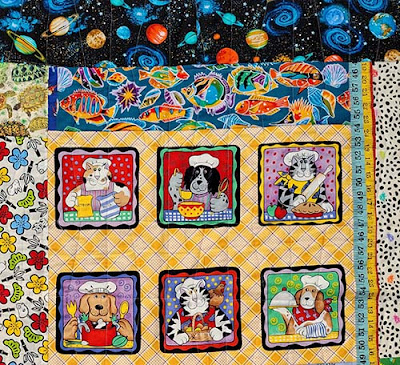 My great debate with myself with this quilt was whether to leave the sides zig-zag, or cut the edges even, thereby losing half of each outer side row. And speaking of pets, my grand-cat assisted me in scrutinizing this important issue closely. 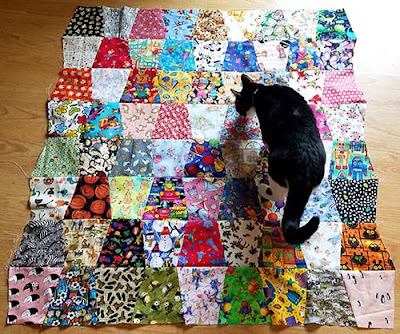 I finally decided to leave the zigzag sides. I cut the binding from bias. At the four corners, I turned the bias the exact same way as for a regular 90 degree corner. And for the gentle ins and outs on the sides, there was no need to take the quilt out of the machine. Just stop on each outermost and innermost point, needle down, and swivel to the next direction, turning the bias along with the rest of the quilt. It's surprisingly easy!

Tumbler quilts do take a little more time than square-based baby quilts - but with a sturdy-yet-mysterious Marti Michell template, they're relatively fast and a lot of fun. (No financial affiliation). I'll hold onto my new favorite template for a while and see what babies come along next!

Posted by Cathy Perlmutter at 11:49 AM 5 comments: