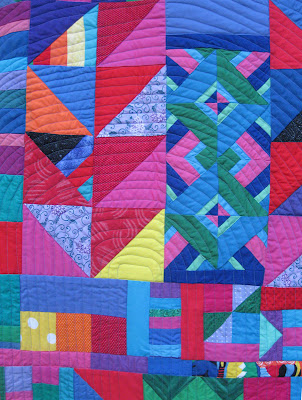 Desperately needing to get out of my house yesterday, and needing some yarn to finish a scarf I'm crocheting, I headed for the nearest Joann's fabric.While there, what the heck, might as well look at the fabric. Their pre-cut area - where they sell packs of coordinated fat quarters and 'jelly rolls' (2 1/2" wide strips) - is near the entrance, so that was the first stop in my shopping therapy.

What I saw there amazed me. Solid fabrics now dominate.

Not so long ago, the vast majority of Joann's pre-cuts were collections of print fabrics. But yesterday, most of the pre-cuts I saw were solids, in gradations, or rainbow colors, or other combinations. Gosh, they even have pre-cut strips that gradate from white through grey, all the way to black (Weird, huh? I'm guessing that's for all the hordes of people making "50 Shades of Grey" quilts?)

This tells me that "modern" quilting is a certifiable, money-making trend. Which is exciting, because just a few years ago the quilt world was collectively anguishing over imminent doom as quilters' average ages rose. Now it's looking like today's young "modern" quilters are saving our pastime/passion. You go, Youth!

Which brings me to a quilt I blogged about a couple of months ago, here. Here's how it looked then. 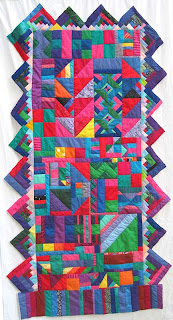 I had pieced it in the early 90s from scraps of the solids that I was mostly using them, when solids were more popular, and there weren't nearly as many interesting prints around.  I was a total beginner, and the piece has many, shall we say quirks.

After piecing it, I stuffed it, just a top, in my cabinet, where it sat for years. Among other things, it was was completely and utterly out of style. (This was also before the renewed interest in improvisational quilting, now very hot).

I thought of it as a sort of magic doorway, with light coming in around the cracks. A few months ago, I decided to finish it. I backed and batted it, and stitched in the ditch. But I thought it needed something more.  I solicited and received many good suggestions. I especially liked the idea of  Israeli quilter Rachelly Roggel, who suggested a series of arches, in keeping with the doorway theme. She'd suggested doing them off-center, but for some reason I went with centering them; now I think off-center would have been a little more interesting. 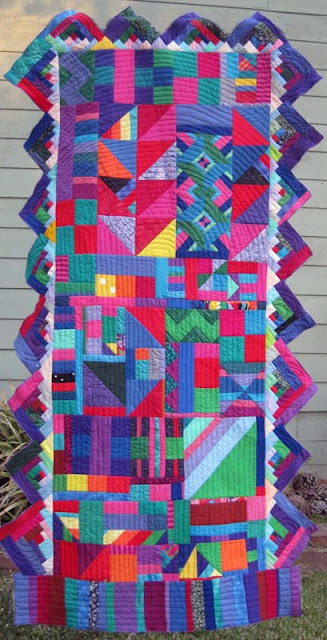 I quilted circles into the blocks around the edges. 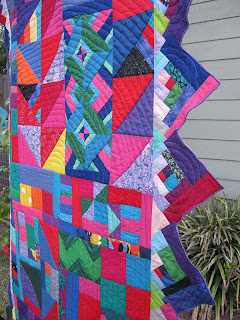 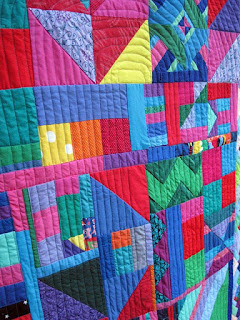 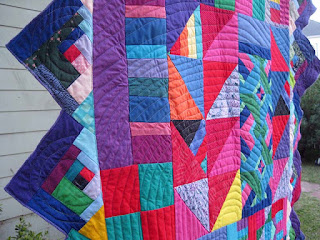 Aside from the occasional beginner's crease, I like it, and I'm still tickled that a quilt I made so long ago is  au courant! I am thinking about whether I should sew a zillion colorful buttons to it, or leave well enough alone. Other than that, my biggest challenge is to clear some wall space to hang it!

Meanwhile, I broke my tripod (which is why these photos are a bit fuzzy). Can anyone recommend a strong, durable, but not outrageously expensive tripod?

Posted by Cathy Perlmutter at 9:56 AM