Craft Wars and Challenges: Even When You Lose Some, it's Winsome

Competitions and challenges can be a great way to exercise your creative muscles. They're also an opportunity to enhance your humility, because what are the chances that you'll actually win a prize? But if/when you lose, how sad will you be?

These questions came to mind during the recent Quiltwoman end cap competition. in which, as it turned out, the odds were 8-to-1 in my favor. Yet I still managed to lose - their winning entry was so good that even I voted for it. (You'll see it soon). But I did have a wonderful time creating.

It all started a couple of months ago when Quiltwoman.com, a pattern publishing and distribution company, put out a call for people to brainstorm what they should do with their mountain of plastic 'end caps': 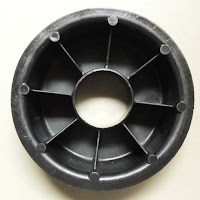 Each end cap is about 4" across and 1" high. I gather they come from rolls of printer paper. The winner of the creative challenge would get their design turned into a Quiltwoman pattern.

Although I'm primarily a quilter, I'm also secretly a mixed-media wannabe. That's why I can't even throw away empty thread spools. So this contest called my name. I wrote away for an end cap, and assumed hordes of other people were doing likewise. Let the wild rumpus begin!

I did add few rules of my own to the challenge. In the spirit of recycling, I didn't buy anything new for these projects. (Not a huge sacrifice, considering that I have a store's worth of craft supplies in my home.) And I refused to paint the end cap. Too messy and potentially environmentally incorrect. Thus, as you'll see, I relied on color schemes that involve a lot of black.

I started off using an X-acto knife to cut green floral foam to the size of the little compartments; stuffed it in and inserted short blossoms into the foam pieces. I circled the outside with a polka dot ribbon. 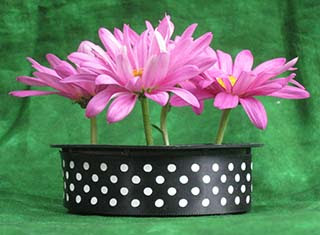 Those are real flowers. With the compartments watered, the blossoms actually  lasted for days! 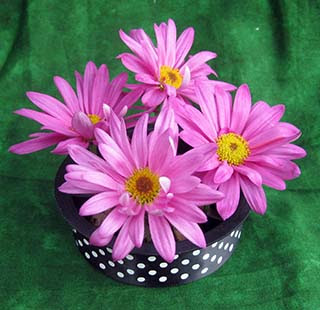 Next, with the same color palette - black and white and pink all over - I made a paper clip desk caddy. 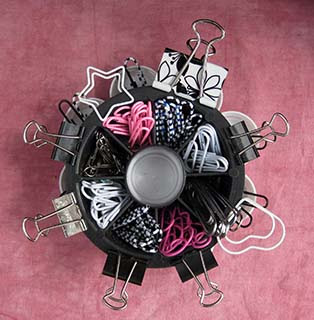 See the heart-shaped and star-shaped ones clipped to the top edge, in the photo above? Paper clips these days are practically jewelry. I rested the end cap on a round of milk carton caps. That brought me to the most obvious quilt-related use for the end cap: as a pincushion. I did a color wheel pincushion, with a grey "modern" touch. It serves as a color theory reminder. I cut circles of fabric in each color, stuffed polyester stuffing inside, and smushed them down into each compartment. 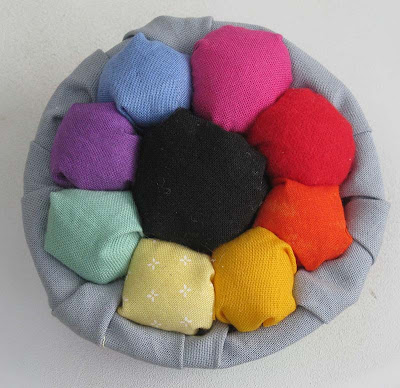 Then it occurred to me that it could also serve as a needle organizer. So I made little banners with needle categories written on them.  I think this is how it my end cap might end up forever, because I actually need one of these! 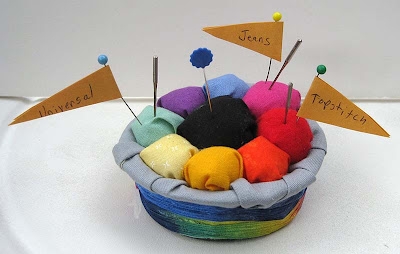 Something I don't need is a fascinator. But I have a good friend who is obsessed with them. A fascinator is a British inedible confection that aristocrats place upon their heads at jaunty angles for weddings and, uh, maybe fancy horseraces? Ascot? Astor? Astoria? Isn't that in Queens? Whatever. Thus emerged Fascinator #1: 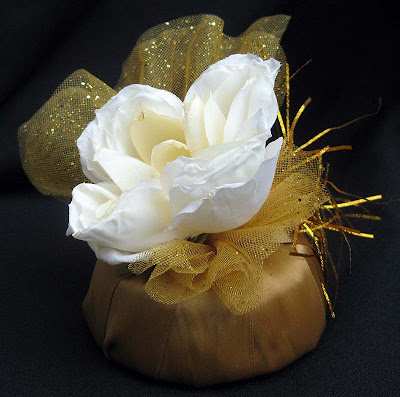 The end cap is wrapped in a wide satin gold ribbon, with a pouf of sparkly tulle and tinsel and a lush artificial rose. A clear plastic comb would be wired onto the bottom: 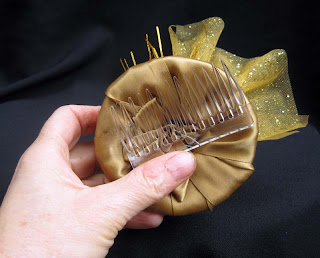 I would never actually wear it, but my daughter's American Girl doll did not protest: 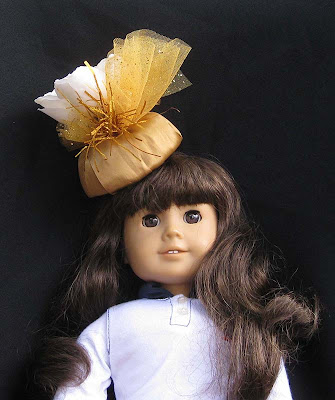 Trying to think British, I remembered that I had some well-worn vintage artificial birds. Thus, Fascinator #2: 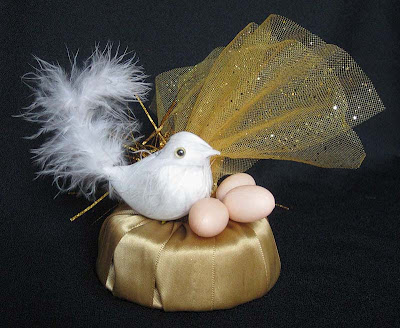 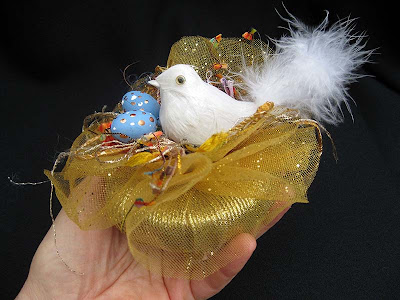 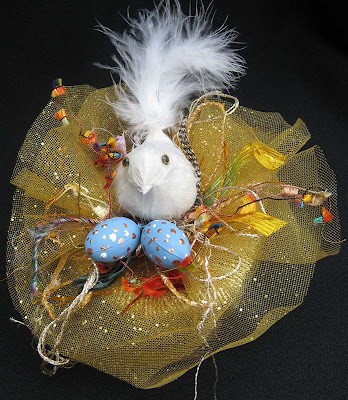 Hey, wait a second - turn it over and the end cap will be more like a nest! And the compartments could serve as faux eggs! So I stuffed the compartments just as I had in the modern pincushion above, this time using different blue fabrics reminiscent of eggshells.  The outer structure of the nest is green floral wire that I crocheted into a nest shape, with yarn scraps woven throughout. 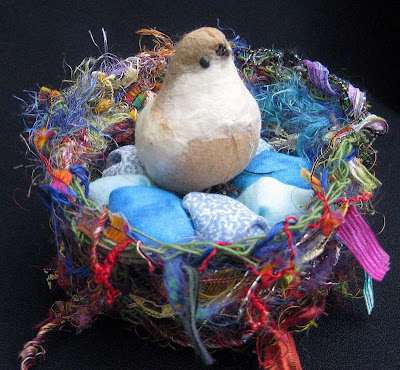 That tough old bird has one eye and no tail; I had to photograph it just so. This thing isn't a fascinator; it's a paperweight and/or alternative pincushion/needle sorter.

The concept of holding stuff turned into an idea for a Tower o'Sewing Stuff. The levels are made of empty plastic thread spools, alternating with large plastic jar lids and the end cap. The base is a black jar lid (wrapped with ribbon). There's a thread spool in the center, wrapped with wide red grosgrain ribbon. The cupcakes are plastic milk carton lids, wrapped with rick-rack or ribbon. They're stuffed with poly batting and silver lame, and those are red round glass beads held on with flower-headed pins. They serve as mini-pincushions.

In the next picture, the red tier at the bottom is a peanut butter jar lid, encircled by rick-rack; it has thimbles and buttons resting on it. 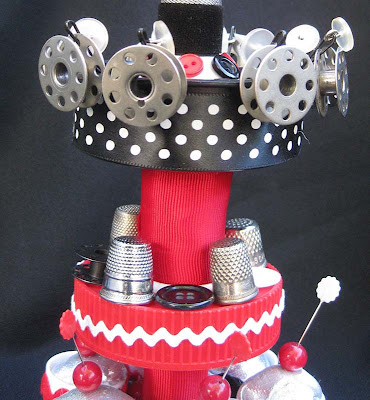 On the top tier, leaning out of each compartment is a bobby pin that has a vintage white shank button with a metal center, and a Featherweight bobbin.

Emerging from the top spool is a pouf made from circles of recycled produce bags (from Trader Joe's ginger and oranges, I believe), plus a circle of white tulle. Shooting up from the center are white and silver wires holding a needle threader (far left) and red, clear, black and white buttons. 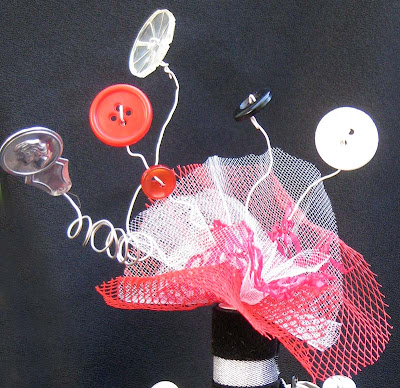 I imagine this as a centerpiece for a quilter's party. Quilters attending this imaginary party could, at the end, divide up and take most of the tower items as little gifts.

And that's it! Boy, did I have a good time! By the time the contest was over, I was calling that end cap My Precious and wearing it around my neck, slogging toward Mordor.

Quiltwoman showed each entry on their Facebook page, without naming the makers. The first one they showed was the ultimate winner. As soon as I saw it, I knew I was out. Here it is.  Over several days, the rest of the entries were shown, one by one. They were all mine. All of them! And then it ended! Could it be that only two people entered?

When the winner was announced, I was very happy for her - her project was beautiful, practical and  professional -  but also a little sorry for myself. There was no runner-up announcement. No medal for "Most Frivolous," a category the fascinators would surely have swept, or "Most Winsome," which should have gone to my poignant, one-eyed, tattered birds, or even just for "Most."

But I really had a terrific time doing it. I hated for that contest to end. So by now, you are saying to yourself about challenges like this one:


a. A contest like the that sounds great! I should try it! Or,
b. That kind of competition sounds too stressful for me. Or,
c. Both a and b. Or,
d. Get a life, lady!

If you answered a. or c., and you're a fan of fiber or mixed media arts, there are so many different kinds of challenges out there that you can join online. The vast Quiltart listserv is a terrific way to hear about challenges. (See their old challenges here.) Quilting Arts magazine challenges are here. Cloth, Paper, Scissors magazine has a challenge announcement page here. If you're interested in getting published in a magazine, here's another page to explore.

And last week, I received an email about a duct tape design competition. Oh joy! I'm thinking a one-eyed bird might look snappy in a duct tape tuxedo....

Posted by Cathy Perlmutter at 9:46 AM