My previous post showed 18 striking things at QuiltCon 2016, which was only a fraction of what I photographed. Here are a dozen more Modern quilts from the show, followed by more vendor goodies.

1. "Aerodynamics," by fabric designer Heather Givans, quilted by the legendary Karen McTavish (who I was thrilled to see walking around at the show!) Heather's label says it was "paper-pieced in an improvisational way," which to me, is an oxymoron. 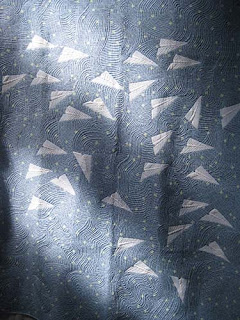 (That is sunlight streaking across the quilt, sorry about that.) 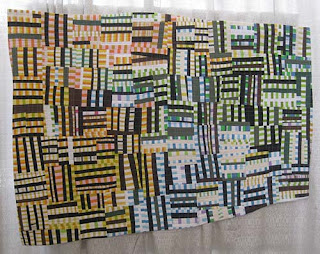 The picture above is taken straight on. The quilt struck a chord with me because this is what usually happens when I try to make a square quilt! But I suspect Andrew made it wonky on purpose.

3. Rebecca Burnett's pixellated "Every Little Hungry Schoolgirl's Pride and Joy," based on a photograph. (My picture is taken from an angle; this quilt is a regular rectangle.) Those circles are appliquéd. The label states that the person in the photo is a celebrity named George. An informed reader told me this is George Michael, and the title is one of his songs. Thank you, Tara! 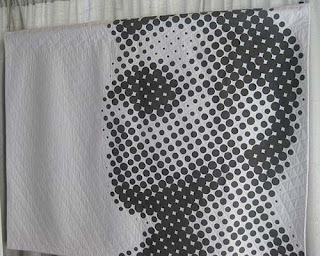 4. Rebecca also made the next quilt, "Horseshoes and Hand Grenades," based on a design by graphic designer Tilman: 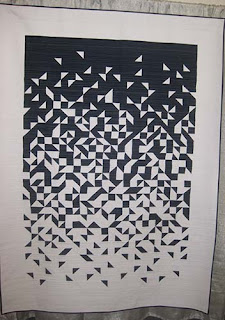 5 & 6. Two more pieces by quilt world rock star Gwen Marston. Seeing her in person at QuiltCon was a huge thrill for me, as confessed in my last post. 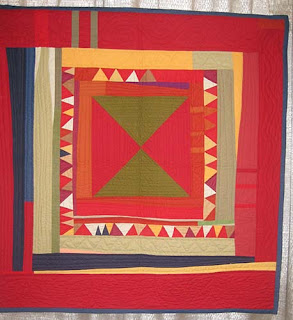 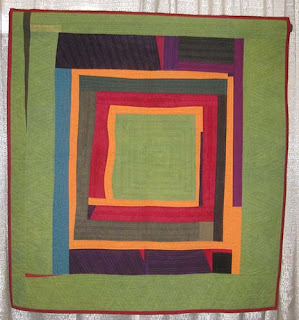 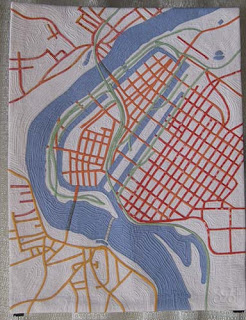 8. "Don't Look Back," by Hillary Goodwin of Auburn, California. "It was improv pieced out of linen and Ikea canvas, and the binding is made from a repurposed suede skirt." 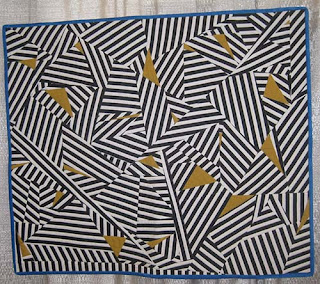 9. "Group Self Portrait" by Gina Pina of Austin Texas. Gina invited studio visitors to draw self-portraits on fabric with permanent markers. She stitched together the results: 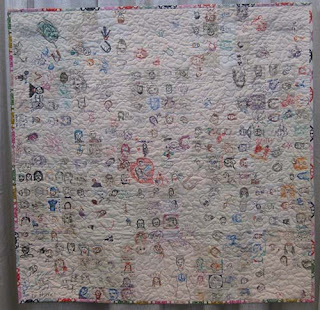 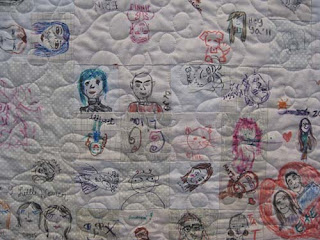 10. "Enthusiasm," by Rossie Hutchinson of Ann Arbor, Michigan. Constructed improvisationally in one sitting! 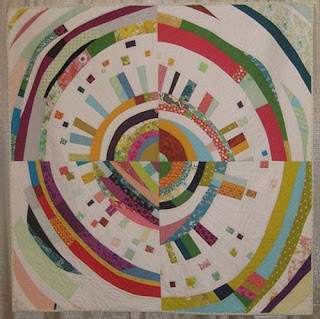 11. Burgundy is my least favorite color, but then Pantone renamed it Marsala and declared it  'color of the year.' And then quilter Kristyn McCoy of Ontario, Canada, put just a little bit of it into a roomy setting.... 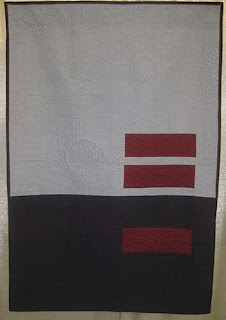 ...and surrounded it with fantastic freemotion quilting.... 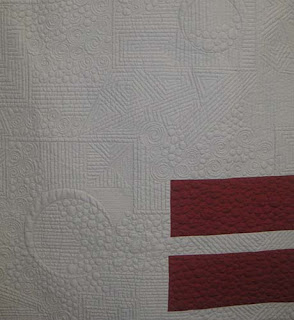 ...which made me think maybe I could learn to like the color?! Or not. (Or only if another fabric company renames it "merlot," "cabernet sauvignon." and/or "Cherry Garcia.")

12. "Better Together" by Laura West Kong of Loma Linda CA is a pixellated, improvisational celebration of diversity. 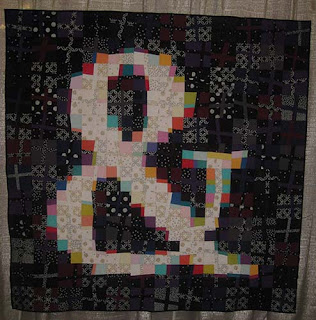 More from the Vendors
14. A mermaid dress! There were no wearables in the juried show, or even in the vendors' booths, but in the Michael Miller booth, we found this "Into the Deep" display dress made by Alyssa Halub. 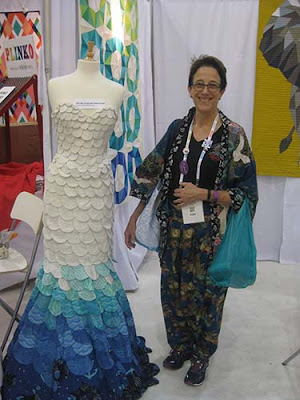 Along with 3D scales, it has a boned corset, and is made from a fabric collection by Patty Sloniger, here. (Just as awesome: On the right, my friend Saraj was wearing a Japanese fabric jacket  and pants that she'd stitched herself!)

15. Batiks. You don't go to a Modern quilt show to look at batik quilts (I didn't see any), but fortunately that prejudice was not evident in the vendor booths. I bought the following spectacular fabric strips from  SewBatiks. (My first-ever precut strip packet! Up to now, I've been faking them.)

Plus a yard of this rainbow fabric from the same booth. It is my deeply-held belief that everybody should keep polka-dotted rainbow batiks around the house in case of emergencies (but don't throw them on kitchen fires).;.. 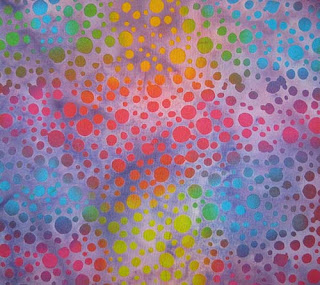 16. Speaking of dots: Saraj gifted me with this insanely great, Japanese fabric by Yuwa. Each of those dots is 2" across. 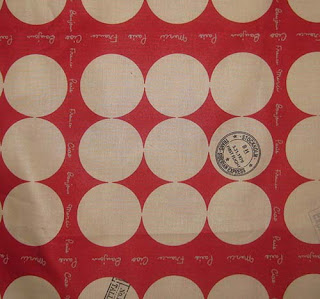 17. Last week I showed off this yard of awesome octopus fabric: 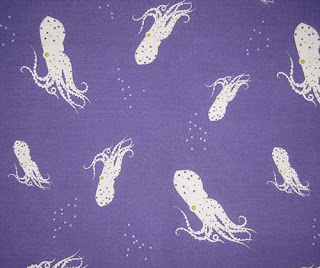 (Squid? Octopus?) This fabric does have the most gigantic selvage I've ever seen (except on fake selvage fabric.) The white area is about 1.5" high.

I was worried that there might not be enough non-selvage to make this one-yard purse  But there was enough!  The purse is hot off my sewing machine, finished yesterday: 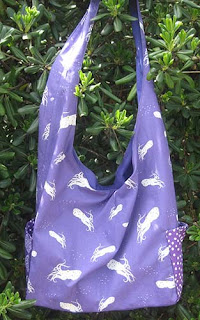 One of the side pockets is a pseudo-Celtic knot print from my stash: 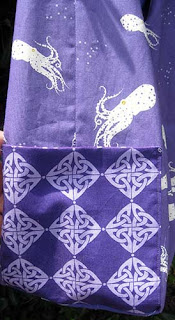 18. Here's the Japanese octopus fabric that got away from me - I didn't buy it, but seriously thought about it,,,, 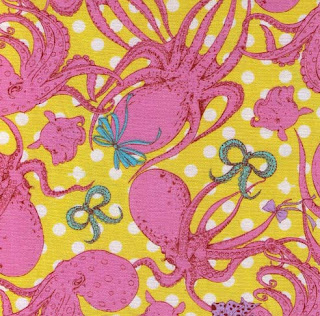 It's called "Lolita Octopus," - oy! - and Lolita and her ilk were sold by a vendor called Bunny's Designs LLC, from Austin Texas, which specializes in dangerously adorable Japanese prints. Many of the wares in their QuiltCon booth are also available in their online Etsy store, here. Hide your credit card before clicking.

19. My Dad was a writer who, before begrudgingly entering the computer era, typed everything on a huge black metal Royal typewriter. So I had to buy this yard, from Windham Fabrics. (I think this print has been around for a long time.) 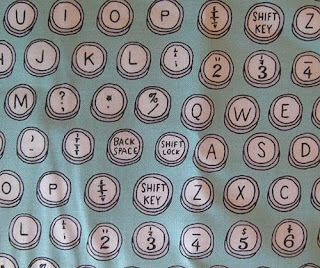 20. Finally, I walked by a booth that had an assortment of Star Wars fat-quarters for a couple of bucks each. How could I not pick up a FQ of illuminated Star Wars polka dots?  I'm thinking tote bag, or potholder, or even a yarmulke? 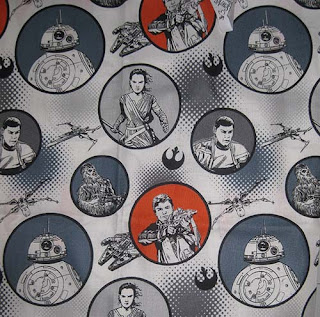 So much to look at! So much to try not to buy! It was stimulation overload! I'm still recovering from QuiltCon 2016!

Posted by Cathy Perlmutter at 6:56 AM