100 Backwards Scraps on the Wall

Hot off the spools! Looks complicated, but it's really a simple 100-square scrap project. Plus, 100 tiny random embellishments. It measures 10" x 10". 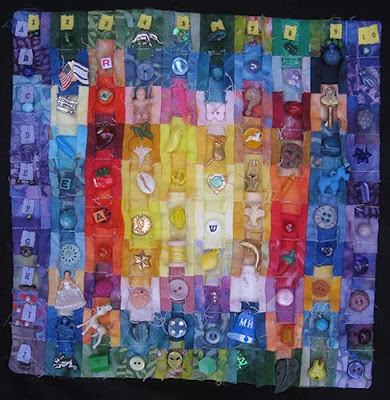 It all started a couple of months ago, when Machine Quilting Unlimited magazine (MQU), announced that, in honor of its tenth birthday, it was holding a 10" x 10"  challenge. Cleverly doing the math, I came up with 100, so I cut about 100 1.5" squares from batiks. (A 1.5" square will finish at 1" when stitched.) 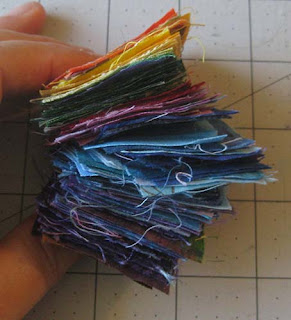 Next, sorted them by hue (blue, green, red, orange, pink, yellow). Then I sorted those from lightest to darkest. Made a circle on a large piece of  posterboard. 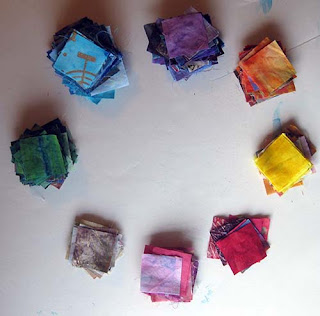 Next, I dealt out the pieces, starting from the center, 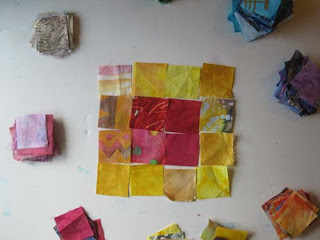 ...until I had a 10 square x 10 square grid.  Below is the first arrangement. These aren't stitched  in this photo, just laid down. Disable the ceiling fan! Don't let the cats in! 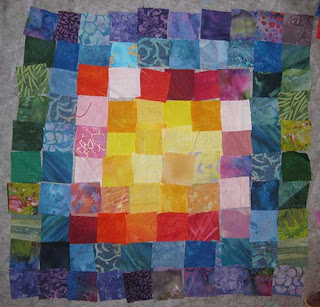 Little did I know that this activity would quickly turn into an obsession, resulting in cutting thousands  of squares, sorting, then laying out color runs up and down the value scale,  to create what I shall call "art quilt color studies" [aka "incredibly basic quilts that even your 5 year old could make."]

I was guided mostly by instinct and the mathematical intuition that the colors I have the most of (blues, purples, greens), should go in the outer rings, while those colors that I have the least (yellows and reds, in my case) of should go in the middle. Luckily, that worked out well aesthetically.

Brought this to the sewing machine and speed-stitched the grid together, first stitching down the vertical seams, at which point it looked like this. 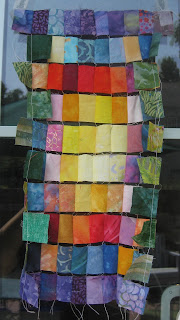 Then the horizontal seams. Here it is all stitched together. 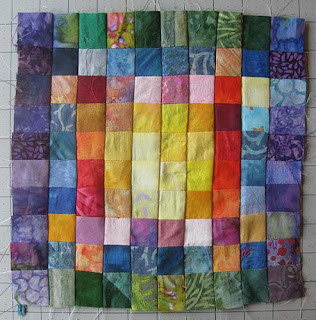 That was okay, but I soon found myself fascinated by the back. By now I was working on a few other similar pieces. I initially pressed all the seams in the same direction, as mandated by the quilt police.   (This is a different one.) 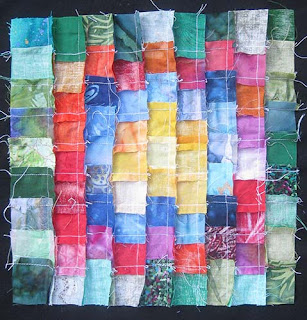 From the front, the seam allowances facing in the same direction made huge ridges that seem more visible on tiny squares.  So just for the heck of it, I tried snipping the threads between squares, then pressing the seams open, something I rarely do because it's a pain in the neck. 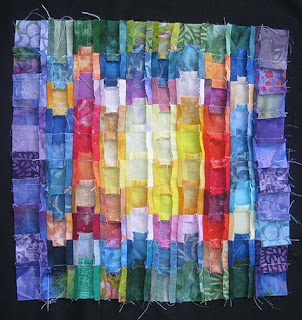 Whoa! Now THAT was cool! Suddenly, cute little cubbies appeared - each color square moves to the background, topped by vertical flaps on either side, and horizontal flaps on top and bottom.
Just like my kids' cubbies in preschool, calling out to be filled with clean underwear, these little boxes cried out for something...beads...buttons.....the works!

What's more, the neatly-aligned squares on the front become zig-zags on the back, due to the flipping of seams, giving the whole piece a sort of unfocused Monet waterlily look! How did I miss that all these years?

I fell so deeply in love with the back-with-vertical-seams-pressed-open that I decided to make it the permanent front. I added batting and backing and did a pillowcase turn, with the back of the top facing forward. (The horizontal seams stay flipped.)

I wanted to fill the cubbies immediately,  but embellishment would require hand-sewing, and this challenge was - remember? - for a magazine with "machine quilting" in the title. So I held off.

Furthermore, the challenge rules said the number ten had to appear on it somewhere. I rubber stamped the numbers 1-10 and letters A-J on little bits of fabric and stitched them in position. 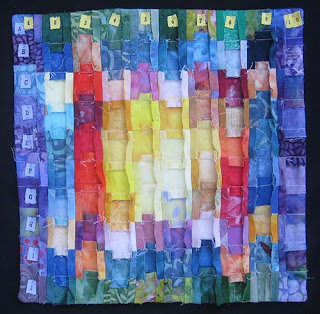 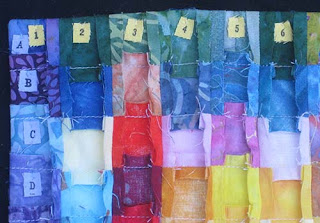 And that's what I submitted to MQU. In my heart, I knew it wasn't finished, and MQU must have sensed it, it too. As soon as the magazine announced the winners (not moi), I will admit to a pang of wounded pride, but that was immediately outweighed by excitement! Now I could fill those cubbies!  I ran for my junk embellishment boxes and strong beading thread, and went to town. 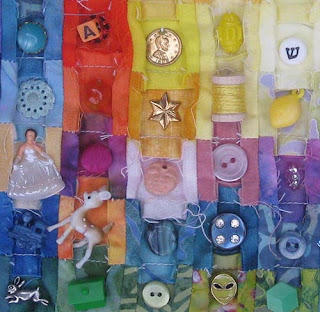 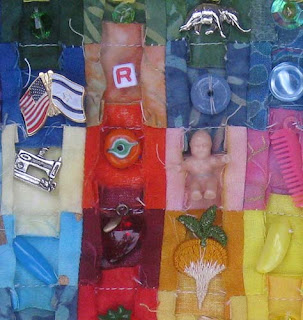 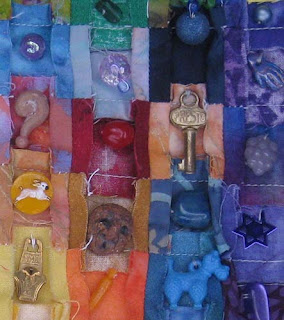 I picked things that more-or-less blended with their background color, to give the eyes extra exercise. When it was done, I had 100 things stitched to a backwards quilt that was only 10" x 10". And I had a fabulous time doing it.

Plus, if anyone wants to locate something on the quilt, I could simply say to them, "The leaping rabbit golden glass button is located in Square C-7!"  and "The Hebrew letter shin is in F-6!" It's like finding Waldo, but on a (nonlinear) grid!

I wasn't done with arranging squares into mini-quilts and other items, not by a long shot. Nor was I done with backwards. Something even bigger and stranger was still to come. (Update: Read the sequel here.)

Posted by Cathy Perlmutter at 9:26 AM