Look, Up in the Sky! Eclipse? Fruit Cocktail?

For the NASA eclipse art challenge, discussed in my last two posts (1,2) I planned to do something serious and dignified, in keeping with cosmic awe, science, wonder and all that. Inspired by austere NASA photography, it would probably involve discharge (chemically removing dye) from black fabric, which creates this kind of a mood... 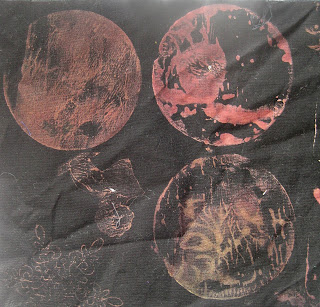 ...(from a years-old stamping-discharge experiment stuffed into my stash), except less wrinkly.

But a funny thing happened on the way to austere dignity, and I wound up making this: 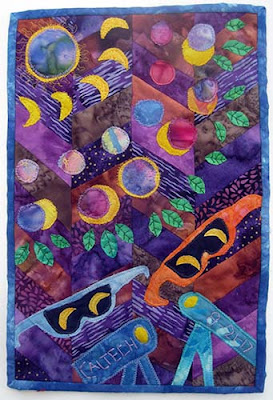 It all started when I started to create the patchwork background, inspired by my friend Anne's photos of the eclipse reflected through tree leaves on tiled Atlanta sidewalks, which I showed last week. 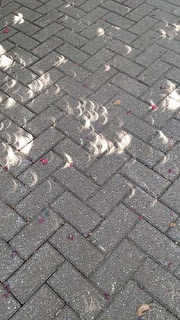 I figured I would discharge the moon shapes onto a pieced sidewalk. But blacks and greys seemed too dull. Instead, I cut shadowy brown and purple batiks into 1 1/2" strips. I also cut strips of used packing paper to 2 1/2" x about 15". (Never throw away packing paper - it's also great for drafting freemotion quilting designs). Pieced the fabric strips on the paper at an angle - half had the strips going from upper left to lower right, and the other half with the strips going the other way. In process, it looks like this:

Cut off the tails. 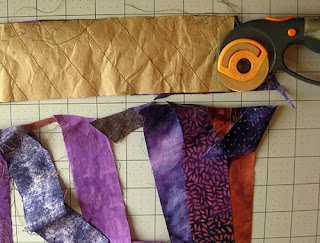 I wound up making five. 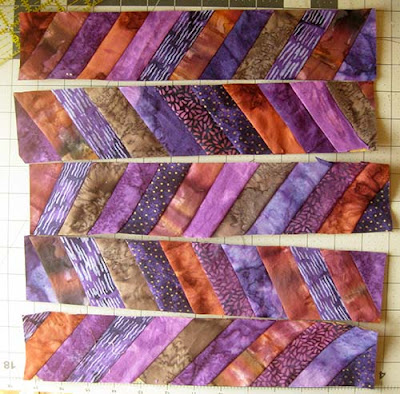 Stitched the rows together. (I wanted it rectangular, like a sidewalk, so I only used four). 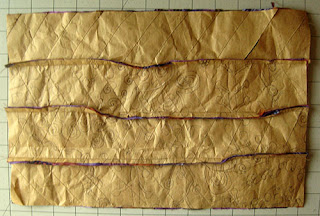 Then tore out the paper. The background was done. 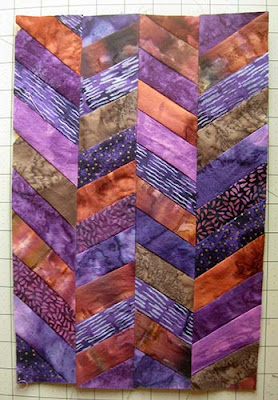 Time to bring in the moody moons.  That would require rummaging through my craft supply closet to locate my jar of preferred discharge agent, Decoulerant. (no financial affiliation). But I happened to be at my cutting board, where there were some batting scraps. Just for fun, I cut some crescents and strewed them on. 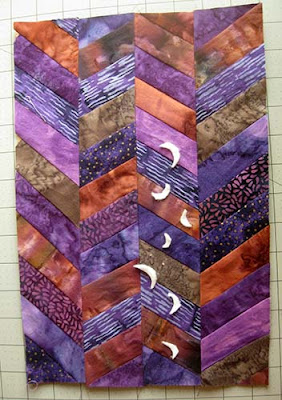 Below is the next photograph in my camera. I'm not sure what happened between these two photos. Maybe I blacked out. Or maybe there was another eclipse. When I awoke, I'd done this: 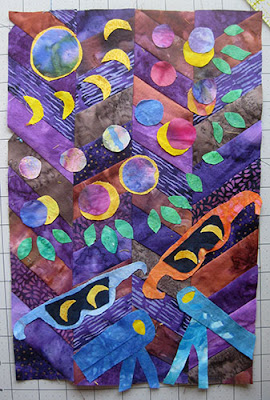 OK, I didn't black out, there was some logic that got me pulling colorful scraps from my batik scrap bag and raucously cutting them into moons, planets, telescopes, eyewear, sidewalk leaves, etc.

I viewed the eclipse from the Caltech campus in Pasadena, CA, where my husband works. It didn't get very dark, so, at least as impressive as the teeny waxing and waning crescent in the sky was how it drew people together, joyfully grooving on the vibe. In 1967, when I was 10, I went with my parents to a Be-In in Central Park. The eclipse was like the Be In, but without the cannabis, protest, or big hair. People were getting high on astronomy.

So, dang the cosmos, I let myself quilt a colorful celebration.

After looking at what I'd made for about ten seconds, I was a little bummed to realize that my crescent suns look just like bananas. 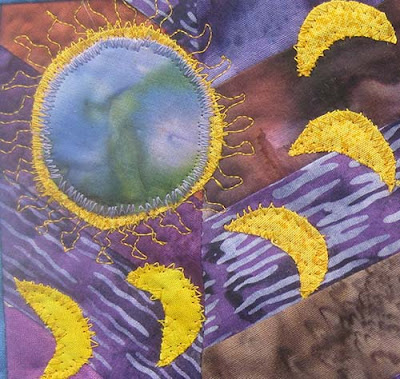 I can't think of a cure for that. (Ideas welcomed.)

On further reflection, one might argue that there are also maraschino cherries and grapes. 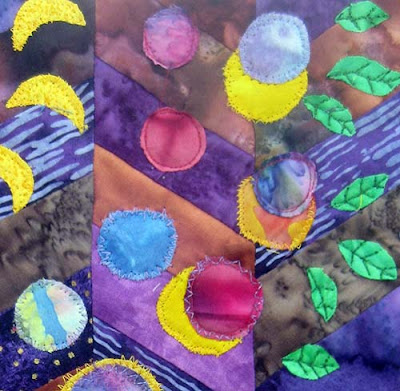 Oh well. I added batting and backing, and freemotion stitched everything down. I hand-embroidered the location and date on the telescopes. 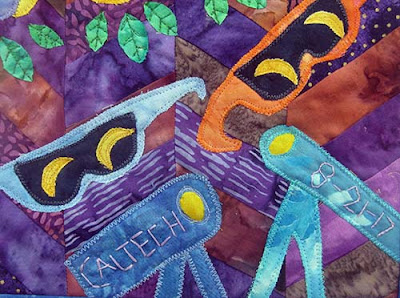 I do still have one extra strip - maybe I'll try some serious bleach discharge on it.

Or maybe I'll just throw on some more bananas.

You have until September 15, 2017 to complete your eclipse-inspired art work, take a picture and upload it to social media using the hashtag #EclipseArtQuilt.  There's no judge, no jury, no voting, just sharing!  It's a cyber-Be-In.

Posted by Cathy Perlmutter at 8:21 AM