My Newest City Quilt, a Triumph (for the Cat)

Fresh from the photographer! My newest quilt - it's about 70" high. I should have blocked it, look at that top edge, curved like an archery bow, oy! 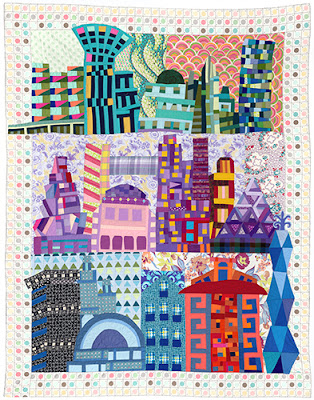 This quilt started out with a pile of buildings from my earlier city quilts. Playing with leftovers is SO much more fun than starting from scratch. Along with not having to face a blank design wall, trying to redeem flawed fragments makes me feel environmentally noble - like I'm keeping them out of landfill and thereby saving the world!
The biggest decision I had to make was whether to turn my leftovers into three quilts or one. It did occur to me that the top row could be finished by itself and called Emerald City....

...which would make the middle row Amethyst City....

...and the bottom row, Sapphire City? (Plus, whatever gemstone is orange. Are there any orange gemstones?)

My stash has way too many large-motif prints that can be challenging to use. I decided to use them for the skies. Two of the prints came from well-worn 50s/60s aprons.

The first apron - from my family - was this groovy rainbow fabric, a weave so coarse it might be linen. There's a stubborn 1/4" bloodstain that probably makes it unshowable; and the apron was small and oddly shaped, so I had to set one strip sideways, down the far right edge. Despite its limitations, I love its happy, Peter Max mood. 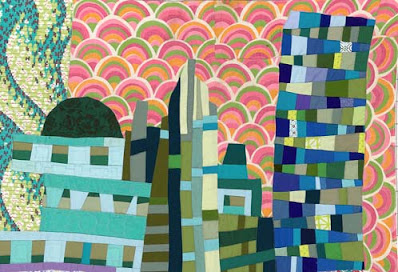 The second old apron, from a thrift shop, was the hallucinogenic print below, in colors (beigeish-orange, burgundy & neon green?!) so horrible they were almost good! 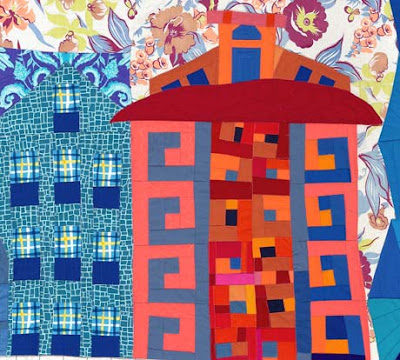 The pyramid in the Amethyst neighborhood - arguably inspired by the Louvre - is set against another vintage fabric sky, a mostly white floral that I'm guessing is from the 70s. 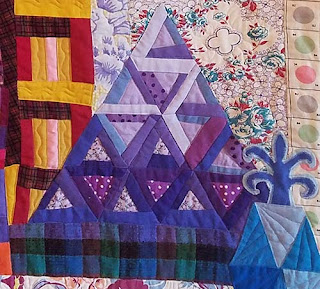 Because I myself happen to be a vintage quilter (quilting since 1991, breathing since much earlier), I have sadly learned that old fabric - no matter how intoxicating the design, or how good the condition  - is likely to be weaker than new stuff. It rips much more easily. A quilt with old fabric simply won't last as long.

I considered this, but what the hell, psychedelic rainbows and beige-orange flowers are worth it. If Covid  has taught us anything, it's that we should live for today! I did throw in some new fabric skies; in the purple section, I used this Kaffe Fasset floral print: 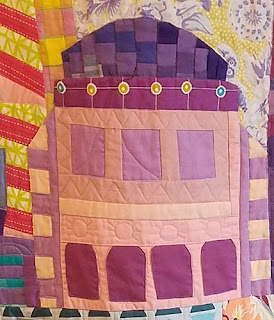 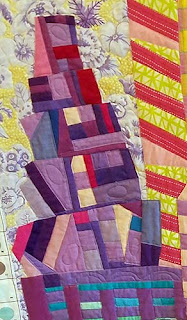 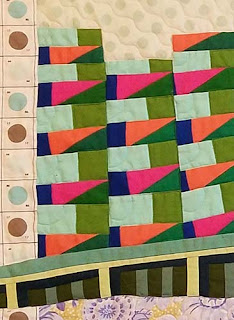 In the blue section, below, the half shell was my first draft for two Hollywood Bowls that wound up on two Los Angeles- themed quilts. The mostly black-and-white tower to the left resembles LAX's control tower. The structures are set against a new blue print (by Frou-Frou) with floating triangles on a pale blue background. Initially I thought of the triangle print as the sky; but now I think it looks more like a building with triangular windows, which works, too! 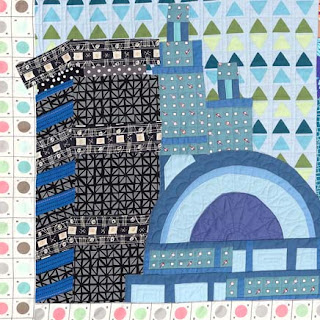 And speaking of triangles, there's another triangle-based building on the far right of the blue city:

This was based on the Hearst Tower in New York City. Here's my photo of it. (Taken way back in the old days, when people "travelled.")

And below is a more careful version of it that I made for one of my New York quilts. The points match and there's perspective because it's not improv pieced like the one above; I made a foundation paper piecing pattern.

This quilt itself a sort of landmark. It's my first quilt which was fully embraced by a cat during and after construction.
Here's the story: My newly-minted college grad daughter, Class of '20, moved back in with us a year ago, when the pandemic broke out. She wanted to adopt a kitten, an idea I'd always resisted because I worried it would endanger itself in my sewing area (which doesn't have a door, and is challenging to block off), not to mention that I didn't want cat fur all over my stash.
Well, the best laid plans. Cleocatra turned out to be charming, brilliant, and sneaky; she easily moved and slithered past the heavy folding doggie gate that we placed in different configurations at the entryway.
She also outcharmed my emotional resistance to cat fur. So here is Cleo, celebrating her victory, right after I finished the quilt and laid it on the floor. 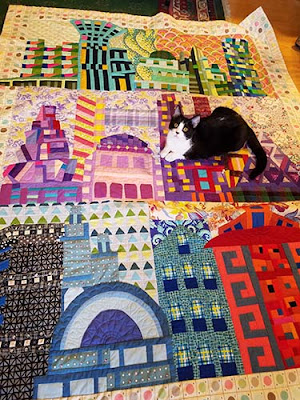 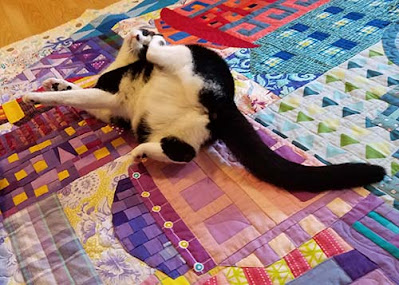 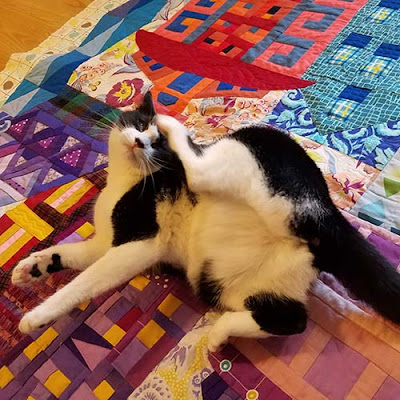 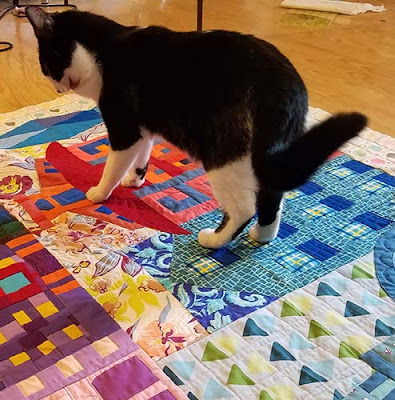 I surrendered completely.
To see my earlier city quilts, click "Cityscape quilts" in the word cloud on the right. My booklet, with the methods I use to make quilts like these is in my Etsy shop, here. Cat fur removal methods will be gratefully accepted! (I already ordered a Chom Chom roller.)

Posted by Cathy Perlmutter at 4:29 PM