Say 'Yes' to the Wedding Quilt, Part I: Everything you need to know about making a wedding quilt (chuppah) is on reality TV

I have a secret guilty pleasure—tell no one! It’s that t.v. show called ‘Say Yes to the Dress,’ about brides and their families and friends, shopping for pricey wedding dresses. 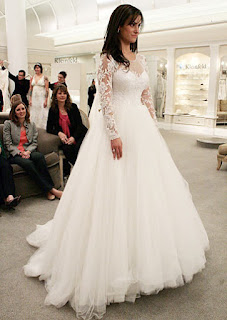 Shows need plots, and in this one, it’s usually a power struggle. Whether concocted by producers, or genuine, I don’t know (some say ‘reality t.v.’ is an oxymoron), but on nearly every episode, a sister, mother, best friend, or groom tries to force the bride to buy something that he or she loves, but the bride does not.

In the dressing room, one of the sales associates – all skilled psychotherapists   –   gives the bride a powerful pep talk, explaining that if she’s old enough to get married, she’s old enough to choose a dress. Meanwhile, the manager is out by the runway, scolding the rude entourage. An invisible, troubled-sounding male narrator ominously intones, “Will Rachel’s mom [sister/cousin /best friend] stand in the way of her dreams?”

After a commercial break or three, everyone behaves better, and the bride nearly always winds up with the gown she loves. In the closing moments, the now-jubilant narrator declares: “If a bride stays true to her style, she’ll glow as she walks down the aisle,”  or, “If everyone keeps an open mind, she’ll walk down the aisle looking divine.” It often rhymes, or nearly rhymes.

Formula, yes, but in today’s troubled times, I find it soothing. As an unrepentant quilt embellisher, I enjoy looking at lace, tulle, silk, satin, tiaras, pearls, bows and bling. Pretty dresses, pretty brides, pretty crazy entourages and pretty steep prices (from $1,000 to $30,000 or more) – except for the tab, the stakes are pretty low. So it’s relaxing to listen to The Show while I quilt, or take coffee and chocolate breaks to watch.

Over the past several months, my whole life began to morph an episode of The Show.  That’s because height of my addiction coincided with working on a commissioned quilt that would also serve as a wedding canopy, called a “chuppah,” at a Jewish wedding.

This bride first wrote to me in December telling me she wanted to collaborate in making an heirloom quilt that would serve as a canopy for her summer wedding, and then would stay in the family as a quilt for generations.

I‘ve made chuppot (the plural in Hebrew') before, but never while hooked on bridal t.v.  The next thing I knew, the edges of my daily reality got all fuzzy, like on The Twilight Zone, and I transmogrified into the supportive Sales Associate, while my bride became, well, The Bride. She had the hopes and dreams, and it was my job to help her realize them.

Here are some of the lessons I learned that are as true of helping a bride choose a wedding dress on reality television as they are of making a bride a wedding quilt in regular old reality.

1. Start with the visuals. Sales associates like it when brides bring in photographs of favorite gowns. They don’t have to guess from a zillion possibilities. Similarly, my collaboration with this bride started with images. She told me which quilts on my website she liked best. She also told me she wanted a scene of Jerusalem in the middle, surrounded by a Hebrew quotation. I started sketching variations and emailing them to her as pdfs. (I sketch them on my computer - I find Coreldraw easy and intuitive). I had some Jerusalem fabric in shades of gold, and I scanned it to use it in the drafts as the Jerusalem landscape.

Ideas flew back and forth. (By the way, the Hebrew in this image and the one below is nonsense/placeholder Hebrew. Don't worry, we straightened it out by the time of the wedding!) 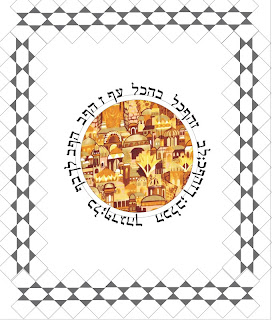 We soon learned that what really needed figuring out was the border, which brought me to the next lesson…

2.  More is more.  In t.v.-land, some brides want it all – rhinestones, pearls, lace, feathers, beads, ruching, fabric flowers, a train, the whole 9 yards (literally).  The sales associate has to break the news that more costs more.  My bride especially admired one of the most complex quilts on my Judaiquilt website, called ‘Invocation’. 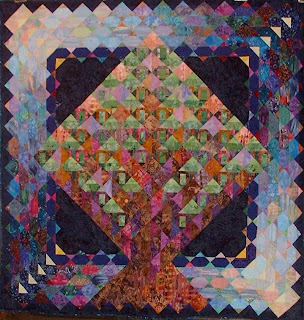 Oh sure, what’s not to like? That particular piece is the quilty equivalent of a gown by P’nina Tornai  (designer of famously sexy, overwrought wedding dresses. Yes, that's a see-through bodice). 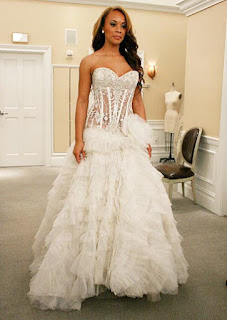 Invocation isn’t sexy, doesn’t have any bodice, nor tens of thousands of sparkly jewels, but it is a bit overwrought, with a 500+ piece border, made from dozens of different batik fabrics in shifting values, which took me, oh, about a decade (on and off) to arrange.

So, just like a sales associate  suggesting only gowns within the bride’s budget, I tried very hard to focus my bride with sketches of MUCH less complex borders (like, 14 pieces instead of 500). 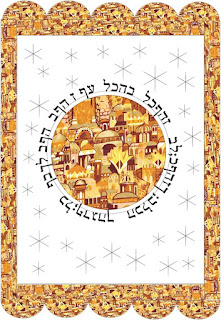 No go. She kept choosing the more intricate options. I reluctantly told her that, if she really wanted that 500-piece border, I would have to raise the initial price. I held my breath, as they always do on The Show, wondering if the bride’s family could or would pay the extra to get what they wanted. They did.  Phew!

4. Sometimes the Bride has to touch the textiles. From The Show, I learned that there are poufy “ball gown”-style wedding dresses, which differ from slender “mermaid gowns,” complete with tail fins – who knew? A bride who walks into the salon wanting to look like Cinderella might, to her shock, walk (or swim) out looking like The Little Mermaid. Or vice versa. Only by trying a dress on can she learn what she likes.

Similarly, figuring out colors and textures for our quilt.  In our early emails, my bride told me she imagined ‘royal’ colors, like golds, silvers, coppers, and whites. I couldn’t quite figure how that would work in cotton batiks, which I had initially planned to use (Batiks are what give Invocation a painterly quality). If a quilter’s cotton isn’t overprinted with metallic ink, the golds, silvers and copper become yellows, greys and brown. So I offered alternatives. What about adding more color, in jewel tones, like blues, purples, greens?  Then I had another idea: What if I made the quilt in silk dupionis? Then they would have the metallic sheen! I sent her lots of snapshots of different shiny fabrics. 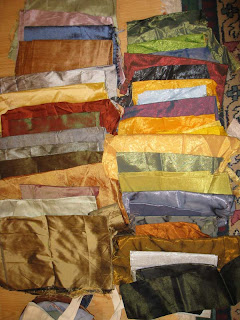 What a mess, right? It took me a while to realize that all these photographs were confusing us further.  A photo can only go so far in capturing the real look, feel and hue. In desperation, I stuffed about 30 fabric swatches into an envelope, and mailed them to her, in the good old U.S. Reality Mail. I asked her to sort them into three piles: Love, Indifferent, and Hate.

She and her fiancé did the sorting together. When they mailed those swatches back to me, in three  marked bundles, I could never, ever have predicted the results: 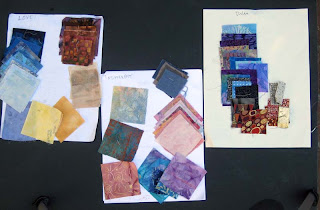 I stapled the results to three seperate pieces of paper. LOVE swatches are on the left; INDIFFERENT in the Middle; and  HATE on the right.

They loved many of the blues, browns and tans. Hated all purples and greens! They didn’t like grays (= cotton silvers). They were indifferent to the pinks. But there were lots of exceptions, which took me completely by surprise. They disliked several of the blues that were the exact same hue as the blues they loved, but which had a different subtle print or batiked design. Same with the browns. Same hue, but different patterns, raised strong feelings in them, much more than I would have predicted.

I hung the three sheets on my wall, and referred to them frequently, making the quilt as much as possible from LOVE set, throwing in INDIFFERENTs when necessary, and no HATES, of course.  This very specific information was pure gold in terms of steering my fabric choices.