(This is #2 in my 'quiltlet' series. 'Quiltlets' are strips that can serve as bookmarks, bracelets, coffee cuffs, wall art, and more. Read the introduction to the quiltlet project here.)

Since my earliest quilting days,  I've been enthralled with novelty fabrics (also called 'conversationals'). If there's a noun, meaning a tangible THING (other than a flower) somewhat realistically portrayed on the fabric, it's sure to get my attention. If it's something really offbeat, I have to buy it.

Much more recently, when I began looking at novelty fabrics in my stash as potential quiltets (ie jewelry, bookmarks, or art),  it was surprising which ones triggered a creative impulse (or at least, a good laugh). You, too, will chortle abundantly when pondering various fabrics and their potential meaning for you and your giftees.

For example, one day I walked into my LQS (local quilt shop) and saw this:

(Ignore the lines of silver threads - they came later).

Garlic so vivid, I could practically smell it. With highlights of pink, yet! I grabbed it, planning to use it in the framable food-themed potholder art I liked to make as presents for friends (before discovering quiltlets).

A few months later, while perusing my stash for quiltlet material, that garlic again jumped out at me.

This was my train of thought: Garlic is a talisman. During the early part of the 20th century, when my dad was growing up in the tenements of Williamsburg NY, desperate parents (including my grandmother) tied little bags of garlic around their children's necks, believing it could protect them from the raging polio epidemic. It worked out for my dad and his brother - but not for many others, of course.

Then there's the vampire thing. Vintage Dracula movies suggest that garlic repels vampires. More recently, there are those Twilight books and/movies. Oy, Twilight, don't get me started! Too late. I read the first book - it wasn't easy to finish - and watched about 20 minutes of one of the movies.  In the latter, Edward Cullen, the handsome hero vampire, wears so much white makeup that it's hard to figure how he and the whole cast can keep themselves from bursting into giggles in every scene. What's more, Edward  is a century or so older than his passionate love interest, high school student Bella. (Speaking of my tenement-raised  father, if that same, now-87-year-old happily-married father of mine were to leave his assisted care facility to enroll in a local high school and start a torrid love affair with a sophomore, their relationship would STILL be more age-appropriate than Bella and Edward. Ponder that, young Twilight fans. If you still like the idea, consider visiting assisted living facilities for dates. You'll be doing a huge mitzvah.)

So this bracelet is a discreet book review. Wearing it and/or using it as a bookmark may well ward off Twilight books, movies and merchandise. However, if you or a loved one adores Twilight, they would also enjoy using this very same quiltlet, perhaps as a way of voting that they would prefer that young teen Bella wind up with Jake-the-ripped-muscle-but-age-appropriate-werewolf, rather than Edward-the-vampire-retiree.

All that in just one strip of fabric!

The button is made of glass, and I found it in a colorful assortment of European buttons at a quilt show. Why is it yellow? I do not know. Perhaps it's a different allium, like an onion. Or a shallot. I'm sure vampires loathe them, too.

UPDATE: Garlic is also incredibly healthy to eat. So this bracelet can serve as a nutritional reminder. 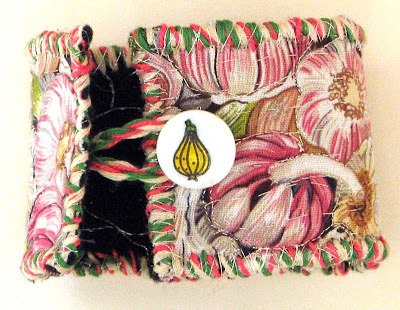 1. Find a novelty fabric that tickles your fancy. Cut a strip that's 1" longer than your wrist measurement, and about a quarter inch higher than you want (I wanted this bracelet to be 2 1/4" high, so I initially cut it 2 1/2")

2. Back the novelty fabric with paper-backed fusible web (Like HTC Trans-Web, my current favorite; or  a light or medium-weight Pellon Wonder Under.) Remove the paper.

3. Iron the backed novelty fabric to a piece of felt, in whatever color you like (I used black) You might need to lower the heat a bit to avoid melting the felt (if it's a polyester felt). Use a press cloth to protect the iron and the ironing board from accidental melt-downs.

4. Once fused, trim the strip down to the height you want, and a length that is the same as the circumference of your wrist. (The leeway is going to come with the loop, later.)

5. Hand- or machine-quilt the strip. In the bobbin, use a color of thread that blends in or contrasts against the felt color. (I went for contrast, with silver metallic in the bobbin). On top, I outlined each garlic by machine with silver metallic thread. Then I hand-stitched large-stitch straight quilting lines, horizontally across the strip, at about 1/4" intervals.

6. Finish the edges. I used embroidery floss in a variety of coordinating colors. Load up a large-eyed needle (like a chenille needle) with all six strands of an embroidery thread. Stitch around and around the raw edges, until they are pretty well covered. I went around three times with green, pink and white embroidery floss, and then once more by hand with silver thread.

7. Measure out about 15" of your embroidery floss. Cut three strands to that length (I used one pink, one green, and one white strand, but they can be all the same color).

8. Braid the strands together; OR, twist one end of the strands in one direction, and the other in the other, until loosening tension on the strands causes it to fold itself in half and create a double strand. You'll need the finished braid or twist to measure about 5". (Note: For more directions on twisted cords, plus many other cord-making approaches, go to this awesome page: http://www.squidoo.com/cords-for-jewelry-and-other-uses )

9. Fold the finished strand in half.

10. Tie an overhand knot near the bottom. Trim the ends.

11. Stitch the loop securely underneath one end of the bracelet, so about an inch of loop is sticking out. 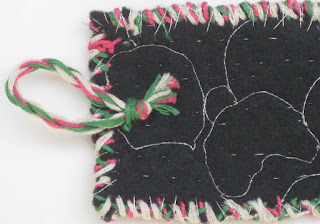 12. Sew a button to the right side middle of the other end.

13. Voila! I guarantee that, whether you keep it in a book, over your bed, or on your wrist, your new quiltlet will prevent attacks by pale, goodlooking, lusty, undead centenarian vampires impersonating high school students!