An Internet Signature Quilt for a Tough Guy 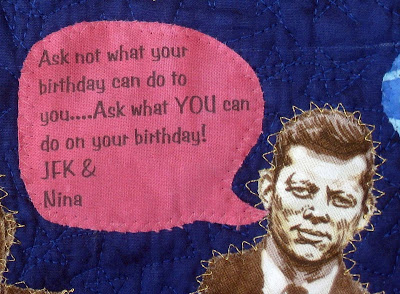 Eight years ago, when my Dad turned 80, I wanted to do something special for him. He and Mom lived in Massachusetts - I'm in California. It was long past time for them to move close to us, but Dad resisted. He had his pride and his routine, devoted to two passions: writing books on American ethnic history, and caregiving for Mom, whose dementia was advancing. A birthday party was out of the question.

Fortunately, several years earlier, I had purchased a couple of yards of presidential fabric. 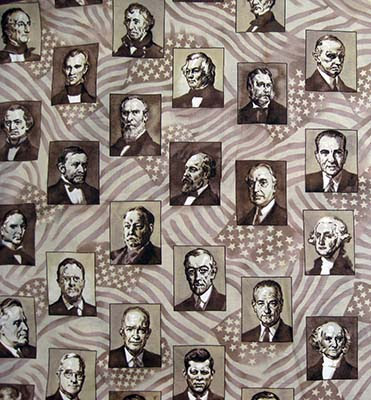 It's monochromatic, in uninspiring shades of brown, but the greatness of it is that it includes most (but, inexplicably, not all) of the presidents, up to then-president George W. Bush.

Despite his advanced age, my father had mastered the Internet well enough for flourishing correspondence with far-flung friends. Along with discussing history, politics and religion, they traded corny and/or appalling jokes, many of which only men of his generation could find funny.

I thought about making him a "post office" quilt. But sending out pieces of fabric and asking for their return with signatures and decoration is not only a monumental amount of work, but also didn't seem right for his crowd. He and his friends reveled in words and  ideas.

The solution struck me in a flash: Use the Force, i.e. the Internet! Collecting wise and wiseguy words from Dad's crowd could conceivably take microseconds instead of months!  It helped that I had complete access to his email list (because he hadn't learned about 'BCC' yet.)

(And this was well before Twitter, which might have made the project even faster, and the contributions even more succinct!)

So I did a mass e-mailing. I explained about the presidential fabric. I asked people to either write a short birthday message that had nothing to do with any president; or, if they wanted to play the game, they could pick a historic president and I'd literally put their words into that president's mouth!

When the messages flooded in - within minutes, hours, and days, for the most part, I was blown away! 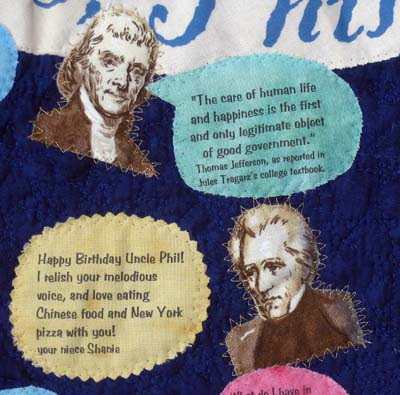 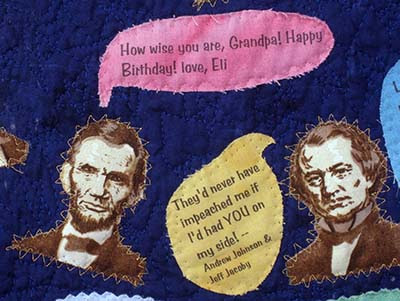 Dad's friend Jeff, a political writer, claimed a whole bunch of presidents, and he did his homework. "They'd never have impeached me if I'd had YOU on my side...." Jeff put into Andrew Johnson's mouth, above right. Jeff also used historical facts and quotations to channel Coolidge: 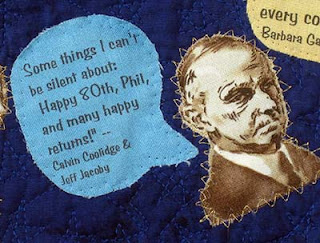 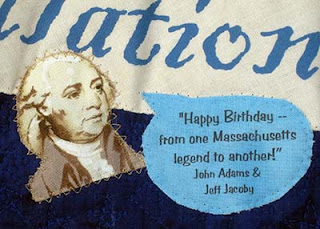 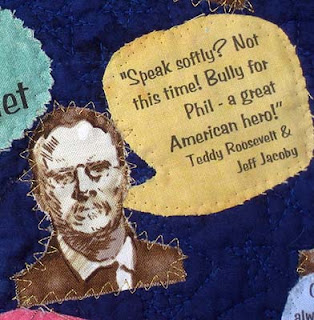 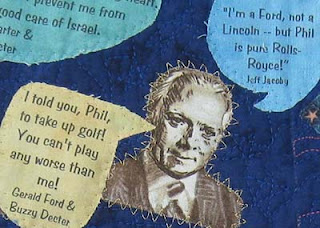 For Millard Fillmore, a niece wrote a little quiz about the eerie parallels between Millard's life and her own. I set the answers upside down. ("They're both suspicious of both Democratic and Republican parties."] 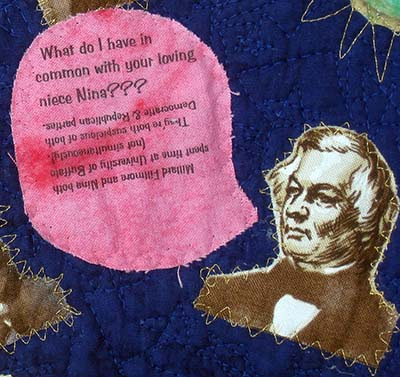 Two different people claimed Nixon, one  a conservative, one a liberal. So I had him speaking out of both sides of his mouth! Perfect! 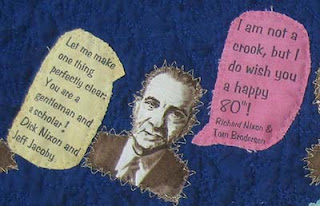 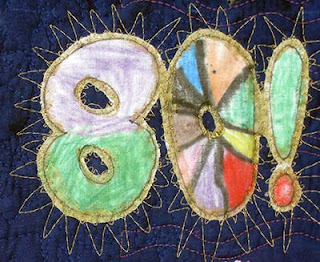 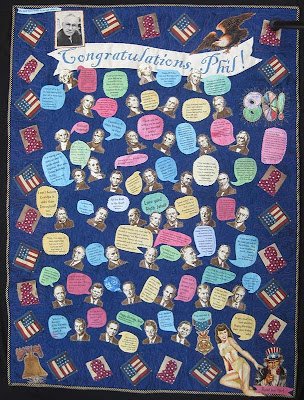 It measures about about 30" x 40". Although it had none of the hassles of a post office quilt, it was a lot of work to identify each president. (The fabric didn't name them, and pre-Obama, let's face it, they all looked alike!)

To applique the heads, I fused paper-backed web to the back of each, then cut close around.  Then they were pressed onto a gorgeous deep navy-blue fabric.I stitched them down with gold metallic thread, in a three-step zig-zag, giving each head a golden aura of charisma and power which some of them may have enjoyed in life (or not). 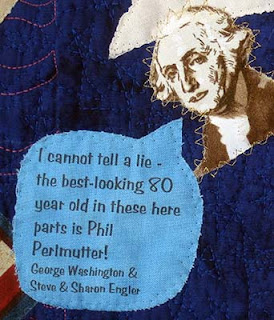 The quotations were printed onto 8 1/2" x 11" sheets of fabric that I had hand-painted green, blue, red, or yellow (with translucent Setacolor paint), fused to sheets of freezer paper, and sent through my permanent ink printer. (Everything you ever wanted to know about using an inkjet printer to print on fabrics is summarized by Gloria Hansen, here.)

I raw-edge appliqued the word balloons to the navy background with invisible thread, also using a three step zigzag.

The top features a photo-transferred picture of Dad: 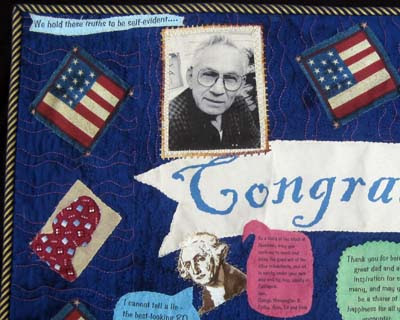 The 'Congratulations' banner is printed out on white fabric (two sheets stitched together.) In the bottom lower corner, I added a symbolic representation of Mom, plus Uncle Sam (saying "Read our Lips") and a medal. 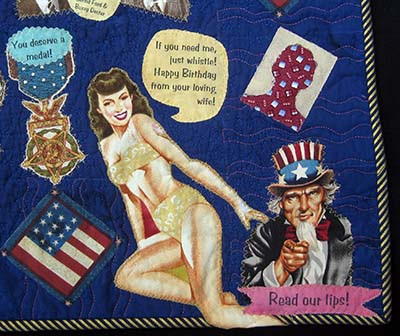 I added quotes that weren't particular to any president into random spaces near the lonelier heads: 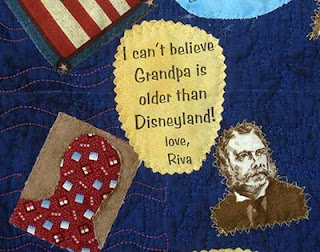 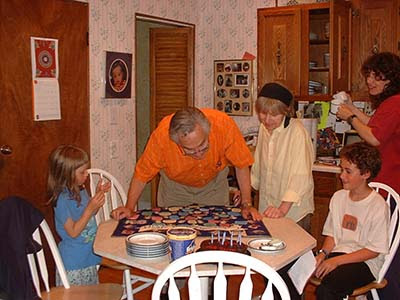 It hung in their house in a prominent place, until they finally moved to California 3 years ago.

Last winter, Dad died unexpectedly, at 87. This quilt happened to be on my living room couch - I'd hand-carried it back from packing up their Boston house, and was planning to hang in their assisted living apartment.

I was so distraught that I actually considered burying it with him. But after a few moments of thought, I dismissed that idea. My Dad was one tough cookie. He had faced down poverty as a child in the tenements of Williamsburg, NY; he'd survived abandonment by his father; combat in WWII as an infantryman; and, most difficult of all, in his senior years he bore daily witness to Mom's heartbreaking decline. That was the only situation that ever defeated him. Dad didn't need a security blanket. Dad WAS a security blanket for all of us who loved him.

So I still have it. Even though none of the quotes are actually from him, it captures his essence.
So I have two questions for you: Have you made an Internet quilt? A Twitter quilt? I'd love to hear about it !
And second, what do you do with birthday quilts when the celebrant is no longer around?

Update: Shared on Nina Marie Sayre's 'Off the Wall Friday.' Find more art quilt eye candy there at http://ninamariesayre.blogspot.com/2013/07/renewal-of-fall-project-off-wall-friday.html.
Posted by Cathy Perlmutter at 11:16 AM