Elvis and Other Real People on Quilt Fabric 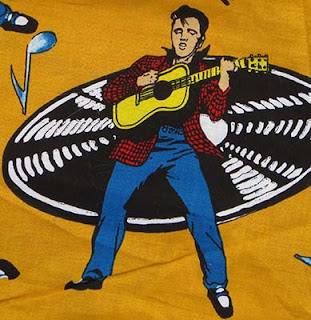 I don't particularly love Elvis; nor do I dislike him. I was a little young for him (the Beatles were the rage in my pre-adolescent years). So I was Elvis-neutral - kind of cute, kind of kitschy.

But when I first started quilting about 20 years ago, there weren't many novelty fabrics featuring people of any kind - let alone real people. Let alone real interesting people. One of the very few people-on-fabric in the 1990s was Elvis.

There were a handful of Elvis fabrics. One had a figure of Elvis, legs akimbo, strumming his guitar in front of a giant, shiny black record, against a bright yellow background (at the top of this post). Another depicted Elvis in heaven, floating among clouds and purple electric guitars (here). And then there was the Andy Warhol version -  four small repeating Elvis heads in neon colors - moody young Elvis in pink; happy youngish Elvis in blue; laughing soldier Elvis in gold; and intense jowly sweating middle-aged Elvis in green. 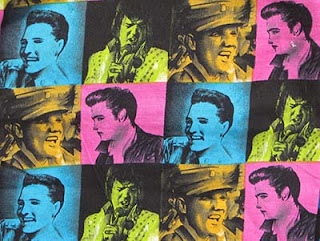 With few other options, Elvis fabric became meaningful to my quiltmaking. He came to symbolize whatever I happened to need at the moment - Everyman. I used him as a stand-in for my Dad on his birthday quilt. I used him to represent a good friend in a Tokyo street scene quilt. Heck, I even decoupaged him to a defunct toy sewing machine.

I also made several small Elvis quilted wall hangings. The main idea was to have an excuse for using sparkly trim/fabric.

First came Gold Elvis. It's about 9 1/2" square. He's surrounded by jeweled green-and-yellow rhinestone trim, and, among other things, a hound dog. 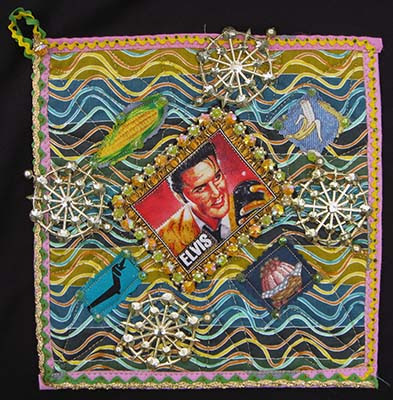 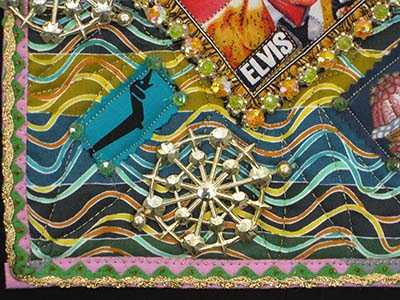 I really liked the rickrack I used in  the borders, embellished with dots of dimensional sparkly fabric paint. Those large gold snowflake stars are deadly plastic Xmas tree decoration with remarkably sharp stabby points. Don't allow them into your home. 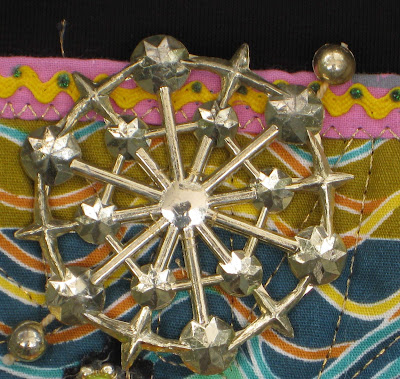 Whew, that was a lot of work. Silver Elvis, which is about the same size, was a lot simpler: 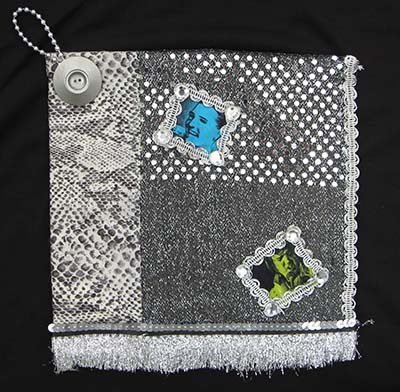 Here's a detail. Those are rhinestones in the picture frame corners. 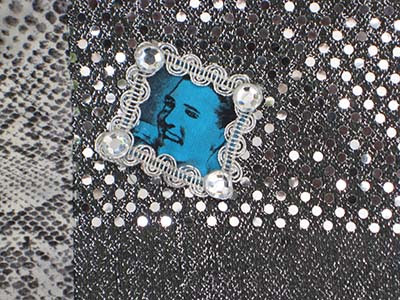 And speaking of hound dogs, here's one of my all-time  favorite small wallhangings, with the canines gazing lovingly at you-know-who. 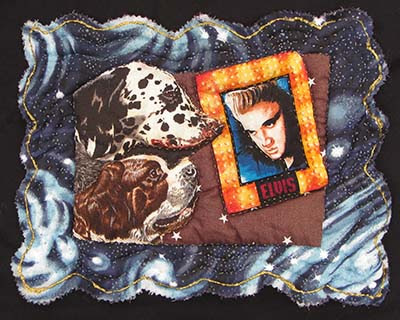 (This has been hanging on my playroom wall for years. The fabric behind the picture frame used to be a dark navy blue with white stars; unfortunately, the navy has faded to brown).

Whenever I would show or even just mention that I'd made things with Elvis fabrics, I would receive floods of emails from people asking me if they could buy the Elvis fabric off of me. No way, I thought! They'll have to pry my precious few remaining inches of that fabric out of my cold, dead hands!

But then, a couple of years ago, the fabric companies woke up and started offering entirely new lines of Elvis fabric! (Probably devaluing my vintage collection.) If you do a Google image search for "Elvis fabric," you'll be overwhelmed by choices.

In the late 90s, I wrote an article about OTHER real people I'd love to see on fabric. These included (in no particular order):
Today, I'd add to that list:

This past year has been a fabric geek dream come true, as both Star Trek and Star Wars character fabrics have come on the markets. Want to find them, or the new Elvis fabrics, or other character and novelty fabrics? The easiest way to locate a fabric is to go to http://quiltshops.com/search.htm. Type in the key words and click 'Thumbnails.' You'll be amazed!

Posted by Cathy Perlmutter at 12:23 PM