The Joy of Vintage Neckties: Unions and Silk

I'm in a  creative slump.  Really, I can't think of a thing (beyond potholders). And as you've probably discovered, when you can't think of something, the best thing to do is anything.

So I pulled out my box of neckties and necktie scraps, and started covering buttons with them, using cover-button kits.

So I cut the point off a green-and-blue-striped necktie, made a couple of folds, and secured it with one of the covered buttons plus four tiny mother-of-pearl shank buttons: 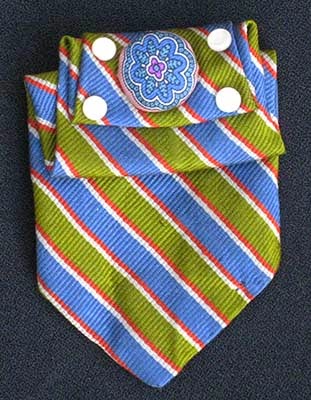 The front looked plain, so over a week I tried 8 billion or so different embellishments. Each was worse than the one before. 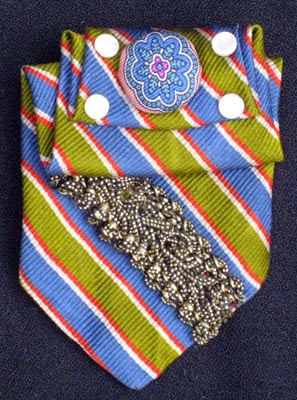 Ugh. That looks like a medal for a banana republic dictator. Many iterations later, I tried a chain. 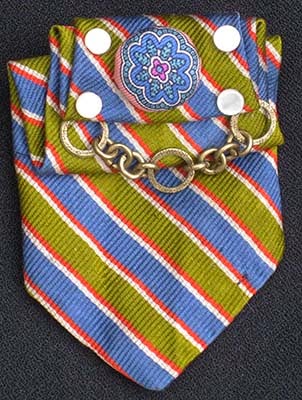 Finally! I stitched the chain's ends in place. On the back, the cut edge is folded inwards to hide it, and I stitched on a brooch pin. 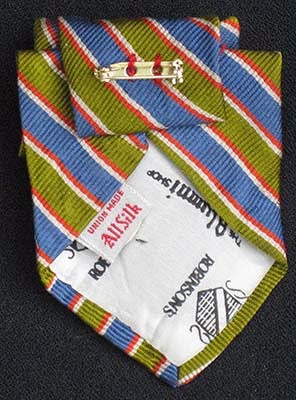 That white lining says "Robinsons" - hey, remember Robinson's Department store? Thanks to the Internet, I now know they're out of business. No wonder I haven't seen them in years. Which probably means the necktie was highly collectible 'til I cut it up. Oh well. The content tag has regal lettering that says"UNION MADE All Silk." Unions and Silk! Diamonds and Rust! Fire and Ice! It's all good!

I cut off two more tie points - one from a  blue tie, and one from a red one - and folded the top of the blue tie point backwards. Then sewed shut the cut end of the red tie point and stitched it inside the blue tie opening. I wound up with this: 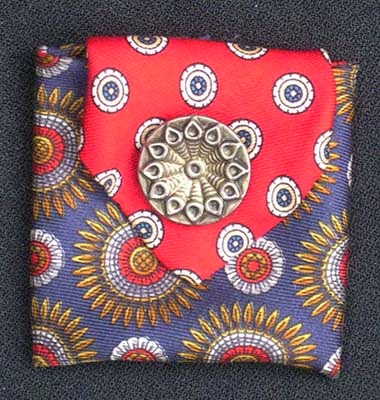 The tip of the blue-necktie is folded backwards, and hand stitched in a Y seam, to form a pouch.

I stitched a clasp to the back and added a chain.

Open it, and there's another winning label: "Made in USA of Fabric Hand Printed In Italy ALL SILK" [sic].  It's all-American, yet Italian! Like Unions and Silk! What's not to love?

I stitched in a black snap inside to seal it.

I still had lots of leftover necktie-covered buttons. So I sewed four of them to a conservative brown striped tie that I believe is from my late father's wardrobe in the 1980s. 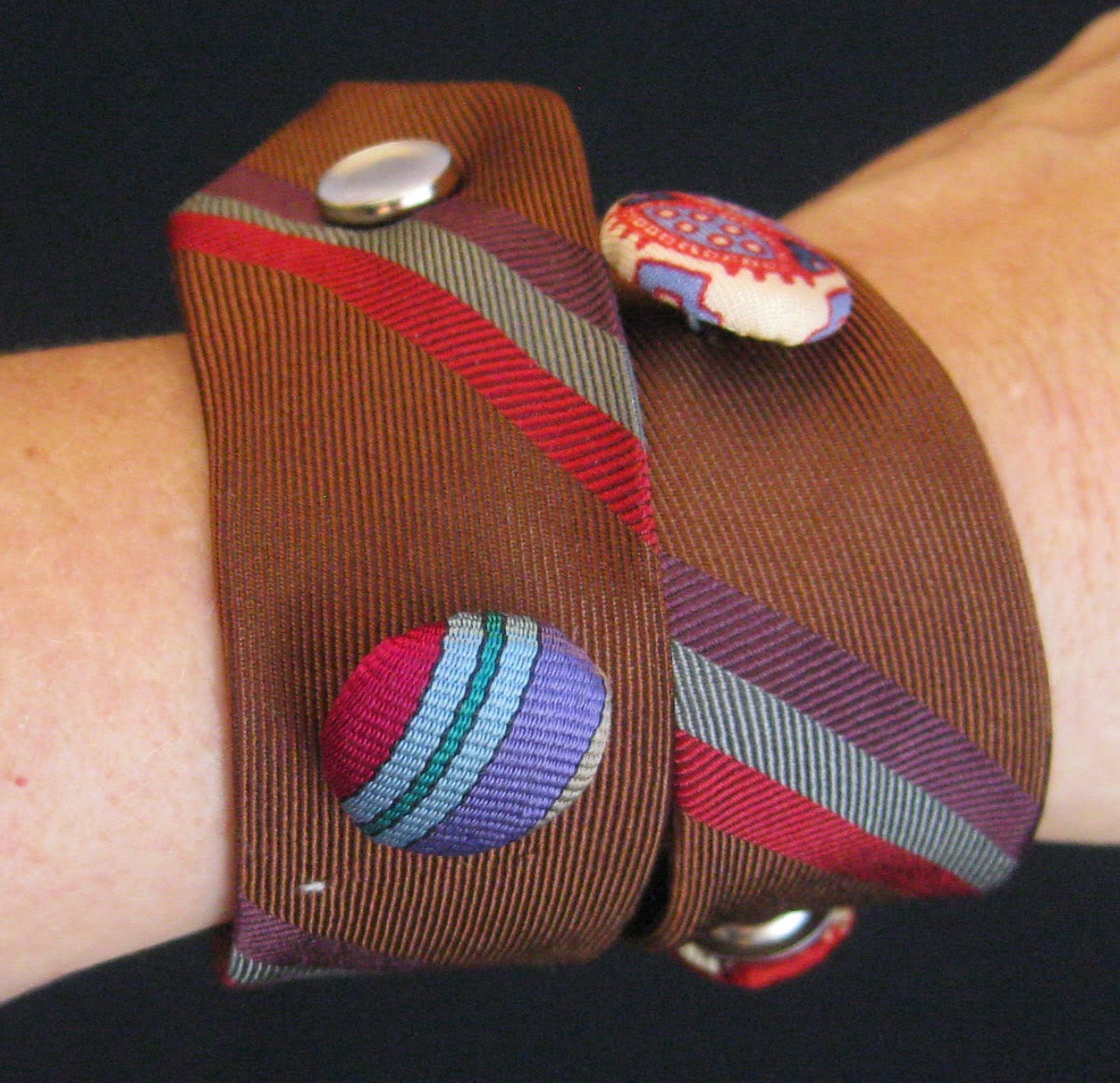 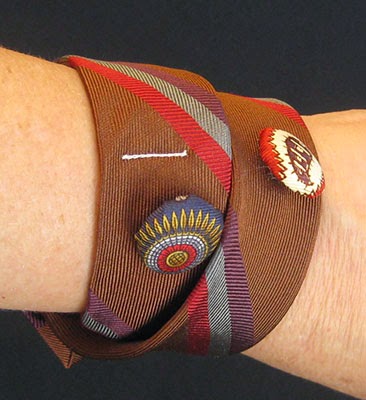 That mysterious white line of stitching above has to stay there because it's holding on the label in the inside, which you'll see in a minute. I cut the tie to about 16", which is the length that goes snugly around my wrist twice. I overcame my fear of snaps and hammered a snap in at either end. 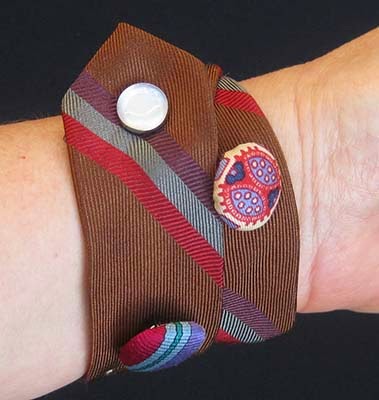 There are so many different snap kits -  the variety of methods, setters, and costs is all over the map. For this Dritz product, all you need is a hammer and a thread spool, I only ruined one in three attempts. So they work pretty well. 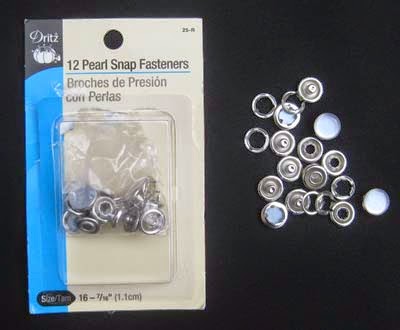 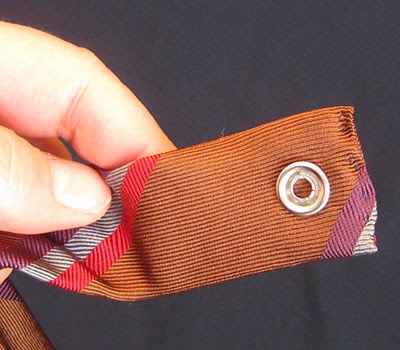 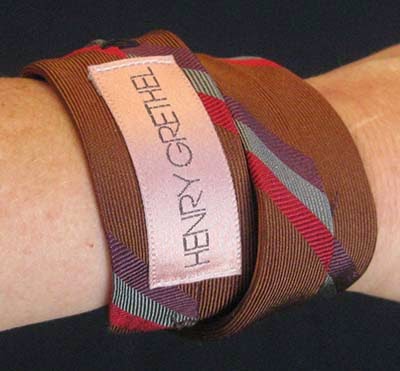 But who is Henry Grethel, I asked my Internet? Why, he's an American fashion designer born in 1931 in Syracuse, New York, who pioneered "elegant American sportswear," according to Wikipedia. His father was a plumber from Germany, and Henry is still alive, bless his heart at 83. Here he is winning an 'Icon of Style' award from Syracuse University! Thank you, Henry, for this fine bracelet with the elegant label! I am thoroughly enjoying it!

I did one more striped tie/cover button strip necklace, this one starting with a red striped tie from my Dad's collection:

The fabric on most of these buttons come from a scrap bag of fancy necktie silks that I scored at a flea market. 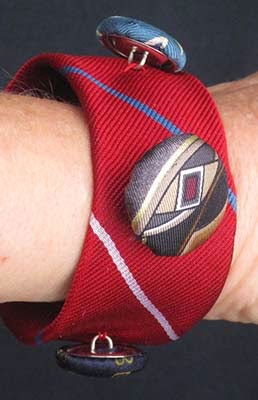 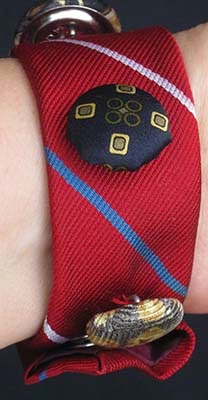 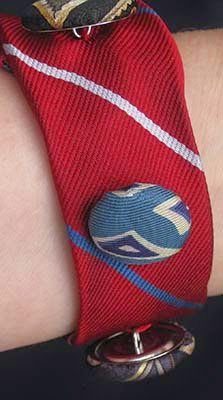 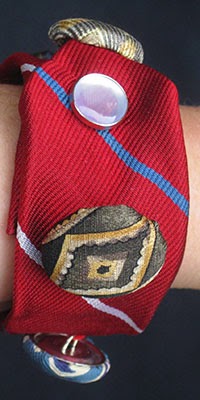 Hiding inside I found a cardboard price tag. It says, "All Silk, $22.50." My Dad bought all his neckties from Filenes' Basement in downtown Boston, so there's no way on earth he spent $22.50 on this tie in the previous milennium (and indeed, this isn't a Filene's price tag.) He probably paid more like $5-$10. 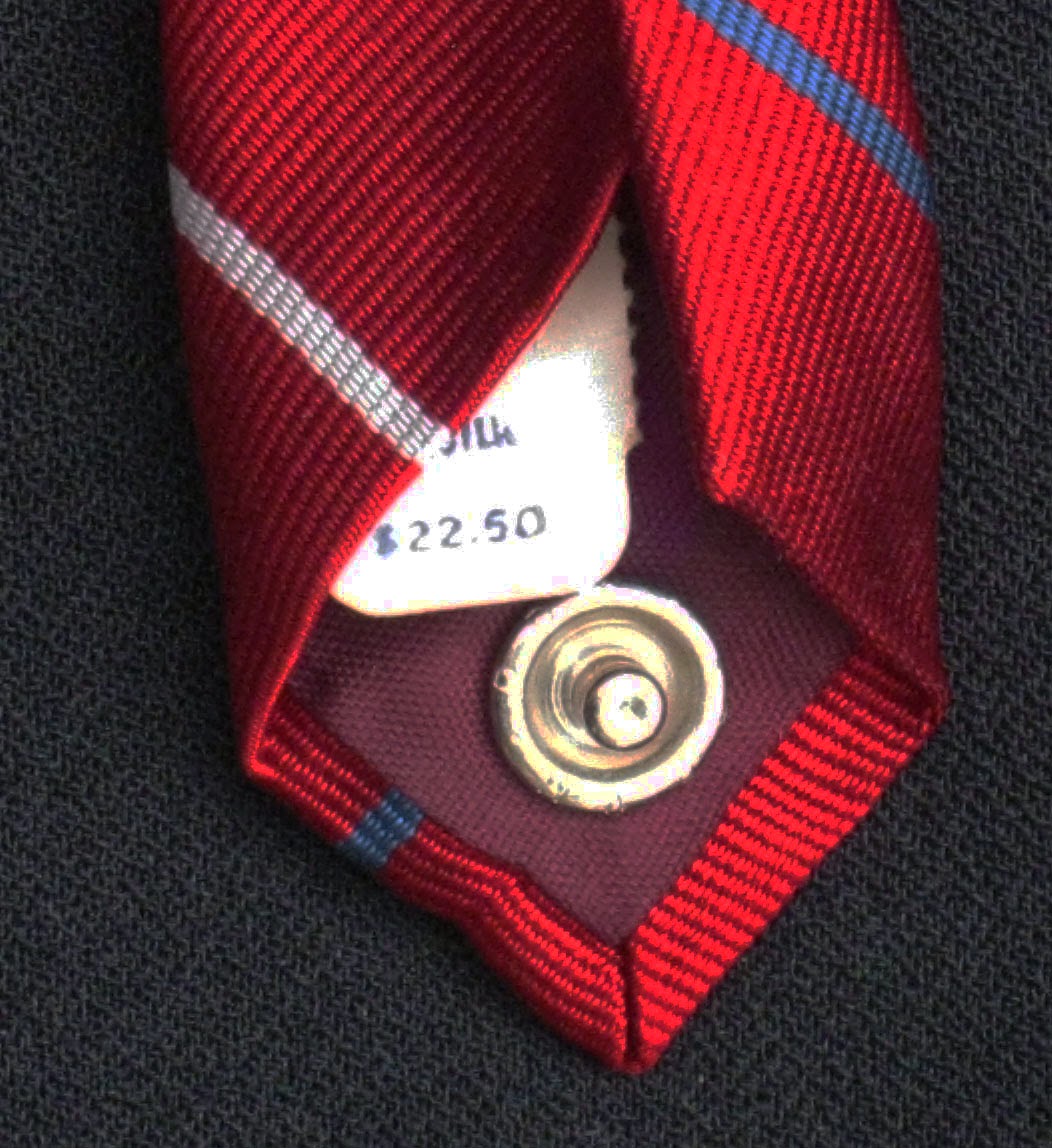 Wherever you may be, dear Dad, I hope you like what I've done with your bargain!

Posted by Cathy Perlmutter at 12:42 PM