I didn't watch the interview with then-Bruce/now-Caitlyn Jenner last month when she first announced that she is transgender, but I read about it, and one quotation stuck in my head, so to speak: "My brain is much more female than it is male."

That statement got me (and millions of others) thinking and arguing about what it means to have a brain that is masculine, feminine, both, or neither.

Hmmm, just like my fabric stash. I have karate fabric and soccer fabric and football fabric that only depicts boys and men.

And I have shopping fabric and housework fabric and handbag fabric with only girls or women, and/or in traditional girl colors. 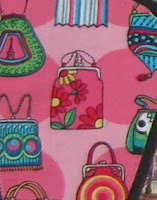 I do, however, have a golf fabric that depicts women golfers. 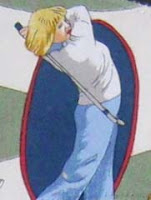 It seems obvious to me that all our brains have masculine and feminine elements, but then again, what exactly is masculine or feminine? Is golf inherently manly? Is tea womanly? (If so: What gender is coffee?)

So, into my own brain came an idea for a quilt with male, female, and uncategorizable aspects.

First, I looked at a lot of vintage phrenology images. Then I freehanded a brain chart on a large piece of paper. 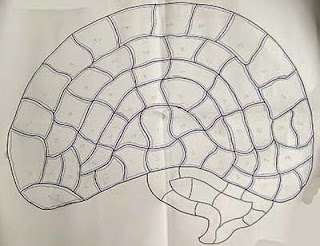 There are a zillion different ways to create stained glass effects in fabric. The technique I use here is adapted and simplified from Vicki Pignatelli's Quilting Curves. Great book!

I don't have a huge ironing board, so I put it on top of a thick beach towel on the floor, to protect the carpet from iron burns. I laid black fabric (to serve as a stained-glass leading) onto that surface. 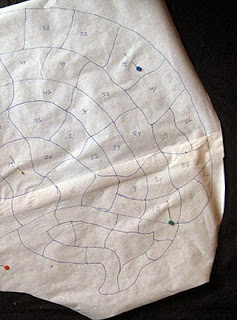 Beginning at an edge, I cut out a freezer paper piece. 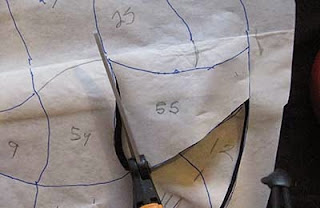 Placed it on the fabric to highlight the design. 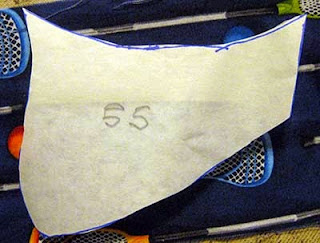 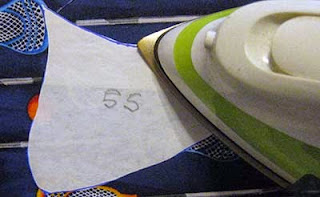 Cut a ways out from all the edges - 1/4" or more is good. Call this the safety margin. It doesn't have to be precise. 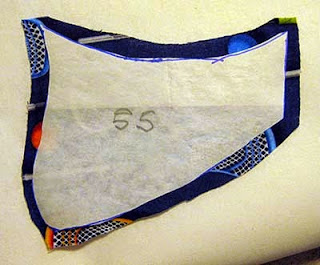 (Now I'm switching to showing you a green piece because I didn't take a picture of the next two vital steps with the blue piece above - sorry!)

Place the unit on top of the paper-backed fusible web, web side up, with the fabric covering the protruding fusible along at least one edge. 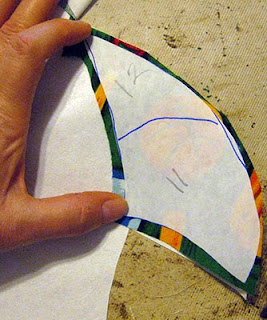 '
The upper right edge can be ironed safely, first. 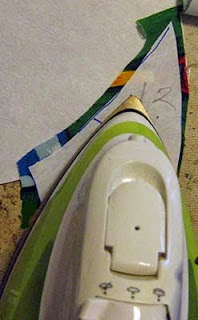 Once its partially pressed, cut the other edges off, cutting THROUGH the quarter inch margin of safety, but NOT going close around the paper pattern yet. Press again.

Once the web is fully adhered to the back, it's time to cut close around the freezer paper pattern. 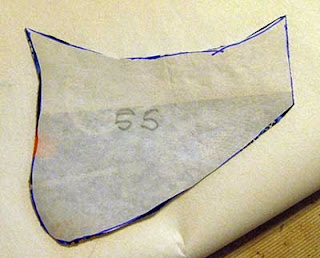 Peel away the freezer paper, but leave the paper backing behind the fabric. 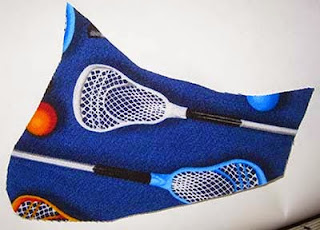 Count the sides. This piece has about four. Keeping track of where you started, cut all the way around the piece again, removing about 1/4" from each of four side (does not have to be perfect).

Now the fabric piece is smaller than the freezer paper pattern piece. This will allow the black "leading" to show. Put the piece back in position. You can see the black around all the edges. 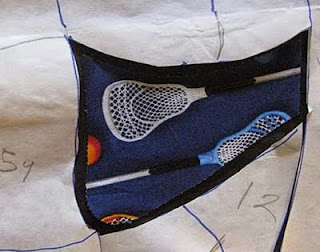 Optional: Pin paper back in position on top of it (this is especially important if your project requires a high degree of accuracy.) 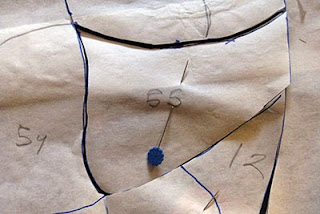 (Here I decided at the last minute to combine two pieces.)

Once you have done a bunch, it looks like this. 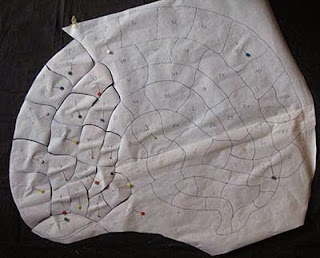 At some point, you can remove the freezer paper patterns. 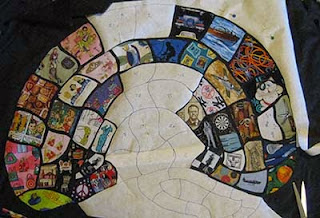 Press everything in position. 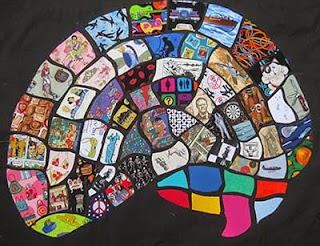 Cut around the entire shape. 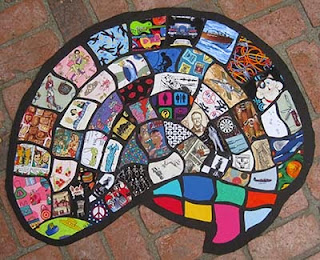 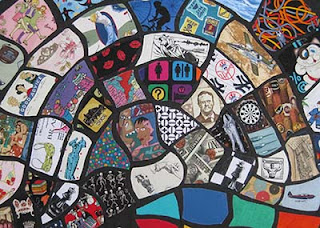 On the left side, which I arbitrarily dubbed the female side, we have the pink handbag fabric, chocolates, bras, childrearing, a tea party, a peace symbol, 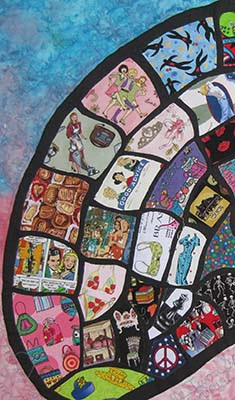 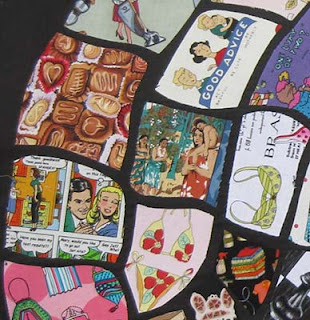 A closeup of the "Good Advice fabric: 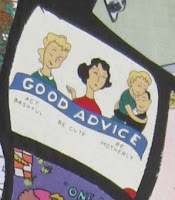 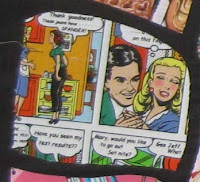 and of course, the womanly art of vacuuming. 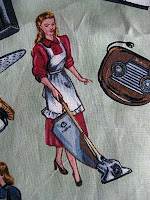 On the manly right side, I put Teddy Roosevelt, pliers, jacknives, darts, war planes, motorboats, basketballs, screws, electrical cords and the Yankees (among other things). 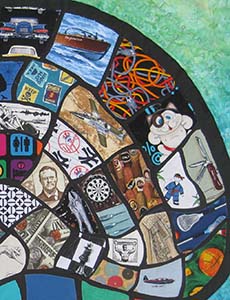 Down the middle I put many things whose gender association is not so clichéd...like maps; bicycles; mortality (skeletons). Ms. Golf. 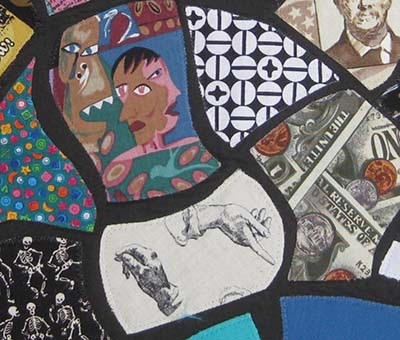 I stitched everything in place with a zig-zag stitch in invisible thread. Next installment: Stitching it on the background, and quilting 75 gender identities and orientations into the background. Sneak preview: 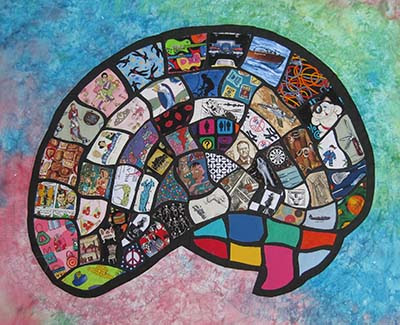 By the way, there is some science affirming what Bruce/Caitlyn described; Not only are male and female brains different, but gay men and straight women may have notable brain similarities distinct from those of straight men and gay women. (Read about them here..) 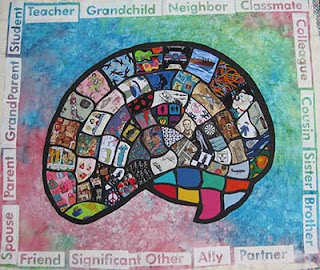 Posted by Cathy Perlmutter at 9:23 AM