Last week, I showed some of the quilts I hung at my local Jewish Federation office. This week, I'll show the Passover-only quilts that I considered and/or put on display. Yes, we're having Passover in August! First, my Pokemon-themed matzoh cover, made around 2000. 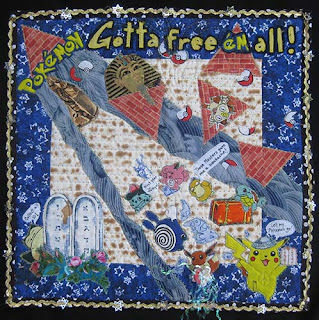 My son (now 23) was in kindergarten with Pokemon-crazed children. I interrogated one of them to find out exactly what Pokemons do. He explained that they have superpowers, and are captured by "masters," then forced to battle on the masters' behalf.  It sure sounded like slavery to me (though this little boy insisted that "they like fighting!")

So Pikachu (the bright yellow guy) became Moses, leading his adorable-yet-ornery minions away from the masters, through the splitting seas, with the ageless cry... 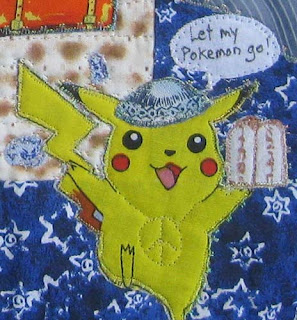 I forgot most of these characters' names - your kids or grandkids know. This cover was a huge hit with the youngsters over the years. Somewhere along the way, it developed an authentic Maneschewitz stain. 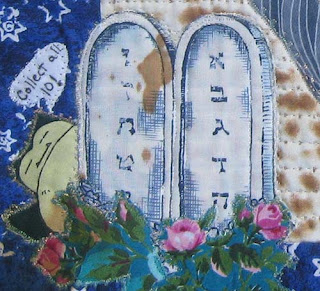 The yellow duck in the next photo has the superpower of causing headaches. I added a kosher certification on the pig-like entity. (He's saying, "Next Year in Tokyo!") 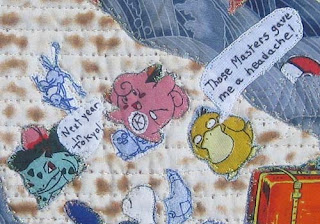 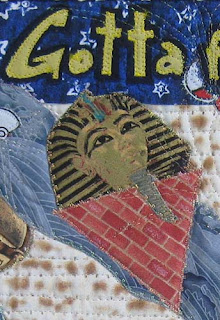 The trompe l'oeil matzoh fabric was purchased from 1800dreidel.com. (Similar fabric is also sold by Sunshine Sewing ). It looks exactly like matzoh, and when quilted in lines parallel to the rows of dots, it feels bumpy-soft-good, and so realistic that your guests may try to slather it with charoset and take a bite!

Next, a cover made primarily from batiks, maybe in 2005. 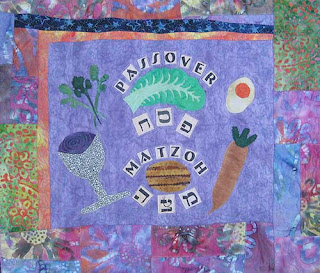 As I recall, my quilt-world idol Jane Sassaman's wonderful book The Quilted Garden (no affiliation), inspired me to photocopy, draw, and redraw a leaf of romaine lettuce a whole bunch of times before coming up with this stylized version. 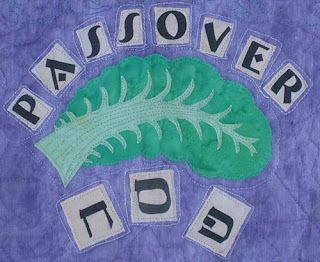 The entire piece wound up about 24" wide by 20" high - too big for a crowded seder table, but works great as a wallhanging.

Next, another matzoh cover that accidentally grew too large for the table - 35" at its widest. It's octagonal. 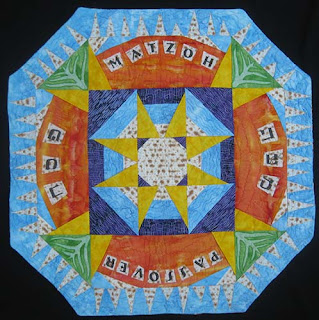 All the yellow triangles are 3D, with a folded edge along their hypotenuse, tucked into the seam. Detail: 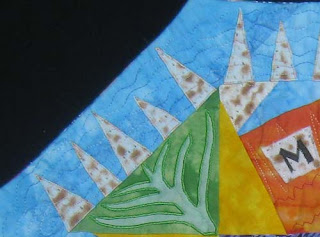 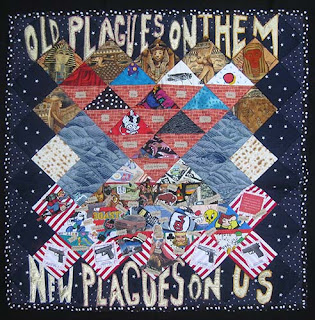 It's 25" square. The top portion shows the traditional plagues: 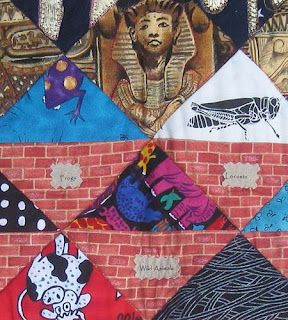 Those labels read "Frogs," "Locusts," and "Wild Animals". (Yes, that cow is supposed to be upside down. She's ill. Cattle disease was one of the plagues.)

The bottom half shows what, 15 years ago, I considered to be modern-day plagues. These included: handguns, pollution, narcissism, steroids...

...endangered species (they themselves aren't plagues, but the whole endangerment thing I courageously oppose), despotism, bigotry (under a kingly figure who foreshadows 2016 political candidates?), soda, and, um, cell phones?! I can't recall what I had against cell phones, which were new at the time. I think because people were driving while talking on them. Plus, mine didn't work too well. 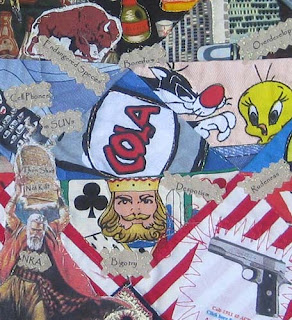 Here's another small matzoh cover that I considered for the show, but decided it was too tiny - maybe just 12" high. 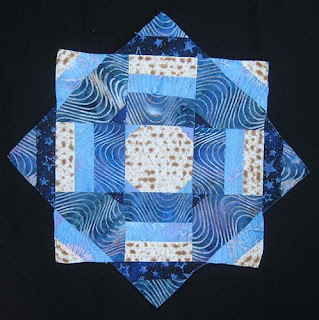 Made with a wavy blue batik. I wish I had written down how I strip pieced it, because I  would like to make another one.

And finally, I hung my matzoh tambourine in the show. Double rows of large plastic buttons around the edges rattle. It's stiffened with plastic canvas, and measures about 12" across. 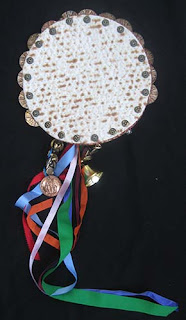 For many more Passover items, see  this blog post, from last February. Want to stitch your own Passover  textiles? Join the fun - find inspiration and information - in the Pomegranate Guild of Judaic Needlework!

For more connections between quilting and Pokemon, check out this recent blog post.


Posted by Cathy Perlmutter at 4:22 PM