153 More Backwards Scraps on the Wall

Happy 2017! Here's a New Year's diversion, explaining how I went from here... 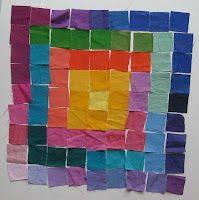 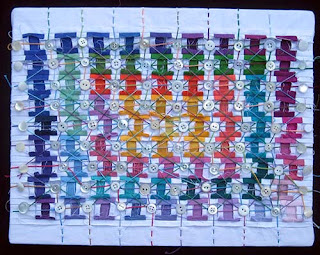 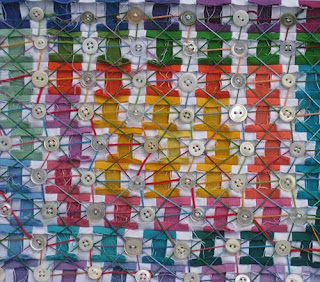 ...in just a few steps, and it was more logical than you might think!

It all started when a challenge in Machine Quilting Unlimited magazine set me on a path of cutting out and arranging hundreds of 1.5" squares. My first experiment was with batik scraps, and I wound up displaying the seamed side. It's in my post from two weeks ago.

Now I was completely hooked on squares, especially the 1.5 inchers. The first photo below is a trial 9  x 9 grid of solids. 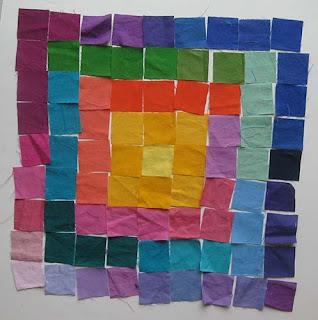 Nice, but what if there was a white sashing between all the pieces.... 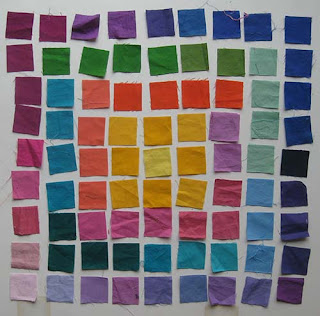 Or white sashing in only one direction? 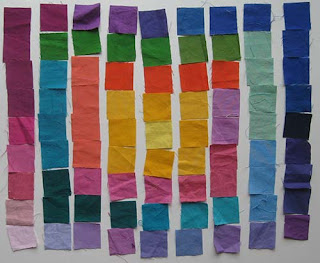 How about offsetting the columns? 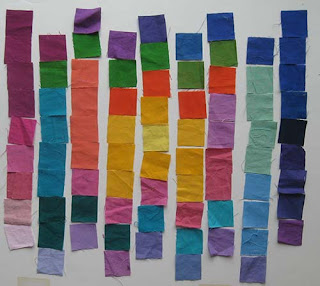 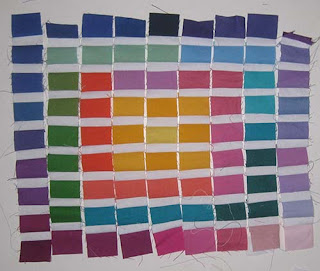 I lined up some of the colored squares with each other, and offset other rows, which required a plenty of pinning.

Below is what I was aiming at - squares that more or less line up with each other for the top four horizontal rows, and then wiggle back and forth for the bottom four rows. 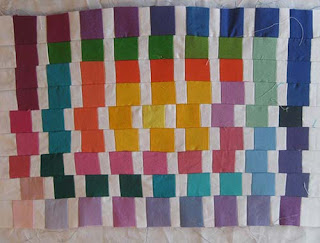 The proportions were way off - it looked squashed. But then, I looked at the back: 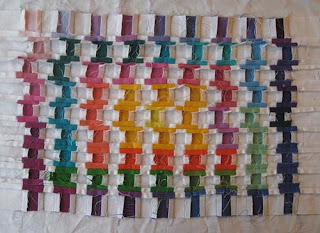 Cool! There were textured capital I's or sideways H's/barbells! [Update: One reader saw thread spools!] And, like my earlier quilt, there were cubbies with flaps, begging to be filled! I couldn't have accomplished that if I tried! 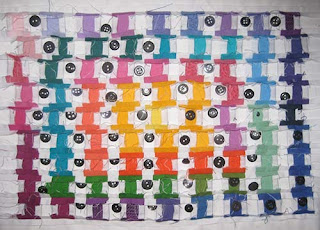 Nah. How about white? 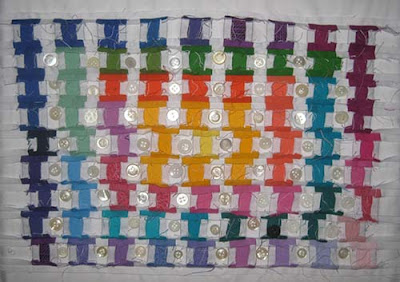 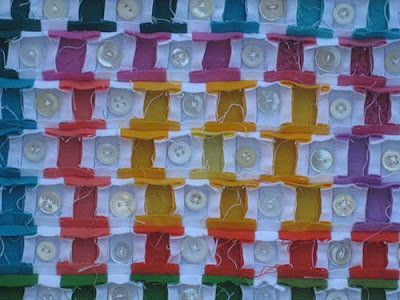 But I still wasn't ready to hide the "right" side. I wanted to have it both ways -  to show off the simple front and the complicated back. That meant I couldn't make this a quilt with batting. I had to do something strange.

Whenever I have an urgent out-of-the-box quilting dilemma, I post to the Quiltart list, where innovative quilters - from beginner to legendary - share ideas. Several chimed in, including the following three (and I have their permission to quote them here).

First, my cyberfriend Blue brainstormed with her husband, and came up with this genius idea: A wall-mounted swing-out towel rack. (This one is from Bed, Bath and Beyond, and there are many others. Some are sleek metal. No financial affiliation): 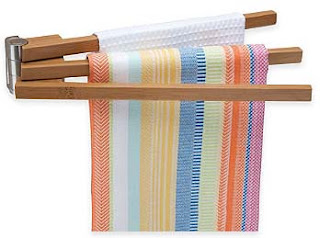 "That way," Blue wrote, "You could swing [the piece] to one side when in the mood, or to the other side when in that mood." In a billion years I wouldn't have thought of that.

Another unique idea from Blue: "Hang...it from a certain distance from the wall and then using silver metallic (black-out curtains) pinned to the wall or curtain, thus reflecting whatever side you wish to." Hmmmm - taking that idea a step further - should I install a mirrored wall in my house? My 1990 condo had one, and I never appreciated the mirror tiles for their quilt hanging potential!

Her third idea: "Could it be hung from a piece of ruler-like wood, then an eyehole pin inserted in that wood, with a corresponding hanging hook in the ceiling, and some fishing line...so that...it could be spun around? Think Calder and his mobiles!"

My quilting friend Phyllis Cullen, awesome Hawaiian quilter, weighed in with another ceiling idea: "You can mount it on stretcher bars, or make a sleeve or loops that project from the top, and inset a swiveling bar to hang, or allow it to be hung from the ceiling so both sides can be seen."

A third creative thinker, Eleanor Levie, wasn't so optimistic. She shared: "I'm always sorry when I try for a reversible product, because I end up compromising the effect on one side to make the reverse side work neatly and aesthetically. Don't try to do it all, girlfriend. Trust your instincts and experience. Pick a side."

Could they all be right? Why yes, they could!


I decided to try a variation of Phyllis' idea. I took an inexpensive 11" x 14" stretched canvases from the craft store. Pulled out the staples holding the canvas, leaving only the wooden frame. Then stapled my piece to the wooden frame and hand-stitched the buttons for good: 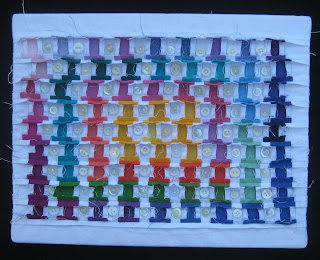 Below is the back of the piece. I carried the crochet thread holding the buttons. Eleanor was dead right: The back is messy. primarily because the two vertical sides of the fabric aren't long enough to cover the wood, like they do on top and bottom. If I were to actually exhibit this,  I'd have to take it off the frame, lengthen the sides, and even then it might still be messy (other suggestions welcomed!) 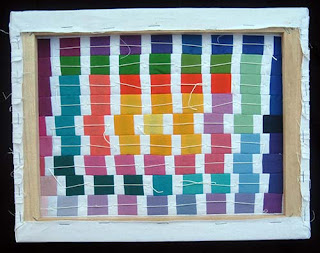 Next, on the new right side, I wrapped colorful embroidery floss from button to button, going over one, down one. In my first experiment, I also wove in white cord. 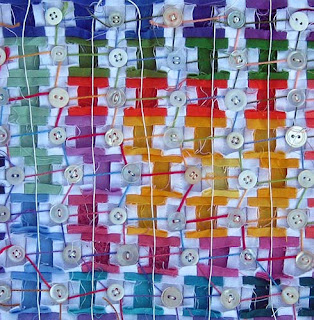 Didn't like the white, so I removed it. The final weave is below. Because all the squares were not lined up perfectly, the strings made unusual angles. 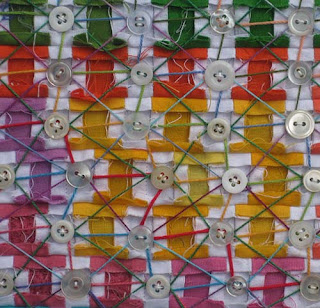 My final step was to extend the colored floss via stitching from the outermost buttons into the borders.... 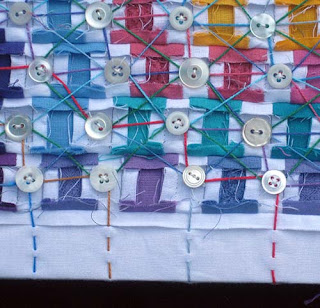 And around to the back, where they end in a knot. 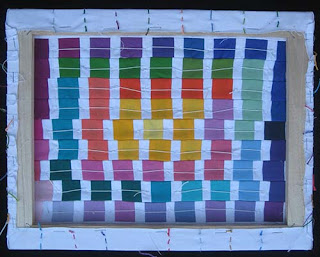 The fun of this piece to me is looking at how complicated it looks from the front, and then flipping it over to see how simple it really is.

By the way, I also experimented with displaying the piece in an embroidery hoop...... 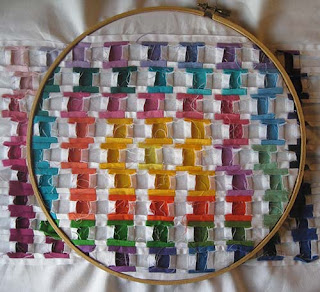 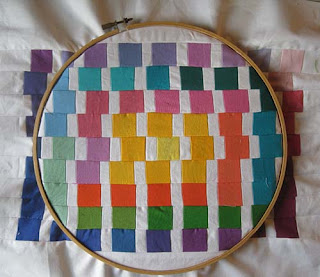 That didn't work out too well, either. but I think with a round design it might work better.

Thanks so much to Blue, Phyllis and Eleanor for sharing your ideas and advice!

And thanks to another extraordinary Quiltart list member, Margaret Cooter, who told me about the work of Inge Hueber, a well-known German quilter. Backs are Inge's thing! See Inge's inside-out work at http://ingehueber.de/collections/.
Posted by Cathy Perlmutter at 9:11 AM