Quel Fromage! This Quilt Is Cheesy!

There are many stacks in my sewing room, and one is comprised of potential handmade gifts: small quilts, brooches, fiber necklaces, and of course, UFO's - unfinished objects.

When planning a visit with an old (or new) friend who has admired my creations, I go through the pile, searching for something they might like; if necessary, I finish and personalize it for them.

It's a challenge if I don't know the person well and/or have never seen their home. What's their style? Minimalist? Flea market clutter? Black-and-white? Rainbow?

So I often bring choices. We recently headed for a week in the French Alps - my DH to teach, while I would be gloriously free all day to do this: 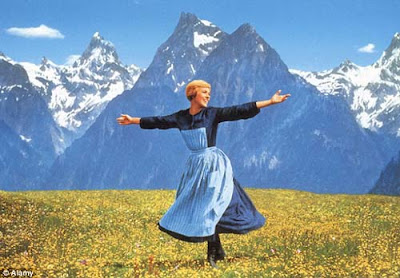 ...Plus, on one day, have lunch with a friend from grad school who I hadn't seen in 30+ years. He's an American expat living in France, a writer, erudite, sophisticated and kind, all of which I detected from being Facebook friends with him for several years now.

I pondered what quilt to bring him and his wife. I had this small striped quilt from my Ann Brauer experiment days. 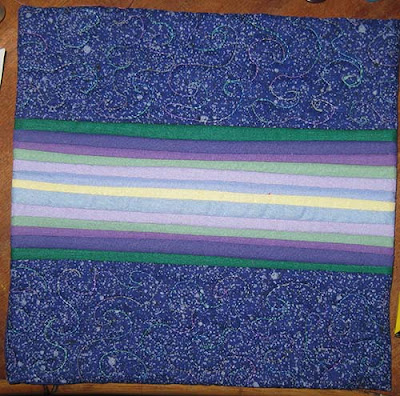 Sophisticated, but perhaps lacking personality.  I have a natural horor vacui, an allergy to unoccupied space. So I sewed a button on it. One button led to another and I sewed 13 on it. (Some are stacked.) 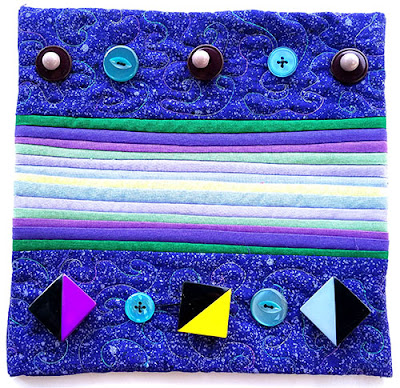 I may have overdone it. As a counter-offer, I brought this small eclipse quilt, mundanely named Eclipse #4. 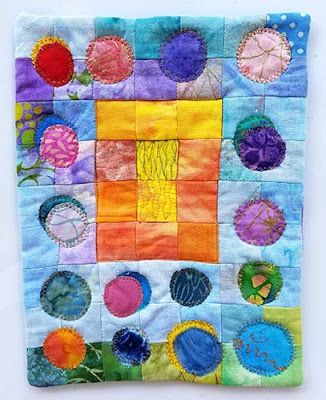 (In real life, the colors are more muted than in this photo). I would let my friend decide.

The first clue to his taste was his suggestion from the menu items. He recommended the tartiflete.

What, you may ask, is a tartiflete? The word, which rhymes with "hearty PET," trips poetically off the tongue, sounding to me like someone who is a combination of a tart and flirt: O Tartiflete, ma petit chou, tu me tuer! ("Oh Tartiflete, my little cabbage, you are killing me!" according to my high school French.)

But a tartiflete is no cabbage - it is a Savoy regional food made with potatoes, onions, cream, butter, and a whole lot of, OMG, Internet recipes are showing me massive hunks of bacon LARD being chopped into little bits and thrown in! Now I have to apologize to my doctor AND my rabbi! 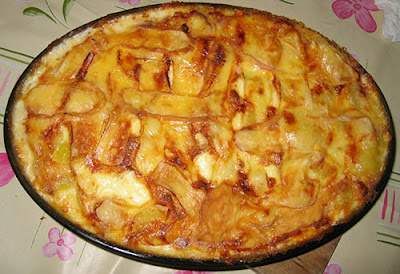 Ours wasn't quite as bumpy.)

What makes the dish fabulous is its crusty brown goo of reblochon, a French cheese that Wikipedia says is "smear-ripened," which is not only something that happens on Twitter; in cheese the smearing is done with bacteria or fungi "which...gives them a stronger flavor as the cheese matures," says Wikipedia.

And if that's not intense enough, "reblochon" comes from the French verb "reblocher," which means "to pinch a cow's udder again..." Ouch?


"This refers to the practice of holding back some of the milk from the first milking. During the 14th century, the landowners would tax the mountain farmers according to the amount of milk their herds produced. The farmers would therefore not fully milk the cows until after the landowner had measured the yield. The milk that remains is much richer, and was traditionally used by the dairymaids to make their own cheese."

The US government considers reblechon too dangerously unpasteurized to permit into the national arteries -  but, Wikipedia comforts us, there's a tasty and legal substitute for it called Delice du Jura.

Back to our luncheon - as you might expect, the tartiflette was delicious - how could it not be? Only my friend's fine continental manners kept me from licking my plate clean.

On top of that, he presented me and my husband with a weighty hunk of a DIFFERENT delightful cheese, tomme crayeuse, also unpasteurized, similarly covered in white mold with tantalizing fungal smears. Here it is (after I'd downed a few slabs): 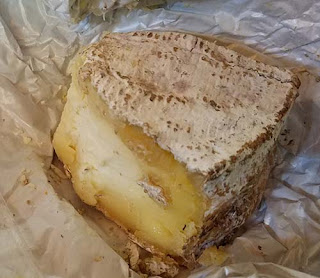 So, back to our choices: now that you know him a bit, which quilt do you think my friend choose after our luncheon? 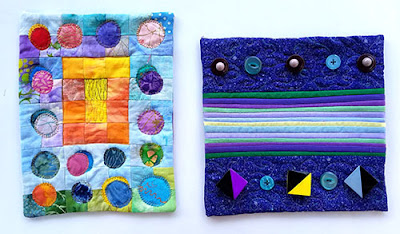 Yup, he immediately went for the quilt on the left, the quilt that displays what I had intended as a sunny slice of the sky with forebodings of eclipse, but which I now recognize as cheese. It even has moldy golden veins. 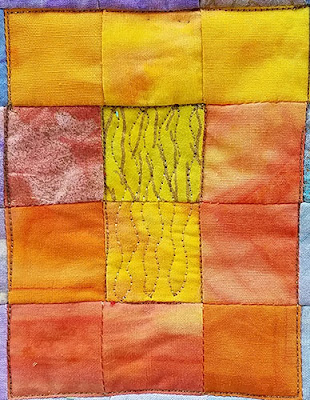 (Disregard that the orange is closer to the color of Cheez Whiz.)

The circles surrounding the cheese on that quilt are no longer moons and planets  - they're mold spores whizzing around in excited adoration. I am even giving this quilt a new name: "Tartiflete," bien sur.

Remaining questions that burn in my newly-smear-ripened soul:

1. Shall I now make an intentional cheese quilt?

2. Shall I include the wrapper from my amazing gift cheese, so my cheese quilt can have a scratch-and-sniff component?

3. Or should I forget cheese and just make quilts about the amazing Alpine view? 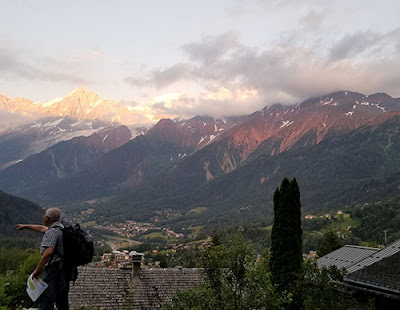 P.S. I just discovered many textile artists inspired by cheese at Spoonflower, the custom fabric printing company (no financial affiliation). They sent me a notice for a BOGO fat quarter sale this weekend (through Monday), so just for the heck of it, I entered "cheese" in their search engine. Lots of choices came up, including this tasty design by Charlotte Winter here: 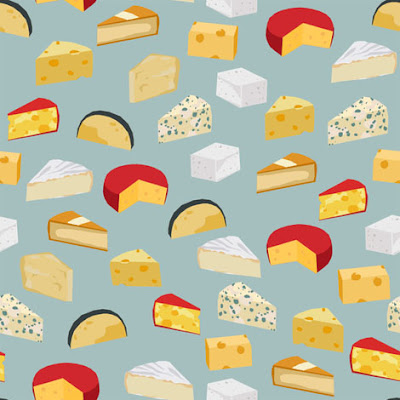 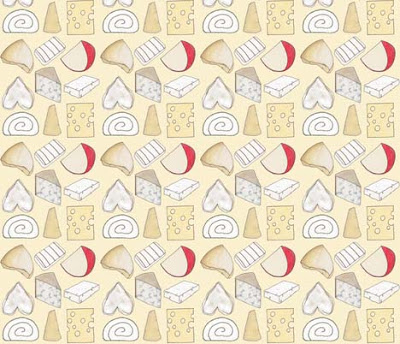 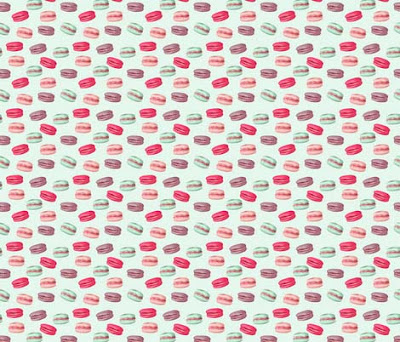 Yum!
Posted by Cathy Perlmutter at 8:20 AM