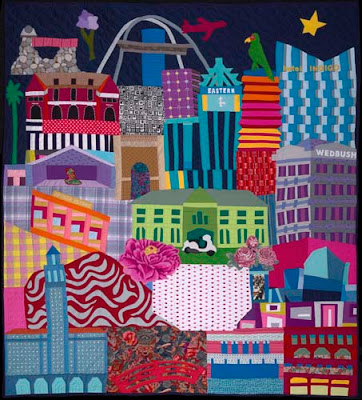 It's a wedding present (a scant year-and-a-half late!) for my dear friend Elizabeth and her groom Rick, who whisked her away to the East Coast, leaving her family and friends happy for them, but sorry for ourselves.

In my first LA quilt, I recreated significant buildings that would be fun to translate into fabric. For this quilt, I consulted  Elizabeth's mom to make sure I included Elizabeth's most meaningful sites. 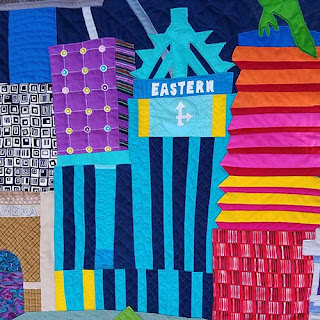 Although most of my buildings are fantasy colors, the Eastern Building really is blue-green. Find pictures of the real thing here.

My other favorite building on the quilt is the LA airport's Theme Building. It looks like the Jetson's house. 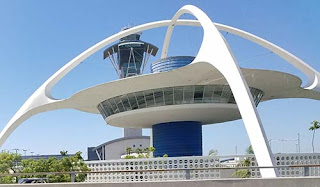 It was built in medieval times, back in 1962. The sci-fi style is called "googie" architecture - completely unrelated to Google. Here's my slightly wobbly interpretation, using bias. 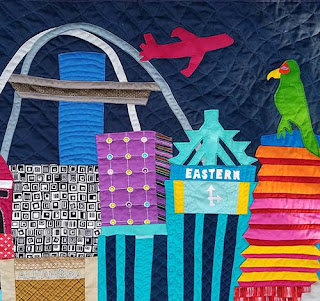 To the right of the Eastern Building, there's Capitol Records, upon which I planted a green parrot - our area is infested with these screaming birds, which are charming or a nuisance, depending who you ask. (I vote: Both.)

The trendy Hotel Indigo has a major presence on the 110 Freeway; its structure screams "bargello"! In the quilt world, bargello is an easy strip piecing-and-offsetting technique, so I had to include it, 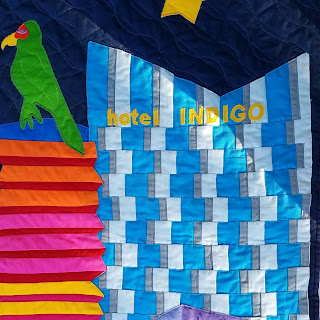 Below it, Wedbush is a bank which has also an impressive presence on the 110 downtown. There area all kinds of interesting curves, which, alas, were lost in translation.... 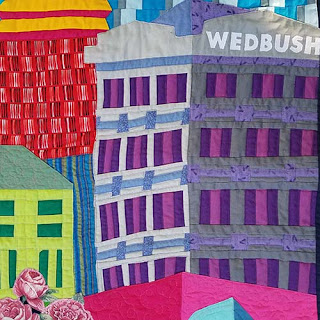 Below that, I set the remorselessly pink Paul Smith boutique in Melrose, against whose walls millenials flock to take selfies. On the quilt, it serves as the backdrop for Disney Hall, which I interpreted in blues. In the lower left area of the photo below, I set a piece of novelty fabric depicting an orchestra - in the real world, this part of the building often has a banner advertising shows at the hall, including for the awesome, resident LA Philharmonic. 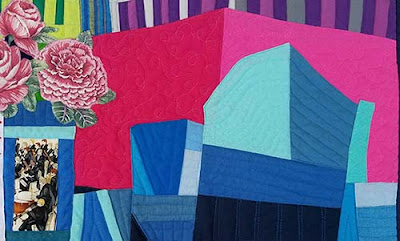 The angular Broad Museum is made from a new pink diamond print. The Broad is white in real life, but the windows aren't pink. 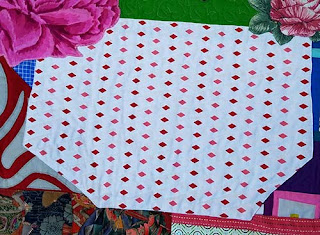 Under it is the fanciful Mayan Theater, covered with elaborate tiles. I found some print fabrics that had a similar look. 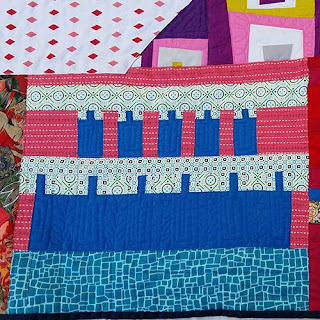 The lower left corner includes the Japanese bridge at Descanso Gardens; LA City Hall (which I turned blue); and above it, the  way-out-of-the-box Peterson Automotive Museum, which really is those colors, and shaped like a car. 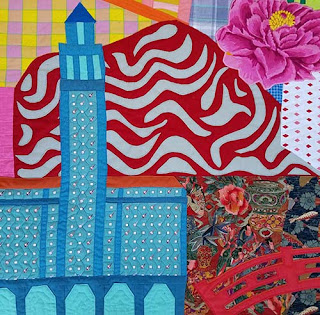 Pasadena's Wrigley Mansion/Tournament House holds the center - I made it green, possibly because of its vast green lawn. 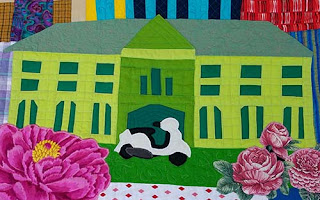 I parked a white scooter and plenty of roses in front because Elizabeth is a volunteer for the Tournament of Roses parade; she comes home for New Year's, dons a classic white suit, and rides around town on Pasadena's most prestigious vehicle! 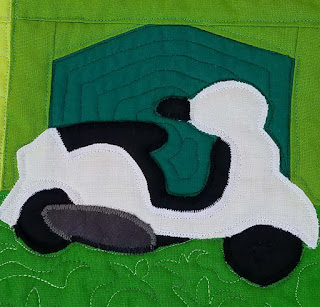 Above, the Angel's Flight cable car, which I recreated in citrus colors; The Greek Theater, in purple, with a cello-playing frog onstage... 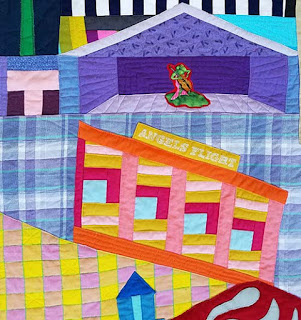 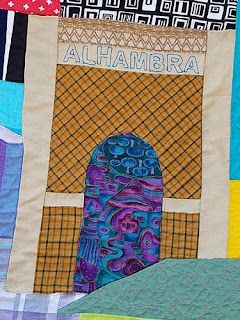 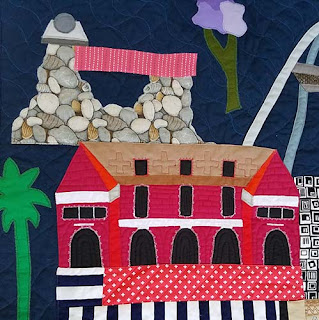 And more! I will miss this quilt - but am consoled because a friend who is an amazing art quilter showed me that I could upload photos to the custom printer Spoonflower.com; they print them onto a lovely organic cotton sateen. I bought a fat quarter. When this FQ started out, it had 8 (full) copies of my quilt, each about 9" across. But Spoonflower lets you adjust the size - obviously, if I'd gone for bigger copies, there would be fewer on my fat quarter. 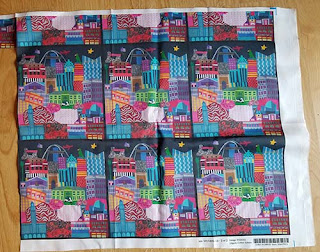 As a "thank you" gift for Elizabeth's mom, I cut out one of the panels, and added borders and cornerstones. With batting and backing, voila, you've made a wallhanging in a fraction of the time it took to make the original! 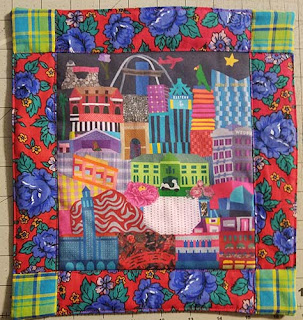 For another friend who's a Los Angeles expatriate, I made this pillow. 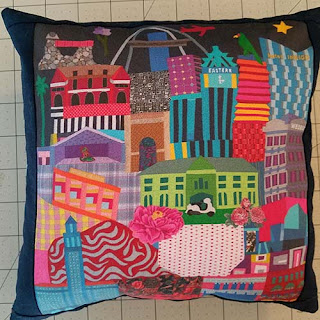 For her, I put my Chicago quilt on the back; 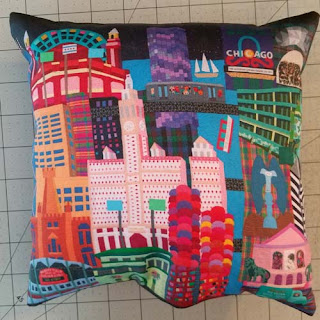 If you're interested in making your own city quilt, my methods are in my inexpensive student booklet, "Log Cabin Skyscrapers & Modern Quilt Buildings Student Guide," at https://www.etsy.com/listing/721798858/log-cabin-skyscrapers-modern-quilt.

And if you'd like to own a picture of this quilt on a poster, travel mug, or clock, you can buy them here! (Attention quilters: Redbubble -and sites like it - are a way to give away your quilts and keep them too!)

Posted by Cathy Perlmutter at 9:18 AM