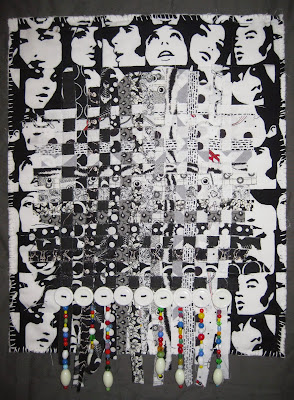 Chiarascuro. What a beautiful word. Do you know it? It's Italian, for light/dark, and its origins (says Wikipedia) are in Renaissance Italian artists who used dark ink and white gouache paint. It's acquired new meanings since, in art, photography, and film, usually connoting dramatic contrast.

A few years ago, as a part of the Fast Friday Fabric Challenge, I had a month to make a chiarascuro quilt. After learning the term's meaning, I went through my stash of black-and-white (and sometimes grey) quilting fabrics, and pulled out a bunch, including:

Even though the color range of these fabrics is limited, they vary dramatically in value. Value is the most powerful concept I've learned as a quilter. Like chiarascuro, value is about light and dark - chiarascuro is an extreme way to approach value. In quilting, value - relative lightness and darkness - is often more important than color. Profound truism recited by quilt teachers: "Color gets the credit, but value does the work."

Contemplating value also directly transports the brain to The Zone: Beyond thoughts and words, completely engaged, where we wish to dwell forever.

Another deeply meditative thing for anyone who works with fiber (or paper) is weaving. There's just something so primal about over, under, over, under. It's a mantra. As a kid, I loved weaving those little potholders, and I still do. 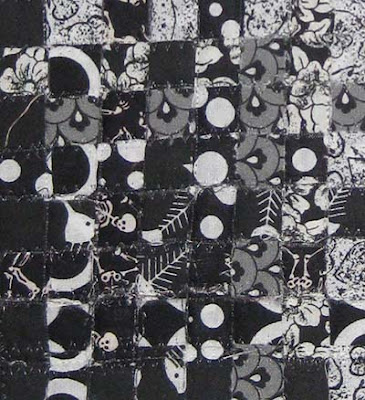 So I took the aforementioned high-contrast black-and-white prints to the cutting board, cut off half inch strips, and sorted them into five piles - dark, med-dark, medium, med-light, and light.

To ascertain value, one must squinch one's eyes, which will give one wrinkles, but they're worth it. (OK, to forestall crow's feet, you could also look at them through the wrong end of a binoculars, or a piece of red plastic with a regal name. I bet that's why Twiggy still looks young.)

I wove the strips on top of a rectangle of fusible interfacing, glue side up. The lightest strips went horizontally across the top, and vertically down on the far right. The horizontal strips darkened in color moving down, and the vertical strips darkened moving to the left. This resulted in the light area in the upper right, which seems to travel and fade to the dark area on the lower left. And high contrast checkered areas in the upper left, and lower right. Value magic! 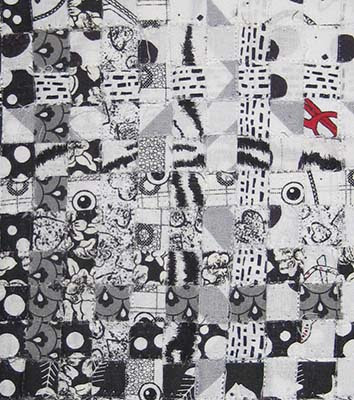 Once woven, I pressed the strips in place, added a border of the groovy faces, created a fringe with the excess vertical strands, white buttons and colorful beads (Boy, did this quilt need some color! The heck with value and chiarascuro!) 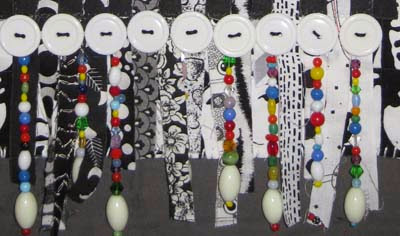 It was backed with batting and backing fabric. The edges were handstitched with a blanket stitch.

I gave it as a present to a dear friend, but really, the present was to me, for the time I spent in the happy value/squinting/weaving zone!

Posted by Cathy Perlmutter at 10:32 PM